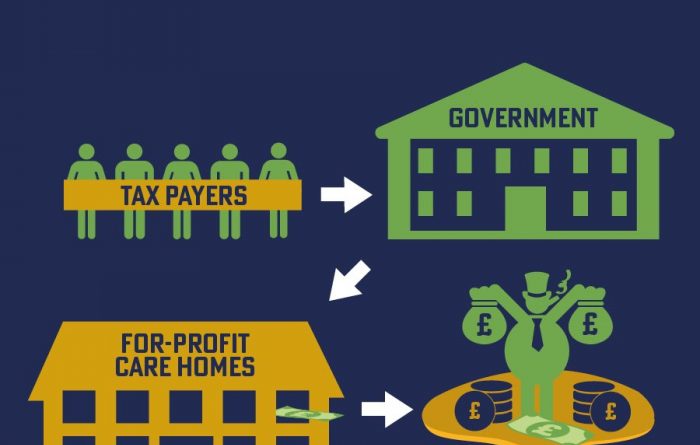 Analysing data from the Care Inspectorate, Scottish Social Services Council, Labour Force Survey, and company accounts, it is the first study in Scotland to systematically track investment in private, voluntary and public sector care providers and the extent to which this affects quality of care, Fair Work, and value for money.

Despite the extensive international literature linking financialised and privatised care with poor outcomes and excess profit extraction, the Independent Review of Adult Social Care in Scotland (the Feeley Review), commissioned by the Scottish Government to provide a blueprint for its National Care Service (NCS), ruled out ‘nationalisation’ claiming that public ownership of care services does not affect the quality of care; and, even if it did, public ownership would be too expensive. The STUC’s research, shows this to be wrong on both counts. Large privately owned care homes perform worse than not-for-profit care homes at every level.

Worse for those receiving care: Nearly 25% of care homes run by big private providers had at least one complaint upheld against them in 2019/20, compared to 16% in the rest of the private sector and 6% in homes not run for profit. Privately owned care homes invest less in the staff providing care. Whereas 75% of not-for-profit care home revenue is invested in staffing, this falls to 58% in the private sector.

Worse for care workers: Over the last six years, the public sector has paid on average £1.60 more per hour to care workers in other sectors. Workers in the private sector are less likely to be unionised and have any form of effective voice. Large for-profit homes also appear to have more stretched staffing resources and fewer senior carers, and therefore less progression routes, than other types of providers.

Worse for the taxpayer: The most profitable privately owned care homes take out £13,600 per bed in profits, rent, payments to the directors, and interest payments on loans. This represents £28 of every £100 received in fees. This compares to only £3.43 of every £100 for the largest not-for-profit care home operators.

The authors do not claim that all this extraction is illegitimate or that it all constitutes profit extraction, though some cases show these flows do appear to constitute hidden profits. Nonetheless, this differential is clear evidence, contrary to the Feeley Review’s assertions, that there are systematic differences in the way that the largest providers – for-profit and not-for-profit – spend the money they receive from both self-funding residents and the public purse.

In total, the researchers estimate ‘financial leakage’ to private care homes to be in the region of a staggering £100m pa. This is money that could be used to transfer the Scottish care home estate out of private ownership gradually over time. In conjunction with Barnett consequentials from the UK government’s national insurance tax rise, Scottish National Investment Bank loans, ‘care bonds’ or capital borrowing, this could pay for itself within a matter of years. The alternative, pumping more money into highly financialised care home chains, is like pouring water into a leaky bucket.

Yet that it is effectively what the Scottish Government’s recently published National Care Service Bill does. Taking its lead from the Feeley Review, it does not deal with questions of ownership, instead proposing to centralise commissioning and outsourcing procedures, transferring potentially tens of thousands of local authority care workers, to a new, undefined organisation. Not only does this undermine local democracy and have extremely serious implications in terms of local government funding, but it fails to fix the leaky bucket. The Bill does not address sectoral collective bargaining in social care either, an issue the Scottish Government have been stalling on since the Fair Work Convention recommended this in 2019, being the key demand from unions to help improve terms and conditions in the sector.

Positively, Scotland’s financialised model of care provision appears to be increasingly recognised as a problem. The STUC’s research was launched at a packed event held in the Scottish Poetry Library at the end of June, secured coverage in the Daily Record, Scotsman, Herald and National, and on STV and the BBC, and won support from the Care Home Relatives Scotland and Commonweal. Questions have been asked in the Scottish Parliament and the STUC has subsequently met with the Minister for Social Care, the Minister for Fair Work, MSPs from SNP, Labour and the Greens, colleagues from COSLA and partners in the voluntary sector. The STUC has also established a care affiliates group, involving UNISON, GMB and UNITE which meets regularly to take forward joint work.

A truly transformative NCS must be based on a not-for-profit public service, delivered through local authorities with an ongoing role for the voluntary sector, and the introduction of sectoral collective bargaining to improve the pay and conditions of this highly skilled workforce. Those are the issues that STUC, our care unions and a range of partners will be campaigning on over the next year as the Bill makes its way through Parliament. It is time we had a National Care Service worthy of the name.

Francis Stuart is a Policy Officer at the Scottish Trades Union Congress (STUC). The full report can be found at https://stuc.org.uk/files/Reports/Profiting-from-Care-Report.pdf