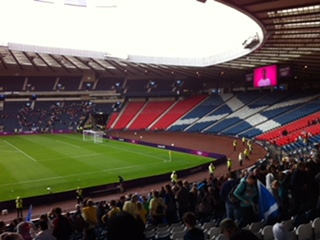 Scotland are out of the World Cup. Nonetheless the STUC, acting on the Congress motion – see below – has resolved to call a major protest involving leafleting, red card show and collection for the bereaved families – at the Scotland v. Ireland match on Saturday 24 September from 5.45pm onwards outside the main entrance at Hampden Park. We are asking for union activists and the left in Scotland to unite in support of this initiative (which is also backed by Amnesty International). You can volunteer by contacting me (Dumfriestuc@gmail.com) and I’ll liaise with Francis Stuart of STUC (fstuart@stuc.org.uk). We need large numbers to cover all approaches to Hampden Park.

Many of the victims’ families are still in debt to the recruiting agencies for their sons’ travel costs to Qatar. Once they got there, they had to work long hours in hellish conditions of heat with no union rights and no effective health and safety rules to protect them. The money collected at Hampden will go to help establish a migrant rights centre in Qatar. To give people an idea of what the living and working conditions are like that the migrant workers are having to endure and often die as a result of, some examples are useful.

Mohammad Shahid Miah, 29, from Bangladesh died when floodwater in his room came into contact with an exposed electric cable, electrocuting him. In India, the family of Madhu Bollapally have never understood how the healthy 43-year-old died of ‘natural causes’ while working in Qatar. His body was found lying on his dorm room floor.20-year-old Ghal Singh Raj from Nepal had secured a job as a cleaner through his family paying £935 to recruitment agents. He committed suicide a week after arrival in Qatar.

Though FIFA Executive Committee members knew that Qatar had only two small stadiums at the time of the decision in 2010 to allow it to stage the World Cup, they still voted to approve the bid on the promise that 9 state of the art stadiums would be ready for 2022. That timescale meant all year round working on construction with summer (shade) temperatures often reaching 50 degrees centigrade. The FIFA Executive majority (bribed by Qatar) ignored this with catastrophic consequences for thousands of migrant workers. A subsequent FIFA internal inquiry into the decision was launched in 2015 but has still to report. The British and Welsh TUCs have been asked to sponsor similar collections at England and Wales home games on the following two days.

Congress condemns the deaths of more than 6,500 migrant workers (mostly from India, Pakistan, Bangladesh, Nepal and Sri Lanka) in Qatar in the 10 years since FIFA awarded them the 2022 World Cup Finals. This was due to the hazardous working and accommodation conditions and the lack of health and safety in the rush to construct the stadia and infrastructure in conditions of extreme heat. Although the Kafala system (which denied contracted workers the right to move jobs or even leave the country without their employer’s permission) was eventually abolished in 2020, there is no effective policing of employers who continue to abuse their workers and migrant workers still do not have the right to form trade unions. Congress also notes that the decision by FIFA in 2010 to award the 2022 World Cup to Qatar is tainted by allegations of corruption. In particular, eleven of the 22 FIFA committee members who voted to take the World Cup to Qatar have since been fined, suspended, banned for life or prosecuted for corruption (including former FIFA General Secretary, Sepp Blatter, and UEFA General Secretary, Michel Platini). For all of these reasons, Congress resolves to initiate (or join if it has already been launched) an international trade union protest campaign aimed at ensuring that:

Qatar passes a new law giving full trade union rights to all workers there irrespective of their country of origin;

Qatar enforces the new law by insisting that all employers issue new employment contracts that explicitly include the right to join trade unions;

FIFA undertakes to secure guarantees of the rights of workers to effective protection under health and safety laws in a country applying to stage future World Cup Finals tournaments before any decision is made;

FIFA ensures that the profits from the 2022 World Cup go to the families of the migrant workers killed and injured in the World Cup infrastructure projects in Qatar between 2011 and 2022; and

FIFA and all national teams taking part in the finals are asked to observe a minute’s silence and wear black armbands in every game in remembrance of the workers who died.