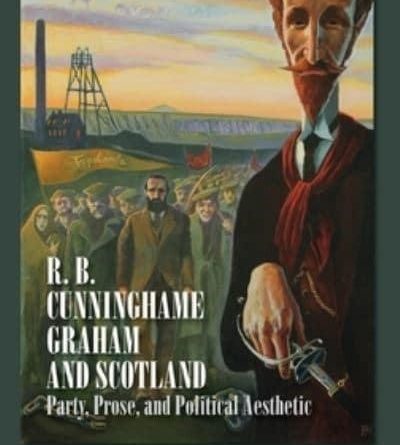 R. B. Cunninghame Graham (1852-1936) was, and remains, the great enigma of Scottish politics. Graham was a quarter-Spanish cowboy in South America; a large Scottish landowner who was the first declared socialist MP in Westminster; and a Justice of the Peace who was badly beaten by the police and jailed while leading a riot in Trafalgar Square on behalf of the unemployed. Graham was also an aristocratic élitist and ‘The Miners’ MP’, who was expelled from parliament on three occasions; an anti-racist and anti-imperialist, who at the age of 62 volunteered for military service and was appointed a ‘colonel’ during WWI; and a friend of the rich and famous, who supported Irish and Scottish Home Rule.

The greatest enigma, however, was how quickly he disappeared from the public consciousness. In 1926, Hugh MacDiarmid described Graham as ‘potentially the greatest Scotsman of his generation,’ and in 1927, The Sunday Post remarked: ‘There are few men nowadays so well known as Mr R. B. Cunninghame Graham.’ However, by 1950, a mere fourteen years after his death, the cultural-revivalist Hamish Henderson asked the question: ‘Who remembers Cunninghame Graham?’

Graham’s extraordinary life and paradoxical personality have inevitably exposed him to exaggerated or simplistic claims, often sponsored by those who wished to promote or justify their own political agendas. Claimed by some to be the founder of the first party of labour – The Scottish Parliamentary Labour Party – although he has been consistently ‘written out’ of early Labour histories, and by others as the founder of the SNP, here, for the first time, Graham’s true roles and significance are examined.

Describing Cunninghame Graham as ‘the most contentious, controversial, and contradictory Scot of his generation’, this thoroughly researched book is the first attempt to untangle the Graham legend, both as a rabble-rousing politician and as a prolific author. Also, for the first time, it examines his political influences, which included William Morris, Engels, and Marx. It examines contemporary local and national newspaper reports, Graham’s speeches, his socialist journalism, but also the memoirs of those who knew him, particularly his early socialist, and later nationalist, colleagues. Most significantly, for labour historians, the book unearths Graham’s close relationship with Keir Hardie, and upturns the belief that Graham was a mere political dilettante. Bruce Glasier, for instance, wrote that Hardie and Graham were close companions for six years, and that ‘went about in harness’. Sifting through reports and memoirs, Munro concludes that it was the high-profile Graham, inspired by Morris, who had the first idea of a party of labour, and it was he who groomed and persuaded a reluctant and unknown Hardie to forsake the Liberals, and against bitter opposition, especially from the unions, to take up the leadership.

Graham and Hardie’s support for Scottish home rule is examined in detail, as are Graham’s evocative Scottish writings, which were deeply political. Most illuminating, however, was Labour’s crucial role in the Scottish home rule movement, particularly standard-bearers like Tom Johnston, Rev. James Barr, Ramsay MacDonald, and Jimmy Maxton. Anyone interested in the early labour movement in Scotland, and how a significant part of it ‘morphed’ into the National Party, then the SNP, as political circumstances and priorities changed, will find this book an eye-opener.

Gerry McGarvey is a community, political and union activist. Previous employment working with a number of Third Sector agencies. Since 2013, he has worked as a freelance researcher, editor and ‘ghostwriter’. He is a co-founder and former Chair of The Cunningham Graham Society.