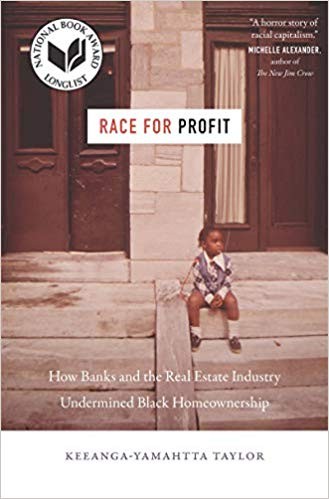 Since the publication of her first book, From #BlackLivesMatter to Black Liberation, in 2016, Keeanga-Yamahtta Taylor (KYL) has emerged as one of the most incisive commentators on the politics of race and class in the contemporary United States. Her new work, Race For Profit, studies the various abortive attempts to expand home-ownership to include African Americans in the 1960s and 1970s. Citizenship and national belonging are practically synonymous with home ownership in the US. The semi-utopian visions of American suburbia that dominated popular culture in the 1950s served as a kind of return to social order after the war. But the government-funded building boom that led to suburbanisation infamously excluded African-Americans, who were almost totally barred from the generous mortgages underwritten by the Federal Housing Administration.

By the 1960s, this systemic discrimination had resulted in a drastic lack of housing for Black families across the United States. Pressure from the African-American Civil Rights Movement certainly added to the need for action on this. Though Taylor also notes the key determining role played by the real estate industry, which identified a new untapped market in single-parent Black families who had previously been shut out from buying their own homes. Under the newly-founded federal agency HUD (Housing and Urban Development), real estate speculators received government funding to sell houses to non-white customers. But this inclusion was simultaneously a form of exploitation; government-backed mortgages were issued to sell poor quality and notoriously rat-infested housing, often to single mothers. When these buyers failed to keep up mortgage payments (which they invariably did, not least because they also had to cover the ballooning costs of repairing the houses), the homes would go into foreclosure, ending up in the hands of the same real estate agents who could sell them to the next unwitting buyer (again receiving federally-covered mortgages).

Taylor traces this bleak narrative from the last days of the Lyndon Johnson administration through the earliest days of Reagan, but with a particular focus on the Nixon era. The result is a brilliantly written and incisive analysis of not just a particular moment in the history of American racism and capitalism but of one whose legacy is very much still alive today. In August 2019, I carried out an interview with KYL, to discuss the book. I began by asking her about her motivations for writing Race for Profit, and to what degree it was a reaction to the crash of 2008.

KYL: It might in some ways be influenced by contemporary questions around what has happened to the housing market – Black homeownership in particular – but really I was interested in this pivotal moment in US policies regarding low-income housing when there was a concerted effort to shift away from state-based provision to market-based solutions that emphasised homeownership and personal property as both an anti-poverty program but also as a means of creating stability in the aftermath of the 1960s. There is a connection to the current crisis. I think of it less as a preview than more of a pattern. This was one iteration. And there are multiple iterations; there are iterations in the 1990s. They appear again with the discourse of an ownership society in the 1990s and early 2000s and then obviously they appear again in the crisis in 2008.

AB: Welfare provision in the US does always seem to have this incredibly strong free-market element to it. Why do you think that is?

KYT: There’s an ideological aspect to it. And then there is a ‘way in which politics functions’ aspect to it. I think ideologically there is a kind of pattern to a hostility to the poor that is at the core of even anti-poverty politics and policies in the US that certainly take much more form in the 20th century when the scaffolding of a welfare state begins to come together. The US has a reluctant welfare state that is always positioned as preserving aspects of the dominant economic system while creating the means for some kind of social provision that is necessary to preserve the political system overall. And so you get different hybrids of public-private partnership. The ‘New Deal’ certainly had those types of characteristics. The Johnson welfare state also had at its core those features of public-private partnership. I think that there are many different explanations that you could point to. It has to do with an ethos of small government when it comes to social welfare. It has to do with the influence of business and the private sector in shaping the political programme of the US state, especially when it comes to social welfare. This is probably most pronounced when it comes to housing policy. The priorities of business are always embedded in the American welfare state. Public housing has always been underfunded, with the idea that it should not compete with the private market. Conversely, the private housing market has always been the recipient of robust public subsidies and other types of public money and public guarantees to make sure that it always was in the predominant position when it comes to the social provision of housing. That is certainly a core aspect of housing policy from the 1930s to the 1950s. The 1968 Housing and Urban Development (HUD) Act is the ultimate cumulative expression of this, where the provision of low-income housing is seen almost exclusively as the domain of the private sector where public influence only is involved insofar as subsidies and money are concerned.’

AB: This ‘privatised’ language, and the kind of practices that you’re talking about, seem very much like what we would later call neo-liberalism. Yet this is all happening before the 1970s. Is this neoliberalism before it was called that?

KYT: I think that neo-liberalism has become one of these catchphrases that means lots of different things. I try not to actually use the term. I think I do end up using it in the last chapter of the book when talking about the early 1970s. I don’t think neo-liberalism is just about privatisation or just about public-private partnerships. There’s something more specific to neoliberalism, not just the question of privatisation. Starting in the early 1970s there is a dogged ideological intervention around personal responsibility, individualism and the necessity for individuals to rise above the vicissitudes of late-twentieth century life. As part of that, there is the degradation of the notion of a welfare state. In an earlier period, there was an acceptance that a welfare state of some sort was necessary but it should have business characteristics. Neo-liberalism is different. Now, there is an attack on the notion of a welfare state in general. I talk in the book about the way that the crises pervading these low-income housing programmes are used as a cudgel by conservatives to undermine the very notion that there should be a social provision to housing. Instead, the narrative becomes that government itself needs to be extracted from the distribution of social welfare and that is something that should be left to the private sector itself. That’s a new idea when it was introduced in the early 1970s. So, I do think that there is something specific about the neo-liberal turn. It happens at a pivotal time of the onset of economic crisis. That crisis creates an opportunity for the elite to re-establish social priorities, to move away from the idea of state provision of welfare and instead see that as purely the domain of the market. Then we get the introduction of the free market discourse as really the institution that has the capacity to free society completely and that also is new.

AB: I want to move away from this and talk about the story you tell in your book about Beecher, a suburb of Flint, Michigan. Here, newly arrived black homeowners were set against white lower-middle class and working-class homeowners. Was there any possibility of an anti-racist politics at this point or what would it have looked like or how could anyone have surmounted those anxieties of white homeowners (many of whom are not incredibly wealthy)?

KYT: One thing that I’m trying to do in the discussion of Beecher is to say the suburban experience even for white people is varied. It is easy to reduce this to binaries: city/suburb and black/white. I try to show that there is not a universal suburban experience any more than there is a universal white experience. And so even as whiteness is confining and constraining it’s also capacious and it is differentiated by class as well. And this becomes a point of tension in the early 1970s when there was a debate about where all this low income housing should be placed. The 1968 HUD Act mandates Congress to create 26m new and used rehabilitated units of housing within ten years. Everyone knows that the cities are too expensive to build in because of land costs and because of insurance (because of the riots that have been going on throughout the mid-1960s). So, if the low-income housing is placed in the suburbs, will that mean poor black people are coming to the suburbs? And, there was a weak welfare state in the US, your individual ability to accumulate wealth and assets is ultimately what determines quality of life. It determines whether or not you can send your kids to college, can have a retirement, or weather a healthcare emergency. And ‘the home’ is for most Americans their largest investment. If you then have working class white people who were living in a working class suburb, right outside of the city, who think that they have escaped the city to preserve their property values and add black people to those very suburbs; it creates a kind of hysteria and panic. And this panic is driven by this larger framework of your house, and whether or not it accrues in value over time, which will determine your family’s quality of life. In that context – and the added context of the onset of economic slowdown in the early 1970s – it’s very difficult to locate examples of solidarity. There are some. There is a very inspiring story of multi-racial solidarity and the refusal, on the part of ordinary white people, to take the bait, in a neighbourhood called Mount Airy, Philadelphia. Another is Oak Park outside Chicago, where was a multiracial organising and multi-racial struggle among white homeowners and black homeowners to defend their homes against the real estate industry which was feverishly trying to get white people to divest from the neighborhood. These few fleeting examples are important insofar as they stand out as what was possible and what could have happened.

But then you have political actors who are framing this in such a way as to tap into and exacerbate racial tensions. This was a key component of Nixon’s politics, particularly in the 1972 presidential election. He spoke about the work ethic versus the welfare ethic. This was part of the shaping of the so-called ‘silent majority’, which was conceived and conceptualised as ‘white people’. This all helped to create a narrative of reprisal and it assigned blame for any future instability that ordinary white people may incur. So, it’s the combination of multiple factors which created this impression that was quite deep and, in many ways, real about the intractability of racial discord in this period.

Aidan Beatty (@AidanJBeatty) is a historian from Ireland, now living in Pittsburgh. He has written extensively on the history of Irish nationalism. His latest work is an essay on Karl Marx, Friedrich Engels, race and Ireland, published in the December 2019 issue of the Journal of Modern History.’