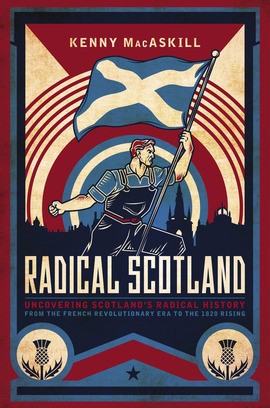 This year marks the two hundredth anniversary of the 1820 Radical Rising, a perhaps lesser known period in Scottish history. On 1 April, proclamations were posted across many towns in Scotland calling for a general strike and for an armed insurrection. Its estimated up to 60,000 workers headed the call to cease work and there were attempts by Glasgow radicals to march on and seize the Carron Company Ironworks at Falkirk in an effort to acquire guns and other weapons. Weavers in Strathaven (my hometown) also attempted to join the uprising upon hearing rumours that the Glasgow strikers had taken control of the city, marching under a banner proclaiming ‘Scotland Free or a Desert’. Government control was lost in some weaving towns and villages in Ayrshire, Renfrewshire and Lanarkshire with strong support for the radical cause in Paisley and Glasgow. The threat of a general rebellion was in the air. However, in a short time it became clear that the insurrection was not proceeding to the Radicals’ plan as the British state mobilised to crush the uprising. Government troops and Yeomanry forces quickly overran the poorly armed Radicals marching to Falkirk at what became known as the Battle of Bonnymuir, ending any hope of widening the rebellion. The repression after the uprising was put down was brutal with leading Radicals Andrew Baird, John Hardy and James Wilson all executed for treason by hanging and then beheading.

MacAskill actually focuses on a much broader timescale than just the events of 1820 – he tells the story of the tumultuous period following the American and French Revolutions, and the leading figures of the subsequent movements fighting for political reform. He attempts to tease out the roots of the radical movement and the twists and turns between the various movements, from the Friends of the People through the United Scotsmen to the later Radicals. He argues that the events of the French Revolution in particular were instrumental in awakening the desire for radical political and constitutional change, in the same way the Bolshevik revolution of 1917 inspired explosive post first world war period of class struggle.

He introduces the book with a reflective piece about the Political Martyrs Monument on Calton Hill in Edinburgh. While the landmark obelisk might be easily recognised by many, fewer will know the history of the people commemorated. The book is an attempt to flesh out these characters and the history of their movement: the fight for political reform.

The rotten and corrupt nature of politics within the time period is richly illustrated by the example of the election for the constituency of Bute, Ross and Cromarty in 1788. On the day of the election, weather was so poor that travel to the Isle of Bute was impossible, therefore only one candidate was on the island when the vote took place. He was nominated (by himself) and seconded (by himself in the role of Chairman) and voted for (also by himself as sole voter on the island). He even administered the oath of office on himself and declared himself elected. One man, one vote indeed!

The desire for political reform was, therefore, obvious. The goal of universal (male) suffrage and annual elections formed the heart of all the movements discussed in the book. Perhaps surprisingly from the SNP MP for East Lothian, the nationalistic nature of the struggle is downplayed. MacAskill argues convincingly that the struggles in Scotland formed part of the wider struggles in England (even though they were not formally linked). The movements were mostly for political reform of British parliament, not for overthrowing the Treaty of Union. Throughout, MacAskill attempts to get beyond some of the mythologising surrounding the movements of this era, and look at the material economic and class roots of the struggles. Excellent explanations of the roots of the subsequent movements within the friendly societies (a proto-union movement) and clarity navigating the religious ideas of the time are most useful in understanding why the radical movement flourished in the highly literate and often religious dissenting weaving communities.

MacAskill manages to shine a light on some of the hidden, or not so well known, aspects of the time period. There are presumably few readers of Scottish Left Review that are not aware of the events of the Peterloo Massacre in Manchester of 1819 but perhaps not so many will be familiar with an equally shocking massacre in Tranent in August 1797. Following a protest against the Militia Act (see below), Government Dragoons ran amok indiscriminately attacking protesters and people from the surrounding countryside. Eleven people were killed and many seriously injured. The subsequent military coverup to the atrocity meant no soldier or any member of the authorities were charged.

In a very timely way, MacAskill highlights the well-known fact that history is written by the winners. The current Black Lives Matter campaign to pull down statues or rename streets shows there is a desire to reassess who we commemorate. Throughout, he questions why there are statues and monuments to leading government figures at the time but very few to leading figures in the radical movements for political reform. The book is a welcome addition to understanding the radical movement in Scotland and putting in context with the movements in Ireland and England.

Gordon Leggate is a climate activist and member of Socialist Workers’ Party. He hails from Strathaven, Lanarkshire and so has a particular interest in the local history surrounding the 1820 radical rising.

According to Tom Johnston ‘the histories of our land have been mostly written to serve the political purposes and flatter the conceits of our aristocracy’. Kenny MacAskill’s book is devoted to the workers’ struggles in the late 18th and early 19th centuries. There are prominent statues to Henry Dundas (who was instrumental in delaying for 15 years William Wilberforce’s parliamentary monition to abolish the slave trade), Admiral Nelson, and the Duke of Wellington in Edinburgh city centre but hidden away in Old Calton Cemetery on the east side of Princes Street is a memorial to the political martyrs Thomas Muir, Thomas Fyshie Palmer, William Skirving, Maurice Margarot, and Joseph Gerrald. Erected by the Friends of Parliamentary Reform in 1844. Muir was a successful advocate who favoured a Scottish Republic and had a reputation for defending the poor. Palmer was born in Bedfordshire and educated at Eton and Cambridge before becoming a religious preacher. Skiving was a farmer’s son from outside Edinburgh and Margarot was born in Devon and was in France when the Revolution broke out in 1789. Gerrald was born in the West Indies and became a lawyer in the United States before moving to Bath in England. All five martyrs supported the Friends of the People in their campaign for parliamentary reform and universal suffrage at a time when only 4,500 land owners had voting rights out of a Scottish population of 1.6m. The ruling Tory cabal were so alarmed by the martyrs’ campaign that they were arrested and charged with sedition. They were found guilty and transported to Botany Bay. Only Margarot returned home alive.

In 1797, the Militia Act was passed to raise a conscripted army of 6,000 based on lists of 19 to 23 year-old males compiled by local schoolmasters. Those on the lists had the option of paying a substitute to take their place. This ensured that the rich could dodge conscription while the rest were too poor to do so. This provoked widespread anger and over 40 riots erupted throughout Scotland. Bringing troops from England to quell the disorder didn’t help matters, but the uprisings eventually petered out. 80 ringleaders later faced trial on charges ranging from mobbing and rioting to sedition. However, the majority were acquitted or simply ‘disappeared’.

There are also 1820 monuments at Woodside Cemetery, Paisley and at Bank Street, Greenock. Events to mark the bicentenary of 1820 had to be postponed this year due to Covid-19. Hopefully these can go ahead next year and details should be available at www.the1820society.com

Where and what now for the Scottish left?