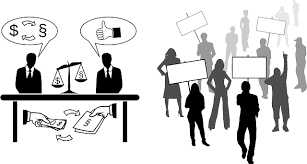 The Scottish Government recently published its draft bill to regulate lobbying at Holyrood. While this marks a potentially significant development in terms of promoting greater accountability and transparency in decision-making, the proposals have been criticized by transparency campaigners and some lobbyists.

The issue of lobbying regulation has been on the agenda at Holyrood since Neil Findlay proposed a private members bill to increase transparency around lobbying in 2012. Since then, the scope and ambition of the planned lobbying register has been altered significantly. To understand this outcome, it’s necessary to compare Findlay’s bill with the current proposals in order to highlight the processes reshaping Findlay’s proposed lobbying register template.

Consultation is required to advance a private members bill at Holyrood. After seeking submissions from interested parties, the essence of the scheme emerged. Findlay proposed a Scottish Register of Lobbyists should strike a balance between straightforward compliance and ensuring that the information disclosed would make transparent who is lobbying, what issues and regulations they are lobbying on, who is being lobbied and the financial resources devoted to influencing political decision making. The overall purpose was to help inform judgements about whether lobbyists had influenced decision makers, and how.

Findlay’s proposals attracted sufficient cross-parliamentary support to go forward in 2013, and at this point the Scottish Government exercised its prerogative to take over the bill and bring it forward as government business. Findlay deserves credit for taking the initiative and generating sufficient parliamentary consensus to progress the debate.

During this phase the lines of debate were drawn, remaining largely unchanged since. In the pro-transparency camp, the argument is a lobbying register would enhance equality of parliamentary access for organisations of all sizes and resource levels as increased transparency would improve accountability, address fears about undue influence and transparency would be the best guarantor to prevent Westminster-type of lobbying scandals emerging in Scotland.

The skeptics argue regulation creates a barrier to participation (particularly for small groups), dismissing registration as a disproportionate response for Scottish polity which has not been tainted by the lobbying scandals. Other arguments were the onus for lobbying transparency should be on MSPs and the lobbied, and problems defining lobbying and demarcating thresholds for disclosure were likely to produce an unfair system that would put individuals and groups off approaching Parliament (without ever being substantiated).

Holyrood’s Standards, Procedures and Public Appointments (SPPA) Committee was charged with examining the case for a register, instituting a consultation. This allowed a further examination of the merits of a register, and some of the claims about the desirability and practicality of lobbying disclosure were carefully interrogated. The SPPA inquiry concluded with a report to the Scottish Government earlier this year, recommending introducing a register to ‘detail lobbying activity as opposed to simply being a list of names of lobbyists. The register should detail who is lobbying, how and why’.

The SPPA also recommended an open and accessible digital register to capture consultants and in-house lobbyists (including charities) in order to target ‘organisations who have significant contact with MSPs or who invest significant amounts of money into lobbying MSPs on behalf of others’. However, the SPPA shied away from financial disclosure and lobbying directed at civil servants that were core elements of Findlay’s bill.

The Scottish Government published a further consultation in May 2015. While key issues like financial disclosure and lobbying scope remained off the agenda, the question of exemptions for certain types of lobbyists was re-opened and critically reframed the entire purpose of the legislation as one of ‘heightening the transparency of those who are directly engaging with MSPs and Ministers’ despite direct engagement with MSPs and ministers being only a small part of the lobbying universe with lobbying campaigns routinely including civil servants, special advisors, online and media relations as well as political monitoring and stakeholder engagement. Moreover, disclosure of financial resources supporting lobbying, and communications with officials, advisors and regulators has been omitted.

It remains to be seen if there is appetite to revise the Government’s proposals. Yet questions about the sustainability and impact of the draft bill cannot be easily dismissed. Can these proposals really aid public understanding of decision-making? Will they produce an accurate picture of how influence is brought to bear? Unless the answers to these questions are an unambiguous ‘yes’ then it is important that the Parliament properly exercises its scrutiny function over the coming months.