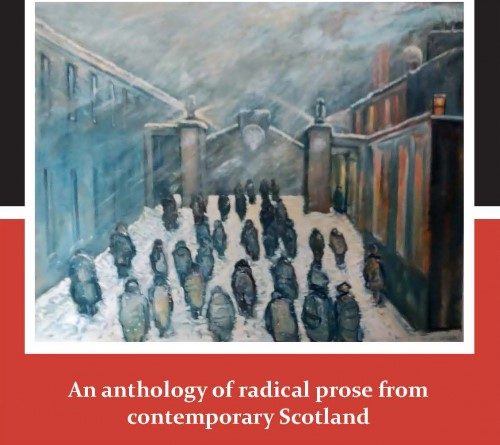 Ghosts of the Early Morning Shift is an anthology of radical writing which explores historical and contemporary Scotland, combining memoirs of grassroots activists and contemporary fiction. The book is divided into two sections. The first section, entitled ‘Memoirs’, explores historical and contemporary activists and their contributions to social justice both in Scotland and internationally. The second section, entitled ‘Flash Fiction’, employs the short story form to examine the working-class struggles and consciousness.

The first section has contributions from a wide variety of activists from food bank to the Muslim Women’s Association. It also moves from contemporary activism to historical struggles of lesser-known women activists, such as Helen Crawfurd, Scottish representative of the International Committee of Women for Permanent Peace in 1919.

What is remarkable about these memoirs is their ability to remind us of the struggles of ordinary working-class people who fought unequal battles against oppression and yet were able to help shape a better, more socially just society. Bill McKeraghan, a food bank volunteer in Edinburgh, expressed his humane motivation with devastating simplicity stating that he was ‘motivated simply to try and lessen the misery in our midst’. His activism is also imbued with an historical perspective. Having left Scotland before the dawn of Thatcherism, he returned to a more divided and impoverished country. He observed that change can also move backward as well as forward.

The memoirs recount iconic class struggles from the rent strikes to the miners’ strike, by way of Clydeside. Whilst these seminal moments, deserve their place in labour history, what is more interesting are memoirs of the lesser-known figures and events. In particular the role of unsung women heroines has resonance. Liz Rae Shaw recounts the role Mhairi Mhor nan Orain played in the Skye Land League fighting for social justice against the landed aristocracy who robbed crofters of their homes and livelihoods. Also, it is a damning indictment of how rural Scots were treated by a nineteenth-century legal system where class dictated judicial decisions. Kate Armstrong in her work on Mary Brooksbank continues the theme of the prominent role working-class women played in the fight for social justice in Dundee. Armstrong skilfully synthesises the symbiotic relationship between labour struggles and working-class cultural life, depicting Brooksbank, as a rounded individual who worked in the Jute mills but was also a folksinger. These short pen portraits of working-class women remind us that our forebearers were multi-dimensional and that the fight for social justice also took place outside male-dominated industrial Scotland.

The theme of the role that culture played in working class identity is continued by Alistair Findlay. He pays homage to Hugh MacDiarmid’s role in the Scottish literary renaissance but also contextualises MacDiarmid’s contribution within the wider context of working-class intellectual culture that promoted critical thinking and laid the foundations for the attack on Kailyard culture. Where the book falls short is its inclusion of contemporary depiction Glaswegian slang by Sophie Park in ‘A Love Letter to Glasgow’. Her depiction of sharing the virtues of the Glasgow dialect with her Oxford don is a piece of cultural appropriation in its crassest form. However, its unintended comedy value overrides its offensiveness.

The memoirs of unsung heroes stand shoulder-to-shoulder with one of Scotland’s iconic leaders – Jimmy Reid. David Betteridge offers concise analysis of the strength of union organisation. Above all it reminds us of the power of oratory. Reid was a great speaker who could appeal to his immediate audience and wider society to articulate working class discipline and courage to fight for labour dignity. For this piece alone, this anthology is worth having on your bookshelf.

The book’s second half contains twenty vignettes about the lives of working people. Geraldine Gould’s Smell of Coffee is a portrait of a middle-aged educated working-class woman reflecting on her university days over a cup of coffee in her old university haunt. The character is caught between the worlds of her origins and her university experience. She poignantly describes how the character did not have the confidence to fully enjoy her intellect and the beauty of her youth. This is a story that many first-generation graduates can readily identify with.

Continuing with the theme of working-class life, Andrew O’Hagan’s Cipher is a stream of consciousness piece written in Scot’s dialect. It depicts the character’s dead father’s literary legacy of his book collection whilst observing the drudgery of his life. The anthology also engages in class injustice beyond Scotland. Leela Soma’s Locked In provides a powerful description of British imperialism in India as seen through the eyes of the colonised. It is a searing portrait of how Indians were economically and sexually exploited by their colonial masters. In order to be saved from destitution, the female character in the story has to be subjected to the missionary imperialism of Christian charity.

This anthology is an engaging read portraying the extraordinary life of working-class people and their struggles for social justice. The book skilfully blends memoir and fiction to portray a culturally rich and diverse working-class experience both within Scotland and internationally.

Dr David McKinstry is a Poet and History Teacher at Holyrood Secondary School in Glasgow.