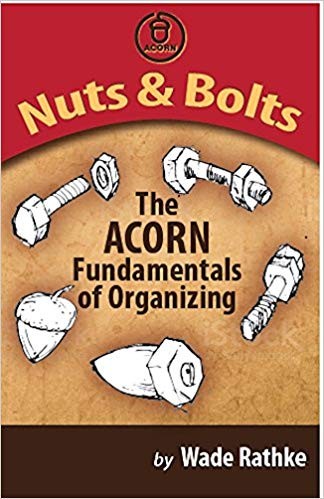 Nuts and Bolts is a compendium of tools, examples from the field, advice and tips for building power and effective mass organisation in the community, workplaces, politics and the media. Rathke shares almost 50 years of organising experience with a look at the ‘nuts and bolts’ of how ACORN was organised and able to build a mass membership and achieve major victories in the US, Canada, Britain and around the world in plain language that can inform organisers, leaders, activists and policy makers about how to change and build power. Written in a strident but inspiring tone with tongue-in- cheek reminders, the book is dedicated to ‘all great leaders, members and organisers that have worked in these same vineyards to empower people and force their voice to be heard’. After all, community organising explicitly seeks to build the power base of the poor so they can affect and change the public policies and private market forces that create and sustain social and economic inequality.

Community organising is fundamentally about oppression, inequality and the struggle for social change that come from them. It begins with the assumption that small and great injustices are typically the results of power imbalances and those most hurt by the system are those who are the most powerless to act on the system. Organising does two central things to seek to rectify the problem of power imbalance. First, it builds a permanent base of people power so the dominant financial and institutional power can be challenged and held accountable to values of greater social, environmental and economic justice. Second, it transforms individuals and communities, making them mutually respectful co-creators of public life rather than passive objects of decisions by others. In this regard, ACORN’s community organising model posits the organiser as a key component in developing an un-organised and apathetic community into a viable organization. There are a vast numbers of roles an organiser plays in ACORN’s’ model. The most simple is that he/she brings in members and keep them there.

The acronym ACORN stands for Association of Community Organisation for Reform Now. It started life as the Arkansas Community Organization for Reform Now with its roots in the community organising teachings of Saul Alinsky the founding father of this approach. Any discussion of the history and current practice of community organising must feature Alinksy. He organised the Back of the Yards Neighbourhood Council that was made famous In Upton Sinclair’s The Jungle. Alinsky wrote two books that are immensely popular and in constant use as tools in the training for community organisers and leaders, Reveille for Radicals and Rules for Radicals. If the Prince was written by Machiavelli for the haves on how to hold power, Rules for Radicals was written for the have nots, on how to take it away.

Alinsky’s work from 1938 until his death in 1972 was unique and had a powerful multi -dimensional influence on the community organising. It has influenced every generation of community organisers since. His inspired approach to community organising was a catalyst in the creation of many organizations while he was still alive and he spearheaded efforts to modify organising methods and strategies for maximum effectiveness.

ACORN’s model also emphasizes that an organisation must be permanent with multi-issued concerns achieved through multi-tactics, direct action, and membership participation in policy, financing, and achievement of group goals and community improvements. It unites communities for social change and in contrast to traditional unions which organise around workplace interests, ACORN unionises on social and community issues. When Rathke visited Scotland for the first time in May 2013, he was invited and hosted by Edinburgh Private Tenants Action Group. In May 2014 ACORN UK was formed by 100 tenants in Bristol. Supported by 3 staff organisers they voted to organise for more security, better quality and more affordable housing. ACORN has combined online organising via social media with its traditional door-knocking approach to organise transient private sector tenants. The group combined local direct action ‘member defence’ actions with larger regional and national campaigns. For example, ACORN runs #Renters Rising, a movement to build a national tenants’ union, fighting for renters right against rogue landlords. Last year, it celebrated a huge win for people power, beating international banker Santander. Buried deep in Santander’s buy-to-let mortgages was a hidden clause that forced landlords to raise rents to the maximum. They also worked alongside Generation Rent to register and mobilise the renters vote in the 2016 general election. Living Rent is Scotland’s tenants union which is also affiliated to ACORN International has branches in Glasgow and Edinburgh. The organisation recognises the necessity of direct action in creating change, not just in supporting a fairer society but fighting for it.

Nuts and Bolts is hardly a template but it offers the basic tools and principles to organising. They must be seen as guidelines and suggestions to be evaluated and adapted to meet your needs and particular situation. Ultimately, only hard work and dedication to organising will make change happen. Justice is just us.

Tony Adams is a lecturer and EIS equality rep at City of Glasgow College. He has published in the Asian Times, Caribbean Times, Morning Star and Weekly Journal.