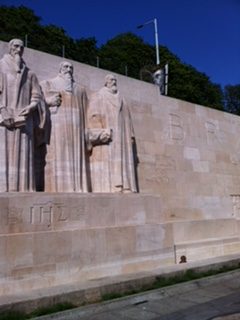 This is a set of two CDs, not the book by James Hogg that was published anonymously in 1824 and best read in the Oxford World Classics edition. Not having read the novel is no barrier to enjoying this commentary and Douglas Gifford explicates the plot and the characters without assuming listeners are familiar with the story. Interestingly, the commentary begins with a full-blooded reading of Robert Burns’ poem ‘Holy Willie’s Prayer’ by John Sheldon. It is seen as a representation of the Calvinist bigotry and belief in predestination that goes a long way to understanding the characterisation of Robert in Hogg’s novel. The self-righteous narrator of the poem is able to justify his lechery because he is a ‘chosen one’.

Robert is brought up by his adoptive father, the Reverend Wringhim (like characters in Dickens, his name is a clue to his nature), whose religiosity does not preclude the likelihood that he is Robert’s real father. Brainwashed by Wringhim, Robert becomes ‘a prisoner in a Calvinist jail’ and this is the subject matter of the second track on the first CD. The final track on this side is all about the enigmatic Gil-Martin who can be seen as the devil in one interpretation of the novel. Such a supernatural reading is one of two interpretations considered in the second CD, placing it within a context of Borders legends and folk tales, a world of devils and fairies, spiritual pride and demonic possession. Alternatively, a psychological reading allows for an understanding of Robert as a schizophrenic individual, tormented by hallucinations.

The Justified Sinner becomes ‘a book of riddles’ in the way these apparently conflicting interpretations co-exist within the novel, the ambiguity being its strength. The final track looks at Hogg’s other writings and the snobbery of Edinburgh’s arbiters of literary taste that dismissed Hogg because he wasn’t a ‘gentleman’. In truth, convincingly argues Gifford, he ‘has as much raw talent as Walter Scott’ – one of those who looked down on him and helped ensure his talent went unrecognised. The Justified Sinner, for Douglas, is ‘one of the greatest novels in Scottish – and in English – literature and his commentary goes a long way in validating the claim.

Green revolt on our streets