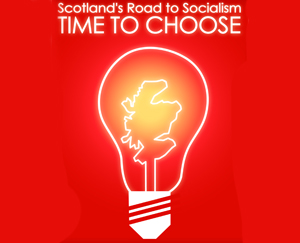 Scotland ‘s Road to Socialism Time to Choose is an interesting and thoughtful contribution to the current debate on what socialists should be arguing for in the run up to the independence referendum. It is series of articles by authors on different sides of the independence debate who look at where we are. The editor Gregor Gall had posed some questions to each writer in the opening chapter; however in reality each person sets the scene from their own experience and given the space available to them can only explore aspects of the issues they were asked to.

There are contributions from Labour Party members, Green Party members , SNP members, the Communist Party of Scotland, the Scottish Socialist Party and as well as a number of full time trade union officials and politicians and other groups and activists. It can’t include the whole spectrum of those all involved in these debates but captures a fair few.

Some, very much in the pro independence camp, argue as Bill Kidd puts it “If there isn’t a Scottish road to socialism, there isn’t one at all”. Others such as Richard Leonard argue that the ownership of the Scottish economy does not lie in Scotland but “still predominately lies at a UK level” and that “socialism cannot be secured in Scotland on its own”.

The common ground perhaps is a recognition of the hugely unequal society in which we live and there are lots of very useful well researched facts. Jim and Margaret Cuthbert highlight how difficult it is to track the actual owners of large parts of Scotland’s wealth. Colin Fox looks at housing, fuel poverty and the considerable falls in living standards. He makes the case for full employment and progressive taxation and considers how to respond to austerity. Others focus on other aspects of the gap between rich and poor and the failure of the current political structures to seek to address these inequalities.

Cat Boyd and James Foley and Neil Findlay and Tommy Kane quote from the 2006 book Grasping the Thistle co-authored by the Education Secretary Mike Russell where he argues for scraping universal benefits and big public sector cuts. Russell has now renounced those views but the neoliberal influences within the SNP are explored by those both in the ‘yes’ and ‘no’ camps. Jim and Margaret Cuthbert argue from a pro-independence viewpoint that the vision of independence put forward by the SNP’s leadership means that even if they won the yes vote they would only have “ a mandate to negotiate for the establishment of something far short of any meaningful concept of independence”. John McAllion also attacks the SNP leadership who have “set out to reassure worried voters that independence will not change anything much”. But also writes of the “banal” politics of Better Together on the Olympics and scaremongering over access to programmes such as EastEnders.

Those who will vote against independence look at what if any further devolution might take place. For example Pauline Bryan says that neither Westminster nor Holyrood “acknowledges the conflict of interest between democracy and the power of corporations”. She advocates further devolution of borrowing powers, the power to take land and enterprises into public control and points to the promotion by Welsh Labour of the social ownership of the utilities as something we should be looking at.

All in all it is quite a mix of views so if you want a taste of what is being discussed in the lead up to the referendum this is not a bad place to start.

Katy Clark is Labour MP for North Ayrshire and Arran. SNP MSP Jamie Hepburn will review the book in the next issue

As Bigelow is to torture, so Bowd is to fascism – in Scotland anyway. It must be very hard for a film director or writer to have their work so misread that a rational debate about the subject of the work can only take place, with some people at least, if and when they become convinced that they have indeed misread it. Bigelow directs a movie that demonstrates the dubious value of torture in gathering intelligence and stands accused in some quarters of “supporting terrorism”. Such things happen all the time.

But for Bowd it must all the more galling that the misreading started before his book was published. Invited by Scotland on Sunday to preview it, Bowd suggested, what his book convincingly demonstrates, that some Scottish nationalists in the 1930s and 1940s, flirted with fascism. In the following edition of the paper, Bowd himself became news when he was threatened with physical harm for allegedly alleging that Scottish nationalism is fascist. Bowd was consequently by the police “advised to take sensible precautions”.

In stirring up some of the ranker sediments of the nationalist pond, Bowd performs a valuable service in exposing a tendency in Scottish politics across party lines, to have a romantic view of the Scottish people as inherently and historically peace-loving democrats with a natural bent for socialism, unrivalled in the UK and possibly the world, as proved by the universal popularity of Burns and his suppers. Such fantasies are quickly dispelled by Bowd’s analysis of the relative weakness of fascism in Scotland: the space was already occupied by organised religious bigotry, green and orange. Sometimes the resultant polemics could reach the levels of black comedy. The Orange sectarians who controlled parts of Edinburgh in the 1930s opposed Hitler because he was a papist. as if that could ever be the most important thing about him.

I am not sure that the prominence that Bowd gives to the flight of Rudolf Hess is warranted. Bowd seems to suggest that Hess’ action was based on a sober assessment of his possible reception in Scotland, whereas the actual course of events serves to show that Hitler’s declaration of war had rapidly disillusioned most of those previously sympathetic to nazism.

It comes as no surprise to learn that some of the more authoritarian figures in the nationalist camp were attracted to fascism, but Bowd shows that others such as Hugh McDiarmid generally considered to be left-leaning had favourable things to say not just in 1923, when it was perhaps forgivable, but later when the real nature of fascism was more widely understood.

Bowd does not go into the reasons for this. It might be argued that the policy on national oppression developed by Stalin, with a lot of guidance from Lenin, which argued that oppressed nationalities were justified in accepting military aid from the enemies of the oppressor. So Sinn Fein were within their rights to seek assistance from the Kaiser. But this never implied political support for German imperialism, in contrast to some of these nationalists who not only sought German aid but also thought that Scotland should adopt fascist policies.

Very occasionally, Bowd reports an event without explaining its full significance, perhaps assuming more knowledge in the reader than might be expected:

In 1962, at the Edinburgh Writers’ Festival, Hugh McDiarmid had not hesitated to brand the Scottish situationist Alexander Trocchi as ‘cosmopolitan scum’

The contemporary reader might scratch his or her head confronted with such an episode. Why should the epithet cosmopolitan cause offence? The answer lies in the history of anti-semitism. In the 19th century a French writer called Tremaux put forward the thesis that ‘soil’ influenced evolution. It seems that Engels discouraged Marx’s initial enthusiasm for this writer even though if by ‘soil’ we understand habitat or environment, Tremaux’s ideas seem correct. But that is by the way, in the event it was the theorists of French racism such as Drumont who took up this idea most vociferously at the time of the Dreyfus affair. Their argument was that because of the diaspora, Jews, unlike the French, had no relation to the ‘soil’, and thus they could never become French – they were ‘cosmopolitan’. Shamefully, this insult was adopted by the Stalinists at the time of the so-called doctors’ plot as a way of playing the anti-Semitic card whilst avoiding the embarrassment of openly avowing it.

The fact that Bowd has exposed some of the murkier aspects of Scotland’s political history may be unpalatable to some, enraging a few, but denunciation in the absence of a reasoned refutation convinces only the prejudiced.