The maverick Labour MP Paul Flynn has been around Welsh politics since being elected as a councillor in the early 1970’s. In his foreword, he describes “Clear Red Water” as a “delight”, yet admits to being shamed by the extent to which this polemic on Welsh devolution and socialist politics has exposed his own lack of awareness about the real achievements of the Welsh Assembly and Government since 1999.

His ignorance will be multiplied many times over from the perspective of most Scottish readers. We may be familiar with Welsh politicians like Lloyd George, Nye Bevan and Neil Kinnock who, for better or worse, have all made an impact on the British political stage. But the politics of Wales itself remain a mystery to most of us. “Clear Red Water” reminds us of the high cost of our own ignorance.

Scotland’s arguments over home rule have been dominated by the mainstream parties fighting with each other over Royal Commissions, Scotland’s oil, funding formulas, slippery slopes, economic and taxation powers and referendums. Yet, not one of them has focussed on the role of self government in building a socialist alternative to the free market policies that all of them share across their nationalist – unionist divide.

Nick Davies and Darren Williams’ case for devolution as the road to a democratic and socialist Wales is therefore both a timely and welcome breath of fresh air compared to the stale constitutional stand-off between Scotland’s main nationalist and unionist parties. Where Salmond and Gray argue over the relative merits of independence and devolution as the means of saving Scottish capitalism, Davis and Williams insist that the real significance of self government is the opportunity it presents to build a specifically Welsh socialist project.

Described in these terms, WLG can hardly claim to be a specifically socialist project and the authors are quick to acknowledge many of the views expressed in the book as “primarily” their own and not “necessarily” those of the network. It appears that the first rule of working for change inside today’s Labour party is to remember that too much socialism can frighten off a membership used to its party profiting electorally from distancing itself from any taint of socialism.

Yet, socialists with an interest in the national question will find this an entertaining and illuminating read. The title refers to a speech made in Swansea by Rhodri Morgan, the Welsh First Minister, six months before the Assembly elections of 2003. In the speech he set out the “clear red water” that divided Welsh Labour from Westminster Labour and, with that phrase, provided the accepted shorthand for a distinctive political agenda for devolved Wales. “Unashamedly” a socialist, Morgan argued that the Welsh party preferred the “powerful glue of social solidarity” to the limits of Westminster’s market-based policies.

Where New Labour targeted the poor with the means test, Welsh Labour put its faith in universal free public services. Where Westminster government opened up public services to market forces, Welsh government renounced PFI’s and foundation hospitals and schools. Where Mandelson moralised about the values of free markets and equality of opportunity, Morgan preached the socialist doctrine of government as a force for good guaranteeing equality of outcome and social justice.

However, the authors are also candid about the severe limits of Welsh devolution with its lack of legislative competence or “primary powers”. An All Wales Convention paving the way towards greater democratic devolution is central to their proposals. Unsurprisingly, the idea of transferring political power from London to Cardiff has been met with relentless hostility from Peter Hain and the majority of Welsh Labour MPs at Westminster whom the authors variously and entertainingly dismiss as “devolution sceptics” or “drag anchors on devolution”.

They are equally scathing on their party’s bureaucrats dismissed as the “New Labour bunker and its Cardiff satellite”. The botched attempt by the bunker, backed by the leadership of the big British unions, to impose the Blairite Alun Michael as Labour leader in the Assembly is denounced as bringing the party in Wales into disrepute and demoralising and embittering its membership. The way forward for progressive politics they conclude is to ensure that those policies are made in Wales.

Given the current row over Diageo’s threat to sack hundreds of workers in Kilmarnock, Scottish readers will be particularly interested in the authors take on how governments should stand up to multinationals threatening to downsize or disinvest. Debunking the neoliberal argument that governments are powerless in the face of globalisation, they slate governments like Blair and Brown’s New Labour administrations for taking political decisions that created economic environments in which corporate tyranny has flourished. Different decisions would have created a different environment in which public ownership becomes a logical and feasible choice. In democracies, they argue, people should control capital, rather than the other way around.

The authors also defend the current One Wales coalition agreement between Labour and Plaid Cymru against the attacks of Labour party patriots who denounce any dealing with the nationalist enemy and argue for “my party right or wrong”. They are generous in their assessment of Plaid Cymru as a progressive party with a strong socialist wing, a description that few neutral observers would apply to the Labour party. They also welcome the Greens as a natural partner in the broad cross-party alliance that they identify as necessary for delivering progressive change in Wales.

However, their Labourist understanding of the wider socialist Left leaves much to be desired. Socialists in Left parties are summarily dismissed as lacking popular support and as being delusional about their “vanguard” role. Their place in the authors’ progressive alliance is made conditional on their acceptance of the leadership role of those on the centre left who can “command mass support”. The cynic might remind the authors that self proclaimed centre left leaders such as Blair and Brown used their command of mass support as justification for their ditching of socialist principles.

“Clear Red Water”, however, provides both a succinct account of Welsh devolution and argues the case for reuniting the historic traditions of self-government and socialism as the basis for building a more progressive and equal country. It is written from the perspective of Labour Party activists who have resisted the New Labour revolution and who want their party back. Therein is its major weakness. Back to the future never has and never will deliver socialist change. But with the prospect of referendums looming in Scotland and Wales sometime in 2011, this remains a good and worthwhile read for socialists in both countries.

FEELBAD BRITAIN: How to Make it Better 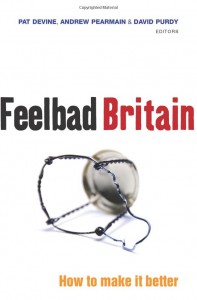 “A project in search of a party” might be the best summary of this essay collection. It covers familiar aspirations on the left/green spectrum but stumbles on the problematic question of how they can be delivered.

Feelbad Britain could more accurately be titled Feelbad England. Some of the contributions are explicitly about developments in English education and health services but even in the more general analysis of what happened to the left over the past forty years, the experience of Scotland, Wales and Northern Ireland receives only passing reference. This is not just a girn; the intellectual perspective of the authors is Gramscian and exploring the differences in political culture within the UK and the extent to which this has produced different socio-economic outcomes should have been a core not a peripheral question. There are clearly differences in political culture. The response to Thatcherism by both the middle and working class in Scotland was different from much of England. The political use of the national dimension in England, Scotland and Wales and the communal dimension in Northern Ireland has provided very relevant material on how differing ideologies have promoted change. How significant these changes have been is a valid area for debate that has significance well beyond the devolved areas.

The principal theme in the book is well-developed but familiar. The editors start with a critique of the left in the 1970s for its failure to develop a vision beyond militant labourism with:

“its ambivalent attitude to democracy, its workerism, its economism and its failure to appreciate the role of moral and intellectual leadership…”