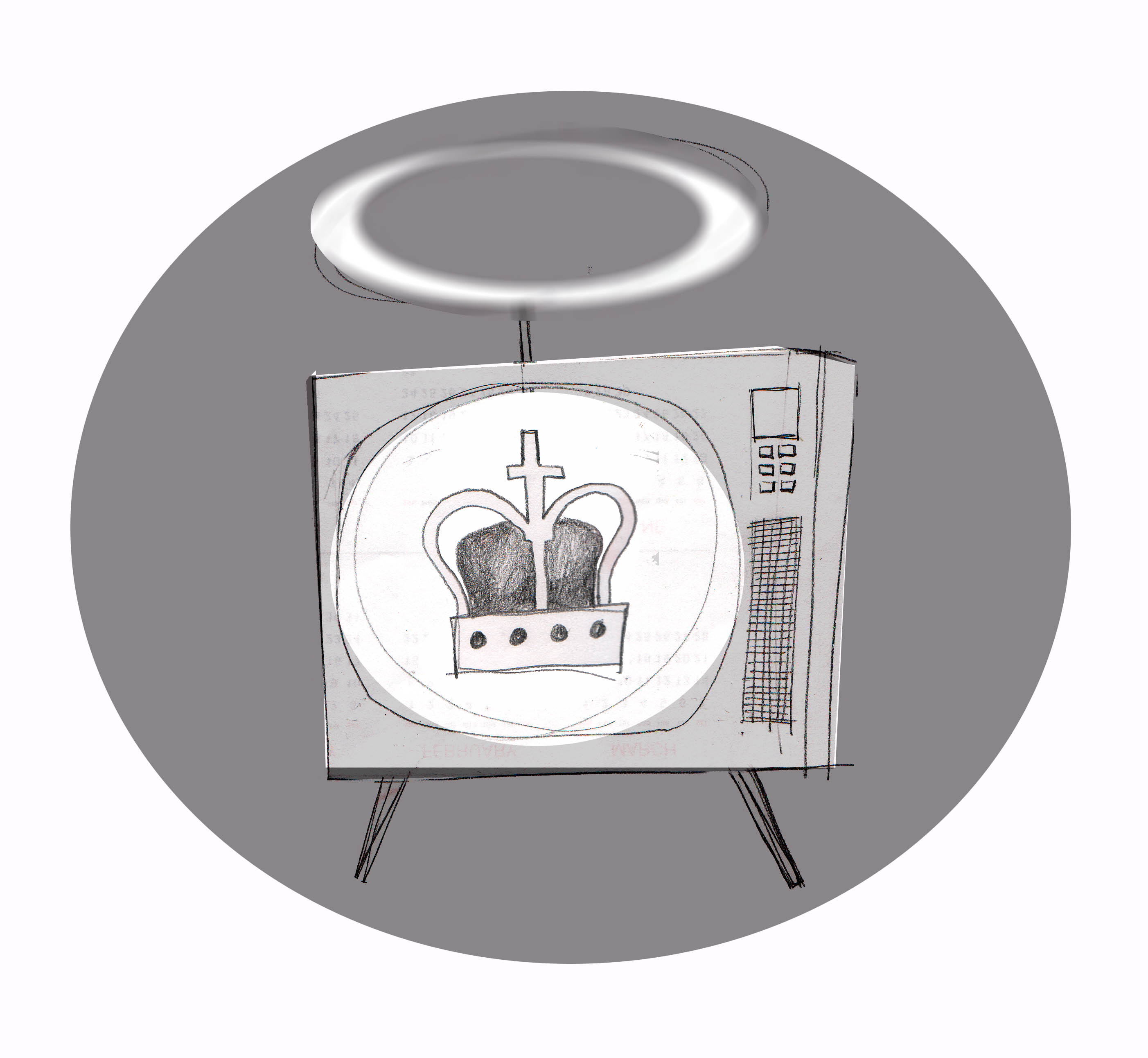 Every so often I try to answer questions from overseas journalists about the nature of the UK’s curious relationship with its monarchy. Outside observers feel that it must require a special explanation. This is because British society strikes many of them as odd, putting one in mind of a quip of Jean Baudrillard’s, when (to paraphrase) he noted that 500 years after the discovery of America ‘we have yet to discover England’. 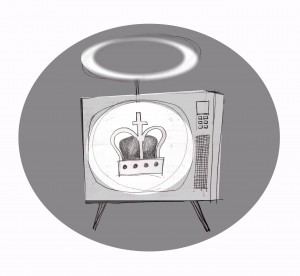 Attempting to comprehend a society where front page news is made by the ‘relaxed’ demeanor of the Duchess of Cambridge in her first public engagement, and in which public broadcasters encourage compliance toward rituals of subjecthood (lining the streets for weddings and funerals, organising garden parties) is bound to pose deep questions about statehood and collective identity.  Historians, prominently among them Tom Nairn and Perry Anderson, have furnished a theoretical apparatus with which to account for an apparent degree of refusal within British society, also perhaps its attendant psyche, of the condition of modernity. There are some interesting contrasts between the manner in which European nations perform their monarchies, including in their media, and the very different British case, in which the monarchy seems invariably to represent the past, along with veneration of ‘tradition’.

Leaving these larger questions in the background, there are specific aspects  of the media representation of monarchy inviting separate definition. First there is a matter of categorical difference between monarchy as a topic, and the royal families who provide human interest stories in such abundance.

The constitutional aspects of monarchy are little-visited by the British media. This, in a country in which attempts to define British citizenship to incomers reveal how little it has ever been defined, is not surprising. Somewhere in a seldom-articulated substratum of national consciousness lies the notion that the monarchy as institution exercises a protective democratic function. Perhaps the mass of its accumulated tradition is believed to produce a social inertia which, though resisting change, somehow does this in a good way, preventing disorder. The lack of interest within the media here in any real scrutiny of monarchy in its constitutional operation is notable, not least by comparison with practice elsewhere. That this neglect performs an important ideological operation by omission is self-evident.

What we get in the main is a continuous human interest narrative (royal character and behaviour) and much visual spectacle, for example through the rituals of royal visits, anniversaries and pageants, marriages and deaths, also matters such as royal fashion and style. The focus of interest is very extended in the UK, so that co-opted or semi-attached members of the Family (Mike Tindall, Pippa Middleton) become available as an ever-replenished media resource. In this way, something is always happening, there is always a royal story, even when it is only that the newest adoptee by marriage is ‘relaxed’, or might be losing weight. And should Pippa oblige with a mock gun incident in Paris then much else can be wiped off the front page to give it priority.

There is a very specific question about displacement. There are only so many stories in a broadcast news bulletin or a newspaper. Of necessity most news is news we don’t get, since space and attention are finite. Royal stories push other stories out. In extreme cases (royal weddings and funerals) only the advent of both the internet and satellite/cable television have provided potential release from the news blackout which once descended on the UK when royal events were deemed sufficiently major to block all else from sight.

The lack of interest within the media here in any real scrutiny of monarchy is notable. That this neglect performs an important ideological operation by omission is self-evident.

Generally the need to prioritize news stories produces a news hierarchy which, though very variable (say, from the Sun to the Independent) can, at the quality end of the media, usually function within some social consensus about what is important. Royal stories, on the other hand, invade this consensus with sudden insouciance, so that serious items on the Arab Spring or eurozone meltdown share valuable space with concoctions about Prince Harry in a uniform, or Camilla helping a charity (good of her though it is).

Another effect apart from displacing news which may go unreported is of further magnification of the focus on human interest which already challenges hard news almost everywhere. Few royal stories have any hard news element. In fact there will seldom be any justification for royal stories other than their nature as royal stories.

As to ‘balance’, the largely supportive intention of incorporating Royal ‘news’ precludes balance entirely. For sure, there are times when Andrew, say, or Camilla, will fall foul of the press, in the latter’s case once enduring a period of very nasty harassment. Even Diana was subject to criticism in her latter days. Generally, journalists and editors quite like to have a misfiring royal in order to produce character contrasts and narrative variety. But the recuperative powers of royalty in media accounts is infinite, not least since core characters (the Queen, Princess Anne) usually serve as exemplars of public service.

In fact, rather than observing criteria for hard news or balance, royal media accounts are most often indistinguishable from public relations work on behalf of the palace(s). Worse, this tendency slides some way into the practice of misrepresentation, in other words, of downright bad journalism and editorial standards. Let the so-called ‘outpouring of grief’ at the death of Diana stand for bucketloads of similar exaggeration, all supportive in ultimate effect of the monarchic institution (some editors dispute this). There was no evidence of ‘grief’ in 1997 at this unfortunate event. Upset, sadness, by all means, but even an empirical investigation at the time which carefully searched for ‘grief’ amongst many interviewees found none. Yet the absence of journalistic interrogation of this phrase has led to the consolidation of a historical factoid, now re-used as a milestone in recording British emotional habits.

However there is an even more serious concern about the nature and effect of both the quantity and quality of royal media coverage. The United Kingdom is not only deeply stratified socio-economically, with widening inequalities, but produces some appalling social indicators by comparison with other developed countries. Its present coalition government is the least representative imaginable. Arguments about the problematic nature of the UK as a modern state are as pressing now as ever.

It is in this context that the editorial embrace extended to the royal family is especially unprepossessing. There is a cumulative effect of excessive royal coverage which deflects concern with alarming social issues, replaces hard news with the very softest of news, issues positive messages about the organisation of a society which is dysfunctional in many aspects, and valorizes stasis and tradition over change and progress. That this is not a matter which appears to worry, in particular, public broadcasters, is a matter of concern. The scant evidence that exists suggests that broadcasters take a strong stance when criticised on these grounds.

Can we explain all this, at least in term of media behaviour? Will it change? The old argument that the public gets what it wants has been substantially undermined by evidence from the blogosphere and elsewhere on the internet that actually many readers, viewers and listeners baulk at the extent, and the unbalanced nature, of media coverage of the royal family. Readership demographics of newspapers may produce cases where older, conservative readerships find these royal obsessions more acceptable. One or two newspapers, too, do resist the call of the palace. But it is quite likely that editorial judgement is often not synchronized with public opinion.

There are some specifically very appealing aspects of royal coverage from a media point of view. First, it’s easy. Breaking real stories is hard but picture-led stories about Kate and Pippa, not least those posed, fill space with little effort. This is not to belittle the efforts of hard-working specialised royal correspondents plying their mysterious trade, but a lot of pictorial royal news is really a sort of flower arranging. Also, from a TV standpoint, royal spectacle is controllable, predictable, and owned by large broadcasters, unlike the news which now breaks via social media and citizen journalists. iPhones don’t compete with privileged TV shots from high up in Westminster Abbey. Likewise, royal correspondents can break stories which only ‘palace insiders’ receive. Many journalists are now conscious of following news broken by non-professionals, a product mostly of technological change. Additionally, there is an editorial perception that people are, at the very least, always mildly interested in (especially) photographs or film of the royals (as perhaps with meerkats or giant pandas).

And here we get close to a truth, which is that probably people are very mildly interested in the royal family, but that their interest and approval, even among recorded approvers, are both marginal. If the British media reported the royal family less, public interest would wane. If the British media didn’t report them at all, one wonders about whether beyond the specialiSed audiences of Hello! or perhaps the Daily Express, there would be much protest. Weddings and funerals by all means, of course, but it’s quite possible that a fraction of present news levels would be as acceptable as the present overload.

One agent for change, however, has already been mentioned, and it is the new technologies which now come to the fore. The transition of media contents from traditional broadcast  and press platforms to social media and the internet produces many questions for debate. One of them concerns migratory effects on the operation of ideology. This is not to repeat an old claim about the medium being the message, just to acknowledge the specific effects of different media. The favourable treatment accorded to the monarchy and its family members is a product of press and broadcasting institutions which are ceding ground to other voices. As yet we should not exaggerate this effect since most people still get their information from long-established media. In a decade or so we may know more about how royalty in the UK can adapt to change in its main life support.