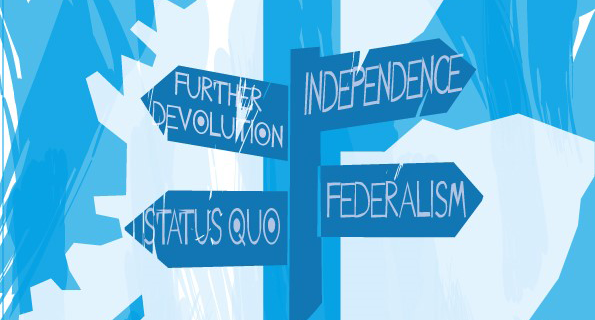 Somewhere along the way, debate on how Scotland should be governed splintered and narrowed. Perhaps, the roots of the splintering lay in separate Royal Commissions on local government and the constitution in the 1960s. There was certainly overlap in the deliberations of the Wheatley (local government) and Kilbrandon (constitution) Commissions but they largely talked past each other. Local government was reformed in the 1970s and again in the 1990s with little attention to the implications for wider constitutional reform. Many local councillors felt that the new system needed to bed down in the 1970s and worried that a Scottish Assembly would usurp local government powers and resources. They feared that an Assembly without tax raising powers would cut local government grants as the only way to increase its own finances. Local authorities would be forced to increase rates to pay for Assembly services as well as their own.

Ironically, the change to single tier authorities in the 1990s under the Conservatives facilitated the establishment of a Scottish Parliament though that was clearly not the intention. But the abolition of the regions removed powerful strategic bodies that were capable of standing up to central government, as witnessed with Strathclyde Region’s water referendum. Community councils were set up in the 1970s and survived the reorganisation twenty years later but remained patchy across Scotland.

Debate on establishing a Scottish Parliament in the 1980s was influenced by the deteriorating relationship between central (Scottish Office) and local government. In the words of the Constitutional Convention’s blueprint Scotland’s Parliament Scotland’s Right, published on St Andrews Day 1995: ‘The creation of Scotland’s Parliament will mark a distinct change of approach by placing a culture of stability at the heart of the relationship between the Parliament and local authorities’. Appointments to quango Scotland, especially under Michael Forsyth as Scottish Secretary, contributed to demands for a more democratic system. This led many previous opponents to embrace devolution and broadened debate. Devolution 1970s-style had been a response to nationalism. As it developed in the 1980s, reform was broader, about creating a system of government designed to encourage more openness, transparency, subsidiarity, participation and was envisaged as more than planting a new elected institution on top of the existing system of government.

The 1998 devolution white paper was explicit: ‘In establishing a Scottish Parliament to extend democratic accountability, the Government do not expect the Scottish Parliament and its Executive to accumulate a range of new functions at the centre which would be more appropriately and efficiently delivered by other bodies within Scotland. The Government believe that the principle that decisions should be made as close as possible to the citizen holds good within Scotland as it does within the United Kingdom’. This thinking was reflected in the Constitutional Steering Group’s key principles to guide the implementation of devolution: sharing power between the people, the legislators and the Executive; accountability of the Executive to the Parliament and both accountable to the people; access and participation of the people and legislators in decision-making; and promotion of equal opportunities for all.

Taken together, these principles would have amounted to a radical change in how Scotland was governed, suggesting a participatory form of democracy. A Commission under Sir Neil McIntosh was established following the 1997 referendum to consider relations between the new Parliament and local government. A new era beckoned. But McIntosh’s recommendations were only partially implemented. And while central-local relations improved in the early years of devolution, lubricated by public spending growth unseen outside wartime, the fundamentals had not changed. Local government remained ‘mere tenants at will of the legislature’ – just that the legislature was now Holyrood rather than Westminster. Even a study in the honeymoon period after devolution’s establishment found that neither local authorities nor Scottish Executive officials saw evidence of the ‘parity of esteem’ McIntosh called for. The forward march of centralisation was not halted.

Perhaps if we had paid more attention to what had happened in Spain and Belgium where regional governments were centralising power, then this might have been anticipated. Instead, European experiences were scanned to find evidence that supported the claim of right to a Scottish Parliament and avoided anything that raised awkward questions. Warnings had been made which in retrospect should have been heeded. In April 1991, John Stewart of Birmingham University’s School of Public Policy and one of the leading authorities on local government privately expressed disappointment that: ‘radical principles stated were not always developed as far as I had hoped in practice. The approach to taxation powers for example seemed unduly cautious, although I can understand the politics of the situation that made it necessary. More fundamentally I saw the statement that sovereignty rests with the Scottish people as very important, but was disappointed that it had not been more developed in practice. I would have liked to have seen the Act constituting the Scottish parliament requiring the consent of the Scottish people before it could be changed. I would like to see a commitment to local government more strongly expressed’.

In May 1991, Bruce Black, secretary of the Constitutional Convention, expressed a ‘continuing worry that very little detailed preparatory work, either administrative or conceptual, seems to be in hand for the establishment of the Scottish parliament and its consequences for many other sectors of Scottish life, including not least local government’. But these concerns were kept private for fear of undermining the efforts, enthusiasm and hope invested in the Convention.

It was probably inevitable that attention focused on the new Parliament and Executive in the early years of devolution. The exceptional levels of public spending helped hide weaknesses and the improvement in central-local relations contributed to wider reforms were not pursued. There was a brief, but passing, revival of the spirit of 1999 in 2007 but the Scottish Government-COSLA Concordat was a false dawn. The language describing the Concordat by the Scottish Government and COSLA at the time suggested momentous change: historic, ambitious, ground-breaking. But, as so often, soaring rhetoric was not matched by practice. Many controls were lifted, single outcomes agreements adopted, ringfencing removed allowing for more autonomy. But it would not be long before micro-management returned and this time with a vengeance. Local government experienced cuts greater than anything the Scottish Government itself experienced from UK Government and the long march of centralisation recommenced. It was the public finance version of trickle down. The situation was worse than councillors had in the 1970s feared. Not only were grants cut but authorities were prevented from raising revenue and how money was spent increasingly determined by the Scottish Government.

And then came the independence referendum. The levels of civic engagement far surpassed anything previously seen. On its first anniversary, Nicola Sturgeon described the independence referendum experience: ‘We discovered our voice – and found that as a nation we could make the world listen. We surprised ourselves’. This discovery led to proposals and high hopes for a more participatory democratic system of government. The lack of community empowerment had been criticised prior to devolution and despite the rhetoric of self-government that imbued the Constitutional Convention’s deliberations was never really embedded in the new devolved system. But community empowerment has been partially and inconsistently applied. Participatory budgeting is required of local government but not across all public services. A Government that accumulates, hoards power and undermines alternative sources of democratic authority and legitimacy lacks credibility in demanding evidence of community empowerment in others.

Power has not been shared between the people, the legislators and the executive. We inherited the Westminster system of government. Relations between the Parliament and Government are more imbalanced than at Westminster. The very features of the old system that led to demands for change have become all too obvious in post-devolution Scotland. The Scottish Parliament’s committee system is much weaker than that in the Commons. Accountability may have improved compared with pre-devolution times but that is hardly a high hurdle.

An allied trend that ought to concern us is the silo approach to local decision making. Local government grew out of amalgamations of diverse ad hoc arrangements. Education authorities were merged with public health bodies, including housing, in recognition of the need for collaboration and joint working. Local government was the local embodiment of joined-up government but we are slowly drifting back into functional silos. We are witnessing a return to nineteenth century. Once more the rhetoric points in the one direction but revealed preferences, i.e., what is revealed by action, point in another.

In February 1992, Jean McFadden, former leader of Glasgow City Council and academic public lawyer, argued for a power of general competence for local authorities allowing local government to ‘act and innovate freely on behalf of their communities without specific parliamentary approval’, thus widening the scope beyond being ‘creatures of statute’. She also suggested that local authorities should have ‘constitutional recognition’: ‘At the moment, a simple majority vote in both Houses of Parliament could ensure the abolition of all local authorities in Britain … Constitutional recognition would guarantee the existence of local government. It could also mean that major change could not be brought about by a snap parliamentary decision, but only after the communities concerned had been fully consulted’.

The failure to address these deficiencies makes Scotland stand out as an outlier along with the rest of the UK in European local governance. For all the talk of being more European, of abandoning the Westminster model of government, today’s Scottish polity looks as insularly British with a Holyrood cherry on top of that which existed pre-devolution.

How we constitute ourselves is one of the most basic, if multi-faceted, issues in politics. It has to be about more than creating a Parliament and accumulating power for the executive in the Parliament’s name. We have lost sight of the ideals of self-government that animated earlier debates and stuck with a Scottish variant on the system that was supposed to be rejected. For all the talk of popular sovereignty, what has emerged is a mini-Westminster in which the executive is dominant, Parliament is compliant and any other potential sources of legitimacy are denuded of authority. The central paradox of Scottish politics has been that in the desire to find an alternative system we have ended up with a system of government that is essentially the same as the Westminster system. We have neglected deficiencies in our system of government, in how we constitute ourselves with this narrowing focus. Relations with the rest of the UK are important but there is so much more that demands attention. May’s local elections will likely become another referendum on whether we should have a referendum, negating the principles on which the new system was supposed to be based. We need fresh thinking, prioritising local issues and evidence that power is shared from parties.

James Mitchell is Professor of Public Policy at the University of Edinburgh. His Jimmy Reid Foundation pamphlet which examines some of these issues is called ‘The Scottish Question Revisited’ and is available for purchase at: https://reidfoundation.scot/the-scottish-question-revisited-pamphlet/

Breaking, breaking – this just in: Holyrood can change things!