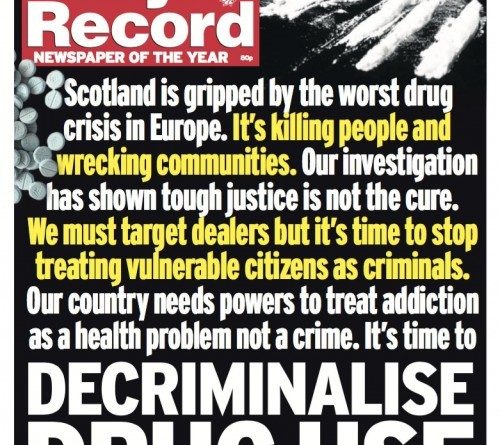 Calum Rosie argues that only deep-seated, radical action can address this scourge in our society.

It has recently been announced that Scotland is, yet again, the ‘drug death capital’ of the world, with over double the number of drug-related deaths than any other European country. This is a damning statistic, but for anyone living in Scotland, it is not a surprising one. Hard drugs have been a part of Scottish life for decades now, and the associated death count has been rising year after year. It is an undeniable healthcare and human rights scandal that continues to be ignored by the government and underreported by the media, with too many causes and too few solutions.

Of these solutions, many are implemented by private citizens and charities without the support of the government or the Scottish legal system. Activist, Peter Krykant, was charged with obstruction after refusing to allow police access to his mobile overdose prevention centre, where addicts can use sterilised equipment safely with trained staff on hand in the event of an overdose. This is just one example of how the Scottish Government is currently standing in the way of progress – if we treat those attempting to reduce the death rate in our country as criminals, how can we hope to address the problem fully? Similarly, many voices – like the SNP conference in 2019 – are calling for the decriminalising of drug use, which would allow us to treat drug addicts as patients rather than as criminals.

But these proposals, admirable and deserving of support as they are, merely treat the symptoms of addiction and drug deaths, and do not address the root of the issue: mental health. So often, drugs are used as self-administered medication to deal with mental illness caused by present stresses and past traumas, and the Scottish and UK-wide governments have repeatedly shown little desire to support meaningful mental health reform.

So, what needs to be done? If you ask anyone who works in social care or the mental health (or healthcare at large), they’ll tell you the same thing: that while our social care sector is staffed by incredibly selfless and hardworking people, the system itself is full to bursting. There just aren’t enough resources, bodies, or funding to fully address the mental health crisis that our country is facing. Step one would, therefore, be to fully fund this section of our society.

One way to do this is to address how healthcare is funded in Scotland, and where responsibility for it lies. Currently, each council area is liable for its own healthcare – which means that the Scottish Government does not have to take effective responsibility for the high number of drug deaths. This needs to change. Scotland must treat this as the national emergency that it is, and make sure that funds and resources to tackle the problem are made available in every area they are needed and as soon as possible.

Beyond this, we need to address what is causing the mental health problems in our society, and why it seems to be particularly bad in Scotland. One undeniable exacerbation of the problem comes from the fact that the shame surrounding addiction is palpable in Scotland. The term, ‘junkie’, is tossed around with abandon, and people who use drugs are looked down upon as worthless members of society. By educating the rest of the country in drug addiction and drug use, this stigma can be reduced, and we as a society will not be contributing to the worsening of this health crisis.

What’s more, studies show that poverty and mental illness go very much hand in glove, which means that poverty is very likely an early step on the road towards addiction. Scotland’s drug problems really took off in the 1980s, which also saw widespread poverty and inequality, and until Scotland can address the cancer of poverty, we will continue to see thousands of Scottish people die at the hands of drug addiction.

Luckily, there are plenty of ways to tackle poverty, if only government would take the first steps – which, interestingly, it already has during the lockdown. Introduction of a government subsidised wage has given security to millions of people, while the UK government provided housing for thousands of unhoused people across the country, albeit briefly. An extension of this post-pandemic would be the introduction of a universal basic wage and investing heavily in social housing, providing a secure social safety net to help assuage some of the most common causes of depression and anxiety among our nation’s most vulnerable. While universal basic income is an idea that has floating around the Scottish Parliament recently, the government has recently announced a cut to housing spending, which will only increase the pressure on our society’s poorest, with widespread adverse effects on mental and physical health.

So, while the Scottish Government’s £250m commitment to tackle the drug problem may seem like a good start, all of this money is going towards treating the symptoms of drug addiction, and not the cause. Systematic change needs to occur to address the economic needs of the Scottish people, to bring our nation’s poorest out of poverty, and give them help above and beyond the bare minimum. Because if we don’t, Scottish citizens will continue to die in their thousands, something that will weigh heavy on the conscience of the nation.

Calum Rosie is a writer based in Edinburgh, and correspondent for Immigration Advice Service (https://iasservices.org.uk/).