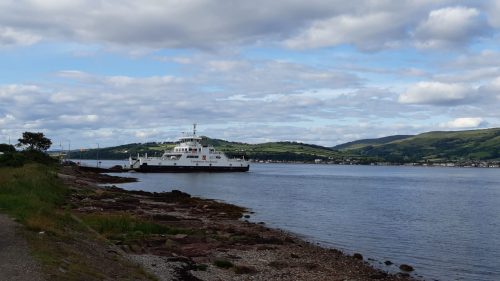 Alf Baird tells a woeful tale of incompetence, arrogance and worse on the high and low seas.

The recent offer to the Scottish Government by Clyde Catamarans Group, led by Scots born naval architect Dr Stuart Ballantyne, a global leader in ferry design, to build perhaps 50 or more new ferries for Scottish domestic routes reflects wide dissatisfaction with the continuing ‘catastrophic failure’, according to the Scottish Parliament’s Rural Economy and Connectivity Committee, in Scottish ferries policy. Critical in this regard has been an inability to replace older ferries or maintain existing services to acceptable levels or at affordable cost, amidst a backdrop of ever rising subsidy levels and constraints on public sector spending.

So, what’s the real problem and how can it be sorted? Well, most of Scotland’s ferries in domestic operation today are close to or exceed 25 years of age. Many developed nations have laws that prohibit use of ferries over 25 years old, mainly for safety and/or environmental reasons. This implies that much of the ferry fleet still operating in Scotland today would be illegal in other countries. Some of the ferries still in use in Scotland do not even meet disability requirements.

Older ferries suffer from more frequent breakdown and obtaining parts is problematic, which means added cost of repairs and increased service downtime and customer dissatisfaction. Here it may be noted that Ballantyne’s designs were found by Strathclyde University to also be the safest on the market, no doubt one of the reasons he has sold his ferries in over 40 countries, including up to 30 new boats recently for The Philippines alone, the latter historically having one of the worst ferry safety records. If a Scot can supply 30 safe and efficient ferries to The Philippines, why would there be a problem in allowing him to supply 30 or 50 or even more ferries in his ain homeland?

To understand this, we need to consider why Scotland currently gets it so wrong on ferries policy compared with other countries. From my perspective in researching international ferry industry developments and strategies over the last 30 years, which includes collaboration with some of the best ferry designers, it is obvious that CalMac is still specifying very expensive conventional monohull prototype designs. These poorly designed boats cost twice as much as Ballantyne’s successful proven designs, and also take twice as long to build.

CalMac’s ferry designs have twice the weight and a higher block coefficient than more optimised proven hull forms and bow shapes. This means they require twice the power and, therefore, incur twice the fuel consumption, and hence twice the operating cost over their useful lifetime. So, as well as being less safe, and twice as expensive to build and operate and taking twice as long to build, CalMac’s monohulls have double the CO2 emissions compared with Ballantyne’s proven designs. The far higher operating cost extends over the entire expected lifetime of a ferry, i.e., 25 years, which means a lot more subsidy is needed in Scotland than elsewhere, to provide the same ferry service.

Who is responsible for this? Behind what passes for ferry service ‘delivery’ in Scotland sits a dysfunctional tripartite institutional grouping that decides ferry specifications and leads on procurement of boats. The initial and critical ship specification surfaces from deep inside CalMac, where very expensive spec end up looking more like mini-cruise ships rather than what is actually needed, i.e., maritime buses. CalMac then hands its deluxe ship spec to the government’s ports and ferries infrastructure agency, CMAL. CMAL personnel, who also do not appear to have much in the way of high-level naval architect or shipping economics qualifications, then inform the wider shipbuilding community how much is in their budget before selecting a yard to build their proposed ship spec prototype. Because the vessels are always prototypes, CMAL boats invariably take longer to build than envisaged and this can also result in added problems for the yards chosen, the last four of which all appear to have gone bust after ‘winning’ a CMAL/CalMac tender, including Ferguson Marine twice!

The third element of the tripartite is Transport Scotland and its civil servants which provide the finance to ‘procure’ the boats and they likewise know very little about basic shipping economics, far less naval architecture. A hapless Scottish Transport Minister, whoever this happens to be at any given time, signs off on all this nonsense, one suspects more in hope than expectation given the repeated procurement failings, delays in build and ever higher costs. In typical public sector manner, nobody is ever held accountable, though when things start to get tough powerful vested interests usually find a convenient such as Derek Mackay.

The two unfinished ferries still lying at Ferguson Marine after six years and over £300m later – the original budget for these two boats being £98m – is the main fiasco, leaving many island communities in the lurch as the knock-on effect of lack of new ships impacts the wider network. Evidence presented to successive Holyrood committees suggests much of the blame falls on CMAL which persisted in making constant changes to its already poor prototype design, resulting in Ferguson’s yard eventually going into administration. Whether CMAL acted to intentionally put Ferguson out of business, perhaps because the yard was not necessarily its first choice, the CMAL board’s preference being overridden by Ministers, remains unanswered. Nevertheless, this was the second time Ferguson had gone into administration in little more than four years after trying to build prototype ferries for CMAL, with other foreign yards also experiencing difficulties. CMAL orders, therefore, appear to be something of a poisoned chalice due to poorly specified prototypes subject to constant and costly changes.

So, what should be done? The main barrier to change seems to be Scottish Government officials and agencies and their ‘red lines’ on what they are prepared to do, or rather not do, plus, of course, the dubious ship spec prototypes which emanate out of the bowels of CalMac as the root of the problem. Consultants have again been commissioned to look at options to help fix matters, one of which appears to return CMAL activities back into CalMac from whence its ‘asset management’ functions originally came from some 20 years ago. That may remove a problematic procurement agency but the prescribed ship spec prototype ‘strategy’ remains.

What do other ferry operators do? We do not have to look far to discover a multitude of private ferry lines building far more efficient ships at much lower cost and operating very successful services, with plenty of happy customers. Non-subsidised Pentland Ferries in Orkney is now on its second big steel-hull catamaran based on the successful Ballantyne’s designs, each acquired for less than half the price of a CalMac equivalent, and with both ships taking half the time to build too. Similarly, Western Ferries simple yet sensible 40-car capacity ferry designs come in at only around one third the cost of CalMac’s 23-car capacity ‘heavy hybrid’ small ferries.

The tripartite crudely allege Ballantyne’s catamarans ‘winnae wirk in Scottish watters’, though such claims and associated fallacies are proven to be at best mischievous and misleading. The state tripartite has simply now been found out in its dysfunctional prototype ship spec and costly and problematic procurement methods. State vested interests have tried their best not to be rumbled and cannot admit their incompetence, malfeasance or worse, hence, the descent into a rather pathological denial and continuation with even more costly procurement mistakes.

The ship spec selected represents the cost structure of a ferry operator and the more costly the ship is to build and operate, the more subsidy is needed. Matters have gotten a lot worse over the years: whereas 30 years ago CalMac’s operating subsidy accounted for around 20% of revenue, today it is closer to 80%, equivalent to £1 billion every eight years. This excludes capital grants for new vessels and piers, which on current projections probably amounts to another £1 billion over eight years. And all we have to show for this increasing public expenditure is an obsolete outdated fleet, an ongoing procurement fiasco, and island communities and economies left in the lurch.

Must the state-run ferry services and own ferry fleets? State-run ferry services are clearly a more expensive and highly problematic option. We simply never see this kind of mess in the wider European private ferry sector, albeit they are also running subsidised services via tender. The current approach here is no longer meeting the needs of island communities who are extremely dissatisfied with worsening CalMac services. If management is a problem, as appears to be the case with CMAL and the tripartite group more generally, then new management is surely required. But changing an organisation’s culture, its ‘way of doing things’ is never easy and public officials are seldom held to account for their actions. As the initial CalMac ship spec is at the root of the problem, that also needs addressed.

Despite these obvious failings, Scottish Ministers continue to allow Transport Scotland to finance CMAL’s procurement of CalMac’s costly prototype ship specs. Currently two £50m ferries are on order in Turkey, and another two boats to the same as yet un-built ‘spec’ are to be ordered by the end of 2022. In its ‘small vessel programme’, a further seven prototype ferries may soon be ordered, probably costing another £150mn or more. Given CMAL’s past record, ever more delays and shipyard problems with the ongoing procurement of costly unproven prototypes must be expected.

Nautilus and RMT unions and their members are missing out on a major opportunity here. If Ballantyne’s proven, safer designs were built for half the price of CMAL/CalMac’s prototypes, this means that twice as many ferries can be built for the same amount of money. In addition, if these proven (and safer) designs can be built twice as fast as CMAL’s, then the current obsolete fleet of 30 ferries (plus another 20 needing replaced in Northern Isles) can be replaced much faster than is currently the case. My own research suggests Scotland is under-provided for and needs perhaps twice as many ferries as at present. The only way that can happen is by moving to more efficient types of ferry as proposed. The opportunity exists to build these proven designs in Scotland, as the Clyde Catamaran Group suggests. Scottish Ministers, however, seem unwilling to consider this, never mind facilitate it, which appears short-sighted.

What do I expect to happen? In reality, not much. Here the Scottish left needs to better understand Scotland’s manifest barrier to progress and what lies at the root of inequality in our society, which is not just about social class, or capitalism versus socialism, but the way in which an oppressed and, yes, colonised people and their resources and culture are controlled and exploited by a mediocre meritocracy. The real reason millions of talented Scots like Ballantyne had to move away from Scotland was because of the lack of opportunity afforded to a native people in thair ain laund. This brings us to the realisation of what independence really means. Only by truly understanding our ‘condition’ might we begin to see any actual progress in the further development of the Scottish people and nation. Until then, we will continue to live in a world of Manichaeism, where darkness drowns out the light.

Dr Alf Baird was Professor of Maritime Business and Director of the Maritime Transport Research Group at Edinburgh Napier University. He is a Member of the Chartered Institute of Logistics and Transport. More information can be found at