Ahead of the Holyrood 2021 elections, Colin Fox argues all that is solid just might melt into air

With less than a year to go until the Holyrood elections, the opinion polls appear to suggest the result is a foregone conclusion. The SNP is at 52% support, according to a May 2020 YouGov poll and looks set for its fourth win in a row. And yet? Well, given what lies ahead, who can say what Scotland will look like in May 2021. The full, long-term impact of the coronavirus, unknowable at this stage, will surely be seismic. The collapse in economic output over the past four months will leave many Scots at the mercy of forces way beyond our shores. The decline in living standards threatens to be unlike any seen in the Holyrood era.

Nicola Sturgeon’s handling of the pandemic has earned her respect but she has made mistakes. She may be adept at ‘spin’ but her fundamental strategy was the same as Boris Johnson’s and included the same initial inaction, the same shortages of equipment and even more shocking numbers of care home fatalities.

‘Of all the UK’s mis-steps in tackling coronavirus, the epidemic in the care homes is the worst’ thundered the Financial Times (15 June 2020). It continued: ‘In Scotland, half of the 4,000 deaths have occurred in facilities that were under resourced and ill-prepared for the crisis’.

Tough questions, therefore, lie ahead for Sturgeon when this pandemic is over. Many of us believe the case for a National Care Service free at the point of need, publicly owned and run alongside the NHS is now overwhelming (see also Stephen Smellie, this issue). This is unfortunately not the view taken by the SNP which wishes to retain the private sector model.

This is, therefore, another issue where the SNP has bullied many on the ‘soft Left’ in Scotland into swallowing things they shouldn’t. The same charge can be levelled at their public spending cuts, their privatisation of NHS facilities like Edinburgh’s Sick Children’s hospital, their neo-liberal economics as outlined in the Sustainable Growth Commission and their evasion on the abolition of the council tax.
There’s also ‘indyref2’, where the SNP wasted four years tying the case for independence to membership of an anti-democratic, neo-liberal EU. It didn’t lead to the majority support for ‘yes’ it predicted it would.

The SNP strategy for securing that second vote was even more inept. It rightly ruled out a Catalan-style ‘fringe vote’ which hardly worked out well there. But the ‘dogs in the street’ know Britain will not grant permission for a second independence referendum so the Section 30 route is clearly a dead end. And with the SNP opposed to extra-parliamentary tactics, the cause is stuck in an impasse and losing momentum. The nationalists appear more interested in keeping their parliamentary seats and large salaries than in advancing the cause of independence.

The impending ‘civil war’ between Alex Salmond and Nicola Sturgeon reflects all these underlying conflicts. Salmond is adamant his successor as First Minister and SNP leader conspired to level serious sexual assault charges against him. Had those charges been upheld he would have gone to jail for a long time. His court victory in February, however, was diminished by evidence offered in his defence which conceded his behaviour as First Minister often demeaned the office and did him no credit. But having won his case, he is out for revenge. He intends to publish a ‘warts and all’ expose in November alleging Sturgeon plotted against him and, more damagingly, that she lied to Parliament about her own role in the failed civil action of 2018. It is inconceivable the SNP will emerge unscathed from the book, the forthcoming parliamentary inquiry or this exceedingly acrimonious public feud. Sturgeon faces the most damaging battle of her political life. It remains to be seen whether she emerges intact to lead the nationalists into the next election.

So, regardless of who leads it, the SNP must defend a record of orthodox managerialism that undermines its claim to be ‘social democratic’. It pursued a conservative policy agenda on all the ‘big ticket’ items: economic management, taxes, industrial strategy and combating inequality. It has tacked to the right politically since 1990 because it believed the electorate had already done so. It embraced privatisation despite having fought it in opposition. It backed the warmongering NATO alliance after having fought against it for 50 years. Its failures on the issues that matter most to Scotland’s working class majority provide the basis for the deep seated contradiction between the SNP’s electoral success and their conservative politics. So how do they pull it off?

Money plays a part. The SNP runs an expensive and powerful party machine. It buys into all the latest political science techniques, digital communications, intensive private polling, complex social media analytics, employing hardened career politicians and ’special advisers’ all seeking to give the electorate what it thinks it wants.

Yet for all its ‘spin’, there has been little meaningful change in the Scotland it took over in 2007. The same virulent inequalities remain and the same working-class communities are left behind. The same management of the established order for the rich and powerful prevails. With the 2020 pandemic having ripped up the political playbook and with unchartered economic waters ahead, new challenges will inevitably emerge. It is not difficult to feel the change that is coming. But you can also sense the old world, the one the SNP once dominated, has been left behind. In these circumstances, it wouldn’t be wise to predict the future based on opinion polls conducted this far out from May next year.

In August 2019, the SSP sent Bill Bonnar to visit the Venezuelan capital, Caracas. Here is his report The picture 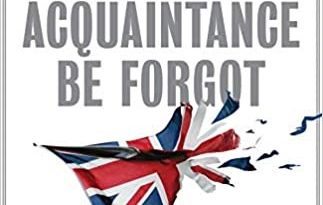