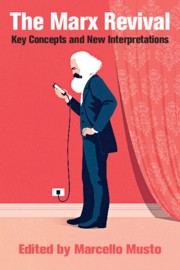 The focus of this book is announced in the title, The Marx Revival: Key Concepts and New Interpretations, and its essays by 22 contributors are symptomatic of renewed interest in a thinker who can no longer be shackled with responsibility for abusive state power. Chapter headings are to the point – Communism, Class Struggle, State, Ecology, Migration, Colonialism and so on – and the prose mostly keeps to an equally no-nonsense approach. This makes the edited collection a Marx for our times.

The first essay kicks off with neat exposition of some basics: capitalism’s drive to create surplus value through commodity production; money as means and motive for creating capital and the consequent distorting of human relations; the system as a structure (capitalists die like everyone else but the system carries on) that is incredibly versatile but inherently unstable and, ultimately, its own gravedigger. Traditional readings emphasise economic crises and increasing immiseration as capitalism’s gravedigger but climate change calls for a rethink and an appreciation of Marx’s importance as an ecological thinker. Nature, seen as a ‘free gift to capital’ (the quote is from Capital) and not part of the system’s value algorithm, can be destroyed in the drive to accumulate profits. The ‘Ecology’ chapter makes clear Marx’s insight into what he called the ‘social metabolism’ between man and nature and the chapter goes on to relate this to climate scientists’ warnings about a planetary disaster.

There is no chapter on ideology, not even an index entry, but Marx was presciently aware of what he described as ‘the bewitched, distorted and upside-down world haunted by Monsieur le Capital’. Contemporary examples would be the marketing of zero-hour working and creeping privatisation of the NHS as a new freedom of choice. Not surprisingly, aspects of everyday life under corporate control can come to be experienced as a kind of alien rule. How easily people can be controlled into accepting this – as depicted in the superb Captive State movie – needs also to be examined through the lens of Marx; something that writers like China Mieville, Žižek, Terry Eagleton or Paul Mason could tackle with fluency but who are missing from this collection of articles. But this remains an important book, asking and offering some answers to the question of what kind of Marxism is emerging in the world we now inhabit and what it can mean to call oneself a communist.

Sean Sheehan writes for The Irish Times, LensCulture and The Eye of Photography