Those who cherish the notion that left-wing radicals, given time, will metamorphose into ultra-conservatives like themselves tend to be peeved by people like Tony Benn and Jeremy Corbyn for so obviously contradicting their mantra. If William Morris’s thought received some of the attention devoted to his wallpaper, his political trajectory would prove especially irksome: for, as the subtitle of this biography indicates, here was someone who matured from ‘romantic to revolutionary’ and constitutes a case of more than just pretty wallpaper.

Morris’s early interest in art and architecture fostered a rhapsodic immersion in medievalism and a never-abandoned admiration for craftsmanship in pre-capitalist modes of production. The company that he and other artists founded designed furniture, carpets, jewellery, stained glass, metal work and, of course, wallpaper – all characterized by bright colours, though towards the end of his life he expressed a preference ‘to live with the plainest whitewashed walls and wooden chairs and tables’.

He was in his fifties when the political course of his life began to unfold and it occupies two-thirds of this still definitive biography by the historian E. P. Thompson. First published in 1955, revised by the author in 1976, this is a splendid new edition from Merlin Press. Morris joined an early socialist party, the Social Democratic Federation (SDF), in 1883, five years before Marx’s Communist Manifesto appeared in English; he learnt about class conflict from a French edition of Capital. He got to know refugees like the anarchist, Kropotkin, and took to public speaking, making him a heretic for the establishment: ‘you can carp at the masters in the prefects’ room, if you like, but don’t let the Lower Fourth hear you’, admonished the Master of University College, Oxford.

Following a split in the SDF, Morris worked tirelessly for the Socialist League but, dismayed by factional disputes, left it in 1890. He continued to give political talks until the year of his death in 1896. Morris possessed prodigious energy but his disposition was nervy; his body wore itself out prematurely and he died at the age of 63. Thompson does justice to his art and intellect, a political thinker who had his disputes with anarchists but remained at heart a libertarian socialist. John Blewitt’s William Morris & the Instinct for Freedom, also published by Merlin Press, extends an understanding of his intellectual and cultural heritage. 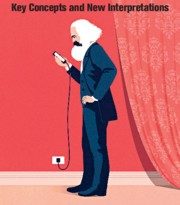