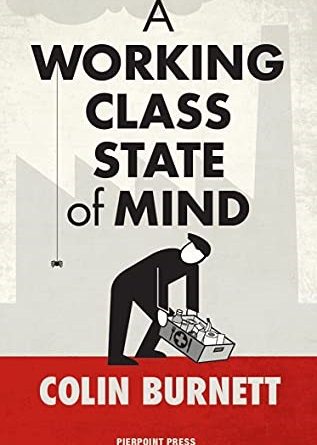 The title of the first short story in this set of twelve, ‘A Working Class State of Mind’, gives its name to the collection as a whole. The story transforms Robert the Bruce into a depressed young man contemplating suicide as he sits alone in his freezing cold flat. Alone that is except for a spider he observes trying ‘to swing oantae the shelf wae aw its being, but still couldnae muster the strength tae to make it’. The spider’s indomitability imbues the man with the Beckettian resolve to try again, probably fail again but at least to ‘fail better’. The tale, superbly well-written, shifts between inner turmoil and the social plight of those on the verge of giving up the struggle to get through another day.

This opening story casts the light of harsh reality over the droll antics of a resilient set of pals determined not to be sunk by the systems of the state. Dougie, the main narrator, is learning from his experiences while the irrepressible, Aldo, and their friend, Craig, are able to cope with their penchant for the innocuously named white powder, ‘snow’, they sniff on a regular basis. Written in east coast Scots the stories have a masculine bias that occasionally irks but the comic spirit, infused with a Frankie Boyle-like spiky humour, makes them a hoot to read. They also display the fierce class loyalty that distinguishes James Kelman and this gives them an extra punch.