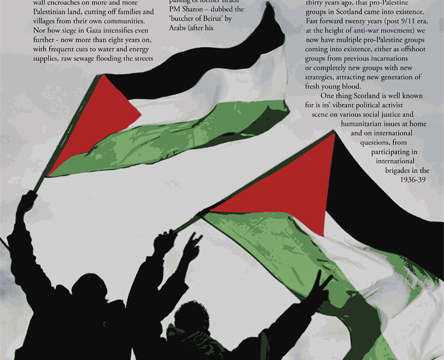 The Scottish National Party shook off the accusation that they were ‘Tartan Tories’ long ago. Indeed, their dominance of Scottish politics over the last decade has, to a considerable degree, been founded on the idea that they are politically progressive in both domestic and foreign policy. However, on the major international issue of the Boycott, Divestment and Sanctions (BDS) movement against the state of Israel, the SNP leadership stands accused of turning its back on the Palestinian people and, in effect, siding with Israel.

In August 2017, during the Edinburgh Festival Fringe, supporters of Israel hosted what they called the ‘International Shalom Festival’. First Minister Nicola Sturgeon offered fulsome support to the event, as did then Scottish Labour leader, Kezia Dugdale, and Scottish Conservative leader, Ruth Davidson.

Sturgeon appeared to accept at face value the claims by the festival’s organisers to be staging an ‘apolitical’ event aimed merely at ‘promoting coexistence’ between Israelis and Palestinians. This was despite the overwhelming evidence that the ‘Shalom Festival’ was the work of long-established advocates for Israel and part of the Israeli Government’s attempt to undermine the increasingly successful international BDS movement.

The founder and CEO of the so-called ‘Shalom’ programme is Nigel Goodrich, better known as the founder of the Confederation of Friends of Israel Scotland. Another key organiser is Sammy Stein, chairperson of Glasgow Friends of Israel.

The event was initiated in 2016, two years after a successful boycott and protest campaign during the Edinburgh Fringe closed down two Israeli state-funded shows (by Incubator Theatre and Pola Dance, the official dance company of the Ben-Gurion University of the Negev). One of those shows, The City by Incubator, was programmed as part of the 2017 ‘Shalom Festival’.

Due both to its presentation of work funded by the Israeli state and its obvious (albeit denied) role in Israel’s efforts to counter BDS, the festival faced calls for a boycott from BDS activists. Sturgeon’s endorsement of the ‘Shalom’ programme put her at odds with the signatories to an open letter to the Sunday Herald newspaper, including filmmaker Ken Loach, which called for a boycott of the event.

The First Minister’s position was also, no doubt, a disappointment to supporters of SNP Friends of Palestine, including Sandra White MSP and Tommy Sheppard MP. However, it was not the first time the SNP leadership had put itself at odds with the Palestine solidarity movement.

Back in 2014, during the high profile boycott campaign on the Edinburgh Fringe, culture minister, Fiona Hyslop, spoke against the boycott, on the grounds, she said, of ‘freedom of expression’. She failed to explain whether she had taken the same position in relation to the international boycott of the apartheid state in South Africa.

The SNP leadership made a mockery of Hyslop’s position a little over a week later when it announced that Scottish Government ministers, most prominently Hyslop herself, were boycotting productions in the UK-Russia Year of Culture in protest at the Putin administration’s policy in eastern Ukraine. As Wael Shawish, vice-chair of the Association of the Palestinian Community, Scotland, wrote in a letter to the Sunday Herald in August 2017: ‘It is a sad state of affairs when the Scottish Government seems to set the value of Palestinian lives lower than those of lives in Ukraine.’

Even if the SNP leadership had not contradicted its own position regarding ‘freedom of expression’, its seemingly libertarian stance against BDS fails to take into account the way in which Israel attempts to use state funding of the arts as a propaganda tool. A standard Israeli Foreign Ministry contract for artists it funds to travel abroad states: ‘The service provider [i.e. the artist] is aware that the purpose of ordering services from him is to promote the policy interests of the State of Israel via culture and art, including contributing to creating a positive image for Israel … The service provider will not present himself as an agent, emissary and/or representative of the Ministry’.

Inspired by the international boycott of apartheid South Africa, BDS has built an impressive coalition of Palestinian and international forces which consider Israel to be an apartheid state. Significantly, Bishop Desmond Tutu is a supporter of BDS. He says: ‘I know firsthand that Israel has created an apartheid reality within its borders and through its occupation. The parallels to my own beloved South Africa are painfully stark indeed’.

For many, if not most, people on the left in Scotland, support for BDS is an essential element in any politics that claims to be progressive. Yet, however strong BDS advocacy is among the SNP rank-and-file and sections of the parliamentary groups at Holyrood and Westminster, the party leadership has adopted and maintained a position that draws them much closer to the Israeli state than to the struggle of the Palestinian people.