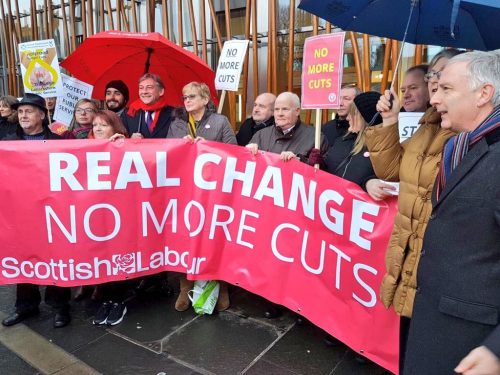 Richard Leonard believes the case for an economic and environmental transformation can be won.

There is widespread discontent and it is growing, with school pupils striking and young people, some of whom have no vote but who have a voice that demands to be heard and listened to, taking to the streets. Across all generations, there is a rising determination, which our representative democracy needs to better reflect, on the need for a new urgency of action and a renewed vitality in our thinking on the need for real change. People are tired of a status quo where the idle rich get richer and the working poor get poorer. This is not just the view from Scotland. It is the view from right across these shared islands.

The challenge presented by the climate emergency can only be met by putting unions and communities at the centre of a ‘just transition’ which is part of a wider industrial strategy built upon a national economic plan. It has long been my view that – above all else – democratic socialism is about the creation of an economy run for the many not simply for the few at the top. It is about the establishment of democracy in the economy and the building of an equal society. So, now more than ever it is time for democratic renewal and a redistribution of wealth and power.

Exactly twenty years on from the enactment of devolution, we still have a centralised state and an imbalanced economy. When I became Leader of the Scottish Labour Party, Jeremy Corbyn and I agreed that there was a need for renewed and serious consideration about Scotland’s future constitutional options. This work is underpinned by our shared socialist analysis of the pivotal nature of the distribution of power as well as wealth, and our shared values of the fundamental importance of power being exercised at the most appropriate level. Three years of Brexit have brought this into ever sharper relief.

The Scottish Labour Party wants the UK to stay in the European Union and Scotland to stay in the UK. So, we are the only party in Scotland offering both the prospectus of remain and reform in both. I want to see fewer borders not more. We want to bring people together rather than tear them apart.

And our history tells us that basic inequalities will not be tackled, and economic, social and environmental justice cannot be won, unless we construct a society on the values of democracy and on the enduring principles of socialism. A critical step on this road is the election of a radical transformative Labour Government led by Jeremy Corbyn as Prime Minister. The Labour Government’s programme will radically transform Scotland with a £70bn investment plan and a new £10 per hour minimum wage – regardless of age. It will act to boost rights for workers in the economy and the workplace.

And we will campaign to win the 2021 Scottish Parliament elections with a commitment to reinstate full employment as a goal of public policy, and a commitment to bring about real economic change and a new kind of society – a caring society in which the whole economy is a social economy and every job is a green job.

Economic and industrial planning is required to transform Scotland’s economic performance. If we are to make the change that is so badly needed, it cannot be done according to the central tenets of neo-liberal economics, namely, the old ideas of privatisation, austerity and rolling back the state. It cannot be done, either, through a continued overreliance on imported goods and services, on foreign direct investment or on multinational financial and corporate interests.

Instead, we need an innovative state. That means – at a Scottish level – using the powers that the Scottish Government has in procurement, planning, licensing and investment.   It means establishing a properly capitalised national investment bank in order to secure through public investment and equity stakes the economic rebalancing that we need including growing the size of our manufacturing base, and stimulating locally-owned and worker-owned businesses. It also means investing in new forms of common ownership—co-operative ownership, municipal ownership and public ownership.

Richard Leonard is the leader of the Scottish Labour Party and an MSP for Central Scotland. He was previous-ly a union officer for the GMB union and STUC.