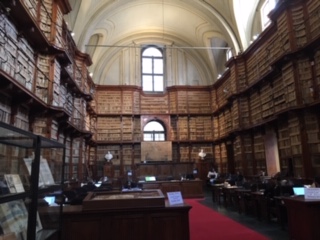 Reflecting on his experience of applying to university, Patrick Phillips gives a critical appraisal

Last summer I applied to ‘attend’ university. ‘What are you attending to, or, for?’ was a question that made me wonder. When we say we are ‘going to university,’ how have we imagined, or rather perceived, what our final destination will look like when it’s all over? Have we as a society become too obsessed in the possessions of degrees, rather than seeing the reality of the modern illusion of having one? Is it not time to reconsider university education as only offering one way of learning and merely as part of a longer, linear experience in the context of a lived life?

This was not my first time in applying, actually it was my fourth. Each time from a different location, Sheffield, Scarborough, Edinburgh and now my latest, Inverness. I was made a ‘Conditional Offer.’ But prior to this offer, having spoken on the phone with the academic leader about the admission process as a mature student, he said ‘if the evidence you submit is not strong enough, I’ll get you to write an essay’. At this point of the call, I was happy, pleased with myself, knowing I had plentiful ‘essays’, which I could submit as part of my UCAS (Universities and Colleges Admissions Service) application.

I had my recent polemic book, which I had completed over a year ago, articles published online, a manifesto and future projects which I plan to go deeper into the experience of human life. I felt in many ways that nothing could stop me now, seeing my chosen degree as part of my overall life’s destiny.

And, then it all came crumbling down – in my own sense of disillusionment – when once again I began to think through the terms of the ‘conditional offer’. Let’s think about the words used here: a condition has now been set, which in reality is holding back the progress of my own life, a man-made condition (pre-set) to the significance of my being in the world.

It was an out of date offer – it should have been for 2020. Information contained therein was incorrect; for example, could I complete an access course during the summer to start my chosen degree for September 2019 (not possible), and mentioning nothing about the telephone conversation I had with the academic leader, who at the time was on holiday (why are programme leaders receiving student applications if they are still on holiday?). I was deeply disappointed and naturally angry.

What had gone wrong and why had this happened? For myself, it seems to me, upon reflection, that the whole farce and lack of effective communication has to do with a form of modern indulgence. Let’s face it, to be a lecturer today has really become a way of escaping from the reality of capitalism, a kind of academic holiday. Life is a breeze. There is nothing really to worry about. There are no real challenges (apart from the challenge itself of being in an institutionalised environment), and I say this because the academic, or lecturer will neither challenge nor disobey their institution. Why? It would be a threat to their already secure existence, which is the status-quo in reality. What we are effectively witnessing here is an unspoken form of neo-ontology.

It seems to me lecturers are full of resentment, often with themselves for wanting to break free from the constraints of the academic bubble they inhabit, namely, an educational system that promises everything to the student but, in reality, delivers very little. Lecturer or academic – they know they are part of the illusion. They envy everyone from outside, and yet they are envied, because they have financial security, a high salary, a decent pension and a life-long future of learning and intellectual promise with a moderate likelihood of interruption.

For the proletariat, a life of but only moderate interruption is still only a dream. Distance between lecturer and proletariat nowadays is a bitter divide, with the wall only getting higher. A good example is how universities today publish thousands of books each year, on every subject and aspect of life, and yet the proletariat rarely read them (usually because they can’t afford them). Society instead still continues to struggle on, with no real improvement along the way. There is a deep disconnection here, between knowledge and experience, where no definitive link has been made.

Therefore, we must decide, which knowledge or experience in the modern world today have we placed the most value upon. And yet both, lecturer and proletariat, still don’t realise how more than ever they need each other if we are to truly transcend the mess of today’s economic tyranny and inequality.

Lecturers live today like the social worker in a kind of surreal reality. They have to live everyday with the contradictions of our present system, not here or there, but face-to-face in ‘disquiet’ with them. I have separated the lecturer from the proletariat class because their struggles are different, even though both desire freedom from today’s ruling-elite. Lectures and academics are aware of the struggle outside but it is a situation which they still choose to do nothing about, and often ignore.

‘You don’t meet the usual entry requirements’ – what an unjust sentence that has become, being unethical and pushing away the uneducated and the minimum wage class which many have been forced to become. This sentence came to me when I considered asking for a second opinion from a different academic leader and of a different degree choice, with an email then stating that their ‘decision was final’ when I requested, under the Freedom of Information Act, information about how they had actually made the decision.

Why have we allowed education to become a commodity? How absurd it has become to live in a society where the natural desire to better yourself (not just from an economic perspective) has been reduced to a UCAS application. And, let us not forget this is effectively a modern form of franchising of higher education, with students being treated as a kind of financial capsule, sold in a sense, keys to unlock (not their true potential) but their neo-Darwin DNA to obtain financial security that can (supposedly) once and for all secure your life, but only if you have in your possession that particularly special degree.

My complaint to the university was predominately about the inhumane admission process and the lack of humanity. How students are treated, in that the whole process of their lives, has been reduced to a game of numbers, filling up budgeting gaps rather than the essence and potential they can offer, not just to the university but to society. This is about the fundamental principle: how can one contribute to society and place genuine value upon oneself under such a dogmatic system? Why have we established an educational system in which it is only offering one way of being recognised and acknowledged for not so much achievement but for experience?

Let’s look at the process. We have a pointless £24 for the so-called privilege to be considered. This covers your employment history, qualifications, personal statement, life experience and the like. My knowledge and experience were still not recognised within the construct of todays’ socio-economic model. I was, in retrospect, doomed. The only value I now have in society today is the level of exploitation which I am prepared to endure. I was told by the vice-principal of the university that in the clearance process of a student’s application, the process is purely a ‘mechanical’ one. Hence, the lack of a personal touch. More excuses – at least that’s how I still see it.

From the response I received to my complaint, in the end, all I was offered was a demoralising and patronising re-worded (and now updated) ‘conditional offer’. I wondered what an ‘unconditional offer’ would feel like? Where I could complete, for over £200, a ‘Thinking and Writing for Study Work and Life’ course? I could not believe it. It was a slap in the face. I mean what I have been doing for the last 34 years on this planet. Does my experience mean nothing? Has all my thinking and writing up until now been invalid? Also, once I’d completed this course, I’d then have to wait until September 2020 (having applied again through UCAS) and then borrow £6,500pa for four years. All this work and effort just so we can spend a bit of time outside of today’s economy. In so many ways, universities are proof that education is a commodity.

I’m not against the idea of a university but I still think that the way they are run is to an unethical standard. Universities today, instead of expanding the imagination of students, are shrinking them through neo-liberal corporatisation. For me, the future university will be a place where people can come and go freely – with no more barriers, no more admissions, and no more ‘entry requirements. They will be a place where everyone can have access to learning for free in order to help improve lives, and crucially, society too.

This is why, in Scotland, I’m still in shock as to why this hasn’t really already happened, Education is already a devolved power and, therefore, there are no excuses as to why not to implement such a reality. As the Scottish Government has for a long time now prevented tuition fees from being paid for home students with the effect that universities in Scotland are substantially funded publicly, universities should run akin to the needs of the people. If we want an economy no longer based on the measurement of GDP but on the well-being of a human life, then ending the barriers to learning, needs to happen now.

Patrick Phillips is an artist, thinker, writer and dreamer (https://patrickphillips.blog/). His photo memoir, The Lawyer’s Dream, about a lawyer who started his own circus, was published in 2019.

Elie of the mind: private schools and social closure