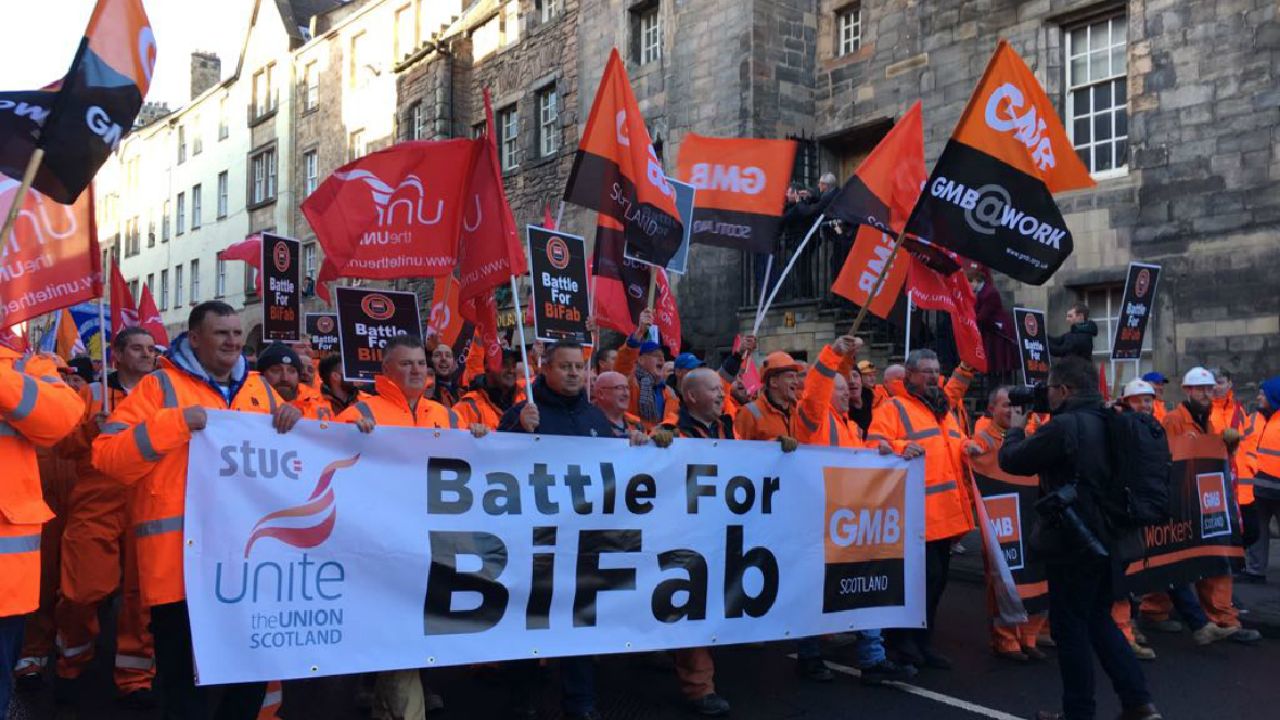 The occupation, accompanied by a work-in, undertaken by hundreds of workers at BiFab (Burntisland Fabrications) in late 2017 to successfully save their jobs serves as a useful prompt to reconsider the utility of the occupation tactic and its frequency of usage as the size of the manufacturing sector continues to contract and as public sector workplaces continue to shut in the enduring ‘age of austerity’.

So, for a week in late November 2017, workers at three fabrications yards (Burntisland and Methil in Fife, and Arnish on the Isle of Lewis) staged a work-in and occupation of the yards in response to BiFab announcing it was about to enter into administration (as a prequel to receivership) as a result of only being paid 40% for the 77% of work it had carried out for its client, Seaway Heavy Lifting (SHL), which had been contracted by energy provider, SSE, to build an offshore wind turbine farm. Workers faced both not being paid their due wages and mass redundancy. The workforce at the yards comprised 250 workers employed by BiFab and 1,150 sub-contractor workers, and were organised by the GMB and Unite unions.

In order to put pressure on SHL and SSE as well as the Scottish Government (which has a green energy policy and licensed the offshore farm), the workers agreed to work without wages with the purpose of continuing production of the jackets for turbines while also taking control of the yards so that, in the words of Gary Cook, a GMB Scottish organiser, ‘Nothing will come and go without the say so of the action committee’ in order to maintain control of their key bargaining chip, the wind turbines jackets, and prevent asset stripping. The workers pledged to continue to carry out the occupation and work-in until Christmas and beyond if necessary to secure their jobs. In a joint statement, the regional secretaries of Unite Scotland, Pat Rafferty, and GMB Scotland, Gary Smith, then said: ‘Make no mistake these yards would be closed today if it wasn’t for the dignity and determination of the workers and their families in Fife and Lewis to save their jobs and industry. With their futures on a knife edge they worked for nothing, stayed strong and resolute and by staying united they have won their future’.

The work-in was used as a legitimatising tactic for the occupation, whereby the workers sought to show that they were the victims who remained willing to work. Management did not obstruct the occupation and work-in, owing to their temporary alignment of interests with the workforce, namely, to gain payment from SHL and SSE for the work done. A high profile, large demonstration was held outside the Scottish Parliament, crowning extensive media coverage during the week. The two unions, working together, called for BiFab to be taken into public sector ownership if the company did go into receivership. These pressures forced the Scottish Government to intervene in order to broker a deal between SHL and SSE to solve BiFab’s liquidity problem with the effect that wages were paid and employment guaranteed until April 2018. The Scottish Government also pledged to provide commercial loans to BiFab if necessary.

The Solidarity newspaper (24 November 2017) opined: ‘The message from the dispute, short as it was, is: direct action works’ and the Scottish Socialist Voice (25 November 2017) ventured: ‘It is [a] timely reminder to workers battling low or falling pay and lousy working conditions of the potential power of united action to protect jobs and living standards. It signals the truth of the old adage, ‘If you stop running they’ll stop chasing you’. Meanwhile, The Socialist (22 November 2017), like other left newspapers, quoted Gary Smith, speaking to workers at the demonstration outside the Scottish Parliament: ‘If you had not occupied those yards then your jobs would have gone and the yards shut’. In doing so, the left press has showed a deficiency in understanding the interaction of processes and outcomes at work and the specificity of the conditions under which they take place. The message that direct action is ‘possible’ and ‘works’ in the case of BiFab particularly does not take into account the factors of group cohesion, generation of a usable bargaining asset, ability to create political pressure, buoyant product demand, and the strategic importance of energy infrastructure.

For example, the aspect of group cohesion was highlighted by solidarity strikes in 2013 and 2015 when directly employed workers at BiFab struck in support of contractor workers, and the intersection of public and private interests provided for the opportunity for both economic and political power to be exercised by workers. Identifying and understanding the existence of such factors as well as their inter-relationships is as vital to understanding why collective resistance is possible as it is to how it can be successfully deployed, and whether such successes can be replicated in other instances because struggle per se is not guarantee of success.

Public awareness of the occupation tactic has been kept alive to some extent in Scotland by the celebration of previous occupations. The manner of these celebrations has given both profile and legitimacy to the tactic. Thus, similar to the earlier thirtieth celebration of the Lee Jeans occupation in Greenock of 1981 involving the production of a BBC documentary and a motion in the Scottish Parliament in 2011, generating sympathetic news coverage, the Caterpillar occupation of 1987 was also marked by a BBC documentary and a motion in the Scottish Parliament in 2017 laid down by Richard Leonard. The Lee Jeans occupation also experienced further iconisation when it was became the subject of a musical performed by members of the former workforce in 2017. The fortieth anniversary of the Upper Clyde Shipbuilders (UCS) work-in occupation was also widely commemorated in 2011 in Scotland with similar celebrations (exhibition, gala concert) and widespread sympathetic publicity. Such celebrations kept alive some popular historical memory of the tactic for the last major occupation of a workplace was the successful seven-week Glacier occupation in Glasgow in 1996.

This suggests, in line with the analysis above concerning group cohesion, bargaining assets, political pressure, product demand and strategic importance, that historical knowledge and public awareness are far from being necessary, let alone sufficient, to generate the usage of the occupation or sit-in. So it is in this context that, while the actions of the BiFab workforce can rightly be applauded, a hard headed analysis shows why – compared to the 1970s and 1980s – that the tactic of the occupation or sit-in has not been widely used by workers since. The hard headed analysis consists of assessing the balance of power between capital, labour and the state with regard to workforce group cohesion, bargaining assets for workers, political pressure, product demand and strategic importance of the work undertaken.

Gregor Gall is professor of industrial relations at the University of Bradford.