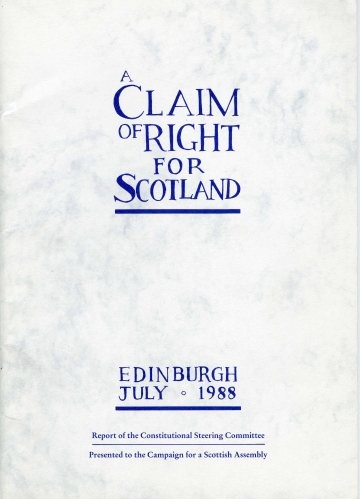 Pat Kelly recalls the struggle for a Scottish Assembly and how it shaped the Parliament we have today.

In his speech at the official opening of the Scottish Parliament on 1 July 1999, Donald Dewar encapsulated the feelings of the country when he declared: ‘For me, for any Scot, today is a proud moment; a new stage on a journey begun a long time ago and which has no end’. It was often a tortuous journey, especially after the bitter disappointment of the 1979 referendum, when a majority voted in favour of a Scottish Assembly but not enough to satisfy the infamous 40% threshold stipulation. The requirement, inserted by George Cunningham, the anti-devolution Scottish Labour MP for Islington South, was supported by a substantial number of Labour MPs. In the referendum campaign that followed, some Labour MPs joined the ‘no’ side. Shortly afterwards, the SNP, which had been propping up a minority Labour government, voted along with the Tories in a no-confidence motion against the Labour Government. The hostility between the Labour Party and the SNP increased to an unprecedented level.

Some stalwarts carried on the fight and only a few months after the Conservatives won the 1979 election and so the Campaign for a Scottish Assembly was founded. Although shunned by the leaderships of the main parties, its supporters included individual members of all parties, trade unionists, and academics. Its objective during the first period of the Thatcher Government was simply to keep the debate about devolution alive.

But the Tory victories in general elections of the 1980s gave impetus to the campaign, especially in the Labour Party. Although they won nationally, the 1987 election saw the Tories reduced to 10 seats out of 71 and only 24% of the vote in Scotland. This electoral decline, together with unpopular policies such as the Poll Tax contributed to the argument that Scotland was suffering from a ‘democratic deficit’. Scottish Labour Action, a left-wing pressure group, was formed to agitate against the Poll Tax and to campaign for Home Rule as the overwhelming feeling within the Labour Party drifted towards home rule. Culturally, the period was highly creative with musicians, writers, and artists contributing to the vigorous debate about Scotland’s identity.

The Campaign for a Scottish Assembly had discussed the idea of a Constitutional Convention, a cross-party gathering of politicians and civic Scotland charged with drawing up a blueprint for a Scottish Assembly. However, it did not have the political clout to shift the main parties towards cooperation and felt the idea would be better received if it came from a ‘representative group of people who were seen to be above the party battle’. This group duly produced the impressively written document, A Claim of Right for Scotland, a persuasive mix of historical analysis and proposals for a Constitutional Convention.

Civic Scotland rushed to embrace the proposals as did the Liberal Democrats. The Labour Party, initially lukewarm to the idea, was won over. However, the SNP felt the Convention would lead them into a ‘devolution trap’ and refused to join. Nevertheless, the Convention went ahead without the SNP with an impressive array of MPs, MEPs, leading members of local councils, churches, trade unions and minor political parties.

Many innovative proposals were discussed and implemented. Crucially, the Labour Party agreed to support proportional representation. The idea of 50:50 representation of men and women, initially coming from the STUC Woman’s Committee, was adopted in the scheme. The term ‘Assembly’ disappeared to be replaced by ’Parliament’, and the Campaign for a Scottish Assembly followed suit. The blueprint was ready for the expected Labour victory at the 1992 General Election. The agony of a further set back on the long journey to a parliament broke many hearts but three days after the election, 5,000 people responded to a call from the hastily formed Scotland United to a rally in Glasgow. Other groups such as Common Cause and Democracy for Scotland added their ideas to the campaign.

Not long after Tony Blair became Labour leader, he caused fury and accusations of betrayal when he insisted that no legislation on a Scottish Parliament would take place without a referendum. More difficult to accept was a separate second question about giving the parliament tax varying powers. However, after the victory in 1997 election and the wipe-out of the Tories in Scotland, it brought about an unusual phenomenon in Scottish politics – Labour, Liberals and the SNP agreed on a joint campaign to for a ‘yes’ vote on both questions.

The extent of the victory – 74.3% for the parliament and 63.5% for tax varying powers – surprised most observers. But it was a lesson on what a united approach could deliver. Other lessons the long campaign taught us was the power of groups like Scottish Labour Action to shift thinking within a major party. And the grassroots, cross-party Campaign for a Scottish Assembly (later Parliament) showed what a few doggedly determined people can achieve if persistent.

Pat Kelly was a member of the group which drafted ‘A Claim of Right for Scotland’. He is the convenor of the editorial committee of Scottish Left Review.

Stalled and stymied? The right to informed democracy in Scotland