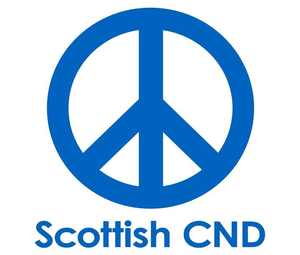 Arthur West makes the case for a non-nuclear future ahead of the Scottish Parliament elections.

During the Covid 19 crisis Scottish CND (SCND) and the wider peace movement have been organising online meetings and discussions. During these, activists have expressed the view that the crisis has probably resulted in the case for abolishing nuclear weapons and not renewing Trident becoming even stronger. This was because the last few months have illustrated how useless nuclear weapons are in dealing with threats such as a pandemic.

Prior to the lockdown, SCND ran the ‘People not Trident’ campaign. It main demands were an end to austerity policies and the scrapping of Trident. Campaign materials illustrated how the money used to maintain the current Trident system and the huge sums earmarked for its replacement could be better spent in other areas. One of these was health. During the Covid 19 crisis, it became clear that years of cuts to the NHS and other public services presented major difficulties in responding to the crisis.

Given the threats to peace and stability in the world today, it is crucial that SCND and the wider Scottish peace movement emerge from the crisis ready to continue the struggle for a peaceful world. As a contribution towards the struggle for a nuclear weapons free world, the SCND Trade Union Network will be highlighting the following five good reasons for scrapping Trident and not renewing it

Major Patrick Cordingley, leader of the British Forces in the First Gulf War, argued: ‘Strategic nuclear weapons have no military use. It would seem the Government wishes to replace Trident simply to remain a nuclear power alongside the four other permanent members of the UN Security Council. This is misguided and flies in the face of public opinion – we have more to offer than nuclear weapons’.

• Nuclear weapons are useless in dealing with cyber-terrorism

The last national security risk assessment carried out by the government identified cyber terrorism as a tier 1 security threat. Quaker peace activist, Tim Wallis, pointed out in his The Truth about Trident book, former Defence Minister, Des Browne, claimed in 2015 that Trident could be vulnerable to cyber-attack based on evidence he had received from an US Department of Defence report. Wallis also said this report warned that the US and its allies could not be confident that their defence systems would be able to survive a concerted attack from a sophisticated opponent such like Russia or China.

Nuclear weapons today are at least five times more powerful than those dropped on Hiroshima and Nagasaki. They have a capacity for irreversible and global destruction of innocent victims and can cause irredeemable poisoning of land. Medact, the campaigning organisation for health professionals has said: ‘Unlike natural disasters, the consequence of nuclear weapons use would include lethal harm from radiation and climate disruption to millions of people who are not party to the conflicts in which they are used’.

• Nuclear weapons are illegal and immoral

International humanitarian law forbids indiscriminate attacks on civilians. Treaties are supposed to be binding on states that sign them. The Treaty on the Non-Proliferation of Nuclear Weapons already prevents those who sign it from developing new nuclear weapons and commits states in possession to disarm as soon as possible. Another treaty called the Treaty to Prohibit Nuclear Weapons, more commonly known as the Global Ban Treaty, was passed at a special session of the United Nations in 2017. It forbids countries to possess, use, threaten or assist other countries to develop nuclear weapons. Now, 50 countries had ratified this important treaty so it has passed into international law.

One of the ways to make progress is to set up an adequately staffed and resourced Scottish Defence Diversification Agency. In 2016, a Jimmy Reid Foundation report made a compelling case against Trident renewal: it showed that only 600 civilian jobs are related to the existing Trident system at Faslane. Annual running costs of Trident are between £2bn-£3bn and renewal will cost £205bn.
This is money which could be used to decommission Trident, retrain workers and develop jobs in areas such as health, housing, education and social services.

In the run up to the 2021 Scottish Parliamentary elections, it will as always be important to raise nuclear weapons related issues. SCND Trade Union Network will be presenting these ‘5 Good Reasons’ to candidates during the campaign and asking if they agree with them. We will also be asking for electors to vote for candidates and parties who are in favour of scrapping Trident and not renewing it. There is confidence in the Scottish peace movement that parties in favour of scrapping Trident will gain voter support for this. We also hope Scottish Labour will highlight its policy of opposition to Trident replacement as agreed at its party conference in 2015 – but this will require Scottish Labour to distance itself from British Labour’s support for renewing Trident under the Starmer.