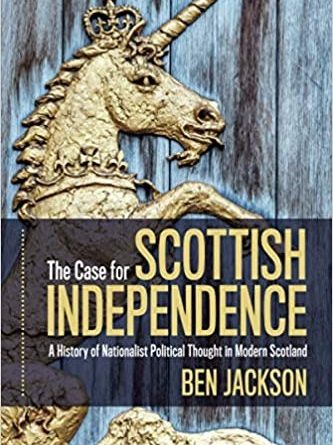 The intellectual case for Scottish Independence and how it evolved over the past 50 years is the subject of this new book from Cambridge University Press. It claims somewhat arrestingly that ‘The pages of New Left Review might seem an unlikely location for the intellectual origins of modern Scottish nationalism, yet this journal of rigorous Marxist analysis has a good claim to such a title. In the 1960s writings of Perry Anderson and Tom Nairn, lie some of the foundational assumptions of later Scottish nationalist rhetoric’.

‘It is striking’ says author Ben Jackson, Associate Professor of Modern History at University College Oxford, ‘how the work of a few independence supporting intellectuals has recast the terms of Scottish political debate since the 1960s’. Among the intellectuals Jackson cites are Neil McCormick, Tom Nairn, Neal Ascherson, Christopher Harvie and Stephen Maxwell. Nairn in particular is seen as pivotal. His journey from Marxism to populist nationalism centres much of this study. More than 20 pages are devoted to his journey from Gramsci to the SNP, beginning with his critique of the innate conservatism of ‘Labourism’ in Britain and highlighted initially by his New Left Review comrade, Ralph Miliband. Nairn took up Miliband’s theme insisting Labour was no threat to the British state nor would it ever herald the changes necessary to arrest the decline of British capitalism. That could only happen, Nairn insisted, in the ‘The Scottish Question’, ‘through a political break: a disruption at the level of the UK state – allowing the emergence of sharper antagonisms and a will to reform the old order root and branch’.

Nairn was also unimpressed in 1968 with the prevailing attitudes of Scottish nationalism: ‘This evil melange of decrepit Presbyterians and imperialist thuggery, whose spirit appears to be solidly represented in the SNP … This rough-hewn sadism will surely be present in whatever junta of corporal-punishers and Kirk-going cheese-parers Mrs Ewing might preside over in Edinburgh’. He dismissed the SNP as bland bourgeois nationalists similar to those found elsewhere around the globe: ‘After all when the going was good for imperialism, the world heard very little indeed for the Scots’ longing for independence.’

Yet by the early 1970s, Nairn’s opposition had ‘pared’. He said his ‘support for Scottish independence was on balance worthwhile since it would be a powerful blow against the British state. But it would only be through the creation of a better, socialist Scottish nationalism that the true emancipation could be achieved’. Scottish nationalism he further argued ‘necessarily combined progressive and regressive elements and it could not be assumed a priori that in an independent Scotland the Left would become a hegemonic force.’

By the late 1970s, Nairn’s nationalism had begun to eclipse his socialism. ‘With his perceptible loss of faith in socialism and the working class he put Marx to one side in favour of bourgeois republicanism’, claims Jackson. Meanwhile Ray Burnett in his timeless 1974 essay, ‘Socialists and the SNP’, argued: ‘The basic strategic question is whether the politics of Scottish nationalism represented a distraction from socialist objectives or on the contrary the means by which socialism might be advanced in these isles’. These deepening political divisions on the question manifested themselves in ‘The 79 Group’ split. Under the influence of Alex Salmond, Margo Macdonald, Maxwell, Ascherson and Nairn they sought to position the SNP overtly on the left. But Salmond ‘by some distance the most important politician to advance Independence in modern Scottish history’ insists Jackson, soon abandoned his support for social democracy and moved right advocating low taxes for corporations and lauding the ‘Celtic Tiger’ model employed in Eire. ‘Scotland must seek a competitive edge for its economic model’ he said ‘by reducing business taxes to entice international investment’, echoing both Thatcher and Blair.

As Jackson points out the SNP has gone further in recent years in advocating this case for ‘international competitiveness’. Mike Russell and Andrew Wilson, the high priests of the SNP centre right, took their cue to argue for ‘economic freedom’ for business ‘to reduce the size of government in our country’. According to Mike Russell in Grasping the Thistle (2006): ‘The UK was depressing private sector enterprise and growth in Scotland both argued attesting: ‘We are no longer fans of a wider application of the principle of universality’.

The modern SNP now employs populist rhetoric underpinned by such centre right economics, argues Jackson, pointing out that the late, Stephen Maxwell, saw the writing on the wall in 2000: ‘Over the last decade’ Maxwell wrote ‘as the SNP’s heart has become more attached to social democracy, its economic head has inclined to neo-liberalism’. For Jackson, managing the tensions between neo-liberal economics and social democracy is the central challenge facing Nicola Sturgeon today in finding ‘an artful combination for the purposes of building a diverse coalition of political support for the SNP.’ As for the case for Left-wing nationalism advocated by Nairn in 1970, Maxwell concluded 40 years later the SNP ‘no longer argue that a more radical socialist option was the likely outcome of a new Scottish state because the support of business and Scotland’s middle class would inhibit the eradication of poverty and inequality’.

Nowadays, ‘Independence is about delivering social justice with enterprise as two sides of the same coin’ claims Nicola Sturgeon. But such political sophistry means, when all is said and done, the SNP’s loyalties ultimately lie with those who retain economic and political power over the Scottish people – in other words the very class Tom Nairn and others set out to depose back in 1968!