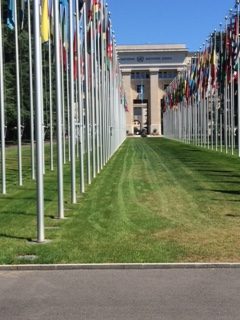 In November 2016, the Colombian government and the FARC, the country’s largest guerrilla group, signed a final peace deal. After more than half a century of conflict, the agreement was celebrated internationally as the end of the Western hemisphere’s longest war. Despite the momentous achievement of reaching a deal, any simplistic celebration of the ‘end’ of the Colombian conflict belies the fact that the signing of the agreement was only the start of a long process of implementation, reconstruction and reconciliation. One year on from the signing, how has the peace process fared in its first year of implementation?

At the end of August 2017, the FARC – who took up arms against the Colombian state in 1964 – officially announced their conversion into a political party. This transformative moment in the country’s history was marked by a concert, attended by thousands, in the country’s political heart, Bogotá’s Bolivar Square. The new party has now registered to participate in the upcoming 2018 elections and according to the terms of the peace agreement will be guaranteed ten seats in the Colombian Congress from 2018 to 2026. Significantly, the new party’s name maintains the Spanish acronym of the insurgent group – transforming the Revolutionary Armed Forces of Colombia into the Common Alternative Revolutionary Force – demonstrating an ongoing commitment to their revolutionary past and principles of social justice.

The creation of the new party came after a months-long process in which the FARC moved their more than 7,000 troops into special zones for the laying down of arms. This phase of the implementation was finalised in August when the UN, which was overseeing the demobilisation process, announced they had received more than 8,000 arms from the FARC. Crucially, more arms were handed over than registered guerrilla fighters, providing a marked comparison with the 2003-2007 demobilisation of right-wing paramilitary groups when just over 18,000 arms were handed over for more than 31,000 fighters.

Whilst such developments demonstrate the strong commitment of the FARC to peace, since the beginning of the implementation process there have been concerns about the Colombian state’s ability and willingness to fulfil their obligations under the peace agreement. In spring 2017, the head of the UN mission in Colombia, Jean Arnault, criticised the ‘slow pace’ of the Colombian authorities, in particular their failure to finish the special zones in time for the arrival of FARC troops and the inadequate provision of food supplies and medical services. Post-demobilisation the zones were intended to become spaces for the reintegration of former combatants into civilian life. However, ex-combatants in the zones are currently in limbo, as the government has failed to implement the reintegration plan. The National Ombudsman, on a recent humanitarian visit to the 26 zones, reported terrible living conditions and security fears, which has led to some FARC members leaving the zones.

Likewise, the implementation of the ambitious peace agreement, which not only sets out a road map to end the conflict but covers crucial areas such as rural reform, political participation, drugs and victims’ rights, has suffered serious setbacks in the Colombian Congress. Implementation requires a number of important legislative reforms and only about 20% of these normative changes have been passed in a Congress that includes a powerful group opposed to the peace agreement and where President Santos, whose term comes to an end in 2018, is struggling to mobilise support. Two essential laws that need to be passed include the political reform bill and the statutory law for the special justice system that will prosecute crimes committed by both FARC and Colombian security forces during the conflict as well as create other transitional justice mechanisms that are essential for the country to reconcile its traumatic past. With the 2018 elections fast approaching and uncertainty the presidency will be won by a pro-peace candidate, it is crucial that Congress pass the necessary legislation to fulfil what was agreed in the Havana negotiations.

Thanks to the peace process, Colombia has registered its lowest levels of violence in forty years. Yet targeted assassinations of political activists and human rights defenders have increased since the signing of the peace deal. Human rights groups report that at least 100 activists have been assassinated this year, the majority in rural areas vacated by the FARC – where there is a political vacuum that state forces have not filled – and paramilitary groups continue to be active in the country. On 5 October, the repressive face of the Colombian state was shown when security forces killed nine peasant farmers in Tumaco, who were protesting against forced coca eradication in the area, which violates the crop substitution programmes outlined in the peace agreement.

Despite these attacks, activists and social movements continue to mobilise in support of peace and for the implementation of the FARC peace deal, which for many represents the best chance to build peace with social justice in the country. In September, the announcement of a formal ceasefire between the government and a second guerrilla group, the ELN, symbolised another step towards securing the end of Colombia’s complex and multi-faceted conflict. However, unless the Colombian state can fulfil the promises made in the Havana agreements, there is concern about the long-term implementation of peace in the country.

Cherilyn Elston is a lecturer in Latin American Studies at the University of Reading. She was formerly the Programme Assistant for Justice for Colombia.