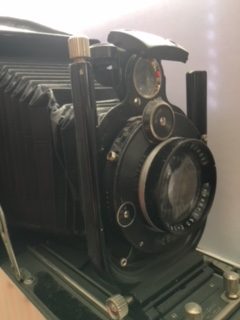 The Eyes of Orson Welles (2018), written and directed by Mark Cousins

Mark Cousins’ personally spoken, second-person narrative throughout The Eyes of Orson Welles casts a conversational spell which conjoins his audience and subject. A full-screen-sized black and white photograph of Welles in repose is intermittently shown, evidently to suggest that he is somehow listening. This image intersperses still and animated studies of the contents of a precious box of Welles’ private art; close-seeming soundscapes; film clips, which are given pseudo psycho-analytic treatment – points are often made about Welles’ psyche rather than his fame. ‘I hate to do this to you, Orson’ later forewarns Cousins’ incarnation about his documentary’s perceptual inquiry.

Pre-film-screening, Cousins invites his audience in person to share his live phone conversation with Beatrice Welles, Orson’s daughter. We hear her tell the film historian that this is the best documentary about her father that she has seen. We are invited by Cousins to applaud reassuringly, in capacious throng.

Appearing to replace former clichés about Welles’ body of work, The Eyes of Orson Welles freshly reveals elements of its subject’s lifelong ability in observing the world – his ‘looking life’. The rediscovered box of Welles’ paintings and drawings is central to showing and talking about rarer aspects of his life. This art archive, to which Cousins’ film audiences are made privy, was accessed through his contemporary, Michael Moore: post-screening news to this attentive audience. Said by some critics to be ‘pretentious’, Cousins’ cinematic in-crowd revelations seem impressive; his left-wing connections trusting and facilitative.

Widely acknowledged as a true legend in cinematic history, Welles’ relationships were often publicised – Cousins alternately confronts, discusses and concludes on this subject with a dose of cryptic, conversational cynicism. To exemplify Welles’ own flaws, he draws mythological comparisons and allusions to chivalrous characters like Don Quixote and to authority figures like Macbeth. This unusual juxtaposition reveals darkness and light in Welles’ more private life: he evidently understood human conditions of lust, power and addiction rather well.

Possibly forgotten or unseen philanthropic attributes which Welles possessed are also examined in the film. Particularly, his scrutiny in painting and sketching working people in Ireland and Europe; his borrowing of imagery from Eastern European and Slavic films; his dramatic use of dark and light ‘lines and calligraphy’ in his work; his humanistic psychology of emotion; his sincerity in publically speaking out about corruption and injustice.

Early in the film, Cousins rhetorically asks Welles how he would have used the ‘dark magic’ of the internet. Recent photographs of New York are accompanied by the brief explanation to Welles that ‘the twin towers are no more’. Esoteric themes of tragedy and curiosity, of light and dark, of then and now thus consistently recur. One of several ripostes – or quotes – to Cousins, cleverly sourced from Welles’ original writings, is spoken towards the end of the film. He declares ‘I was a satirist’ through an actor’s impression; he also appears to point out that Cousins missed the humour of his work.

During the last third of his documentary, Cousins’ narrative device changes from letter-reading to categorising and lecturing. Reviewing through more elliptical interpretations, he avoids simply regurgitating epithets from the past which affirmed Orson Welles’ legendary status. It is a fact which needs no repetition that, since its release in 1941, Citizen Kane has been critically lauded as one of the greatest movies ever; The Third Man, released in 1949, has moreover been consistently acclaimed as the ‘perfect’ movie.

The Eyes of Orson Welles enables us to get a bit closer to the creative and human spirit of its titular titan. The sheer stature of this actor and director can never be forgotten. Nevertheless, talking both inside and outside of his documentary, Cousins conveys his understanding of his subject as a complex figure whose socialist, industrialist and romantic interests were subsumed by his films. It may be for another time or another film-maker to postulate how Welles would rise up creatively, probably in majestic protest, against certain American Republicans, were he alive today.

This documentary about Orson Welles is fascinating in its familiar and playful yet technical approach to finding the man behind the acclaimed work. According to Cousins, Welles left more than an autobiography for people to read and see. This extended letter to a man who, in its writer’s view, was one of the great iconographers of the 20th century purveys distinctive, interesting bulletins, through its author’s narrative consistency of poetic Irish soul, mischievous curiosity and droll scepticism.