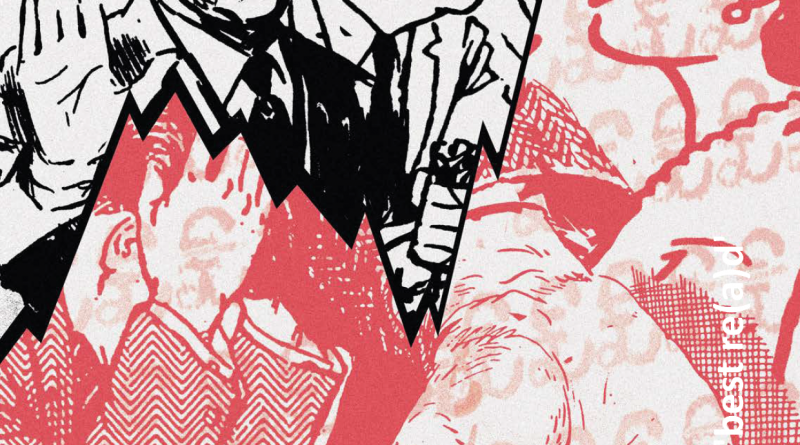 The hope of humanity?

There is a relatively well-known saying on the left that ‘the cause of labour is the hope of the world’. It is one which the left-wing magazine, Tribune, for example, continues to promote. Labour here is not the Labour Party but workers whose labour creates the wealth of the world but who never receive anything approximating to its fair share of that wealth. Walter Crane in 1894 created the illustration of the ‘The Workers’ Maypole’ for the socialist newspaper, Justice, from which the dictum is derived. Amongst the demands adorning the maypole are ‘socialisation’, ‘solidarity’ and ‘humanity’. These are expressed in the aforementioned saying along with another one on the maypole being ‘the hope of labour is the welfare of all’.

More than one hundred and twenty-five years on from then – and certainly from the founding of the STUC in 1897 and which, thus, celebrates its 125th anniversary this year – Crane’s proclamation still seems significantly true in two senses. First, that labour is the hope of humanity. And, second, it is not Labour that is the hope of humanity. On the occasion of the STUC’s 125th congress in Aberdeen at the end of April, this editorial examines the veracity of the latter contention first.

Labour in Scotland and Britain is a party which is no longer social democratic. ‘New’ Labour was the death knell to any social democratic aspiration and it was not rescued or resuscitated by Corbyn. The highpoint of social democratic action by Labour in office was the 1945-1950 Attlee-led Labour government. Its actions led to the creation of the NHS, modern welfare state, widespread public ownership and so on. Some of its acts were relatively uncontroversial given that the popular mood had swung in a leftward direction and there was consensus from across the political spectrum (including many Tories) that the state needed to intervene in the economy to resuscitate British capitalism. But there were limits to these progressive actions such as resistance to demands for an end to British imperialism and development of nuclear weapons.

Nonetheless, Labour was willing to use the state to intervene in the market’s processes to alter its outcomes for progressive ends. Looking at the policies of Starmer and Sarwar, this is no longer true. Whilst both may advocate state intervention on occasion, it is not with socialising the means of production, distribution and exchange in mind (and which continue to be in the control of private ownership). Like Blair and Brown before them, both Starmer and Sarwar are in favour of making capitalism more efficient (by using the state) in order to pay for social provision. It means the foundation of society continues to be fundamentally unequal and, where there is any benefit to be had, it is through piecemeal amelioration.

Quintessentially, this makes Starmer and Sarwar no different from Sturgeon, Swinney and the SNP. When we look outside of Labour and the SNP, neither the Scottish Greens nor Alba seem to offer something substantially and progressively different. For the Greens, they seem to have at this stage given up a lot to be in government with little evidence of much in the way of return – see Stella Rooney’s article in this issue. Others may say that even if the Greens and Alba did offer something substantially different, both are too small to make a positive difference. At a time when the 10% richest in Scotland are 200 times better off than the 10% poorest in Scotland, this shows up the poverty of political ambition of these mainstream parties.

The highpoint of the radical left in Scotland has long since dissipated. After the splitting of the Scottish Socialist Party (SSP) in 2006 by Tommy Sheridan forming Solidarity, Solidarity has now deregistered itself as a political party and now operates as a network within Alba. Meantime, the SSP has not been able to regain its prominence, with RISE folding after its failure to make a breakthrough in 2016. Other continuing left offerings like the Scottish Trade Union and Socialist Coalition (STUSC) have not managed to create any lift-off for themselves.

So, the political parties of the centre-left and left in Scotland offer very little of worth to address the multi-faceted crisis of contemporary capitalism. We do not have the glimmers of hope that a radical left offers (or did offer) in the likes of small states like Belgium, Denmark and Portugal. Therefore, this brings us back to labour and the second contention that labour is the hope for humanity. This is not to suggest a form of syndicalism, whether formal politics is eschewed. Rather, it is to suggest that political parties and governments can be influenced from without if unions are organised in a united, powerful and effective way.

That would seem to require a coherent and comprehensive strategy based upon mobilisation of members and resources – and which is much more multi-faceted than simply calling for a general strike (though that would have its place too). In response to the emerging cost of living crisis, it is easy to call for mass mobilisation – or as Roz Foyer, STUC general secretary did in the Sunday Herald (23 January 2022): ‘We need to build a big, bad, angry movement for change. Working-class people have more power than they dare imagine and we need to start exercising it’. It is, however, one thing to have the ambition and quite another to have the capability to do so.

Such calls for resistance were made by many when the Con-Dem coalition in 2010 began its introduction of austerity. Very little effective resistance materialised. Why should this time round be any different? The protests called by the People’s Assembly Scotland on 12 February in Aberdeen, Dundee, Edinburgh and Glasgow were not auspicious starts if their size is any barometer. We can’t let console ourselves with ‘the weather wasn’t good’.

The hope is that the cost-of-living crisis will affect more people more sharply and more detrimentally and at the same time. Austerity involved different groups of people – but not all people outside the wealthy and power- being affected in different ways and at different times depending on what services they needed to access. Now, the situation may be different as rising inflation with stagnating wages produced a more generalised effect of declining real wages. But this is not to say the worse it gets, the better it gets because there is not automatic or mechanical response to declining living standards. Added to this is the sense that a government of toffs for toffs is in crisis, meaning a hated enemy is seen as weakened, thus, making resistance seem more worthwhile.

So, this is where the unions come in, starting with the STUC and its 550,000 members through its affiliates. This, many would think, is already a movement and a fairly big one at that. But it is a passive actor until it is not. It is the challenge for the left to find ways to motivate and mobilise these members (and their families and friends) in alliance with like-minded allies (anti-poverty campaigners, the left and the like).

The last time round that unions successfully rose to this challenge was the early 1970s but they did so from a much higher base. Fifty years ago, the miners broke through the Tory government’s pay policy with mass, militant action. Saltley Gates on 10 February 1972 was the clincher.

So, labour can be the hope of humanity again but it will not be easy. Indeed, we did not turn Saltley in Orgreave in the miners’ strike of 1984-1985. We know that the sources of workers’ power and influence are associational (collectivising through organisations like unions), structural (being capable of causing disruption at key points in the system of production, distribution and exchange), coalitional (through alliance building with others), institutional (within the institutions of government and state regulation) and discursive (by framing narratives). Yet going about creating them is another task entirely. Scottish Left Review would welcome thoughts on how such working-class power can be reimagined and regenerated. And, of course, if there is hope for the left making advances in any of these aforementioned parties, then also please give us your thoughts here including what role unions have to play in doing so.

Ukraine
We will carry full analysis of the situation in the next Scottish Left Review issue as restrictions on space prevent us from doing so in this issue. Suffice it to say here, we are glad to see much of the left has not only condemned the Russian invasion but in going beyond the platitudes of ‘no war but the class war’ and ‘a plague on both your houses’ has also avoided the position of ‘my enemy’s enemy is my friend’ by making two key points. First, the Russian state’s actions are part of continuing imperialist rivalries, where NATO has expanded eastwards. This does not justify the invasion but it does in part help explain it. Second, these imperialist actions can only further threaten the interests of workers, humanity and the environment, whether in Ukraine, Russia or elsewhere. These imperialist actions constitute moves to secure strategic assets to protect the interests of the various ruling classes in each country. We applaud the brave anti-war protestors in Russia as well as the courageous citizens defending themselves in Ukraine. We must hope that Russian troops become mutinous as a result of demoralisation due to their poor treatment and disagreement with Putin’s plan. Readers can support unions outside Ukraine helping unions in Ukraine help workers in Ukraine by donating at https://petitions.ituc-csi.org/support-ukraine?lang=en

Anniversaries abound and celebrations continue
First of all, many happy returns to the STUC on its 125th birthday. The spring and summer hold other important anniversaries, whether they be Workers’ Memorial Day on 28 April 2022, the fiftieth anniversary of Jimmy Reid’s rectorial address at the University of Glasgow on 28 April 1972 (see https://www.gla.ac.uk/media/Media_167194_smxx.pdf for the text of the full address) and the aforementioned Saltley Gates. Of course, May Day follows soon afterwards. The earliest date in this diet is International Women’s Day on 8 March. We are glad that in this issue of Scottish Left Review we have a majority of women contributors. Our sister organisation, the Jimmy Reid Foundation, held a successful virtual meeting on advancing the rights of women in unions with women leaders of the STUC, UNISON and Wales TUC on 2 March. We are grateful to Lilian Macer stepping in to replace Christina McAnea at the last minute.

Welcome to Derek McKechnie
Our new cover designer is Derek McKechnie. Derek is a graduate of the Gray’s School of Art at Robert Gordon University in Aberdeen. He previously contributed a graphic commemorating the UCS work-in for the back cover of the Scottish Left Review (May/June 2021). We look forward to other striking cover designs from him. His website is https://www.derekmckechnie.com/ and he can be contacted at Derekmc90@icloud.com

May local elections
We have two articles on the forthcoming local government elections by James Mitchell and Ellie Harrison on 5 May plus a range of contributions from candidates standing for election and looking to attract your vote. The article from those on the left in Scottish Labour did not materialise.