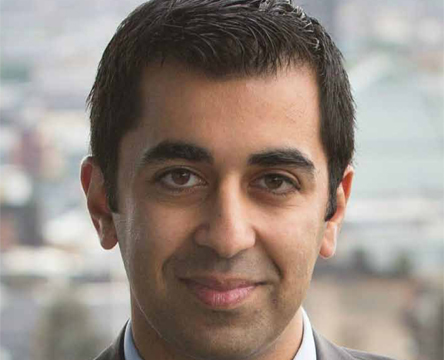 My support for independence comes from a belief that decisions about Scotland should be made by the people who care most about Scotland – that is the people who live here. In areas where Westminster still retains power over policy decisions, such as immigration, asylum and citizenship, the difference in tone and approach between the UK and Scottish Government is becoming increasingly clear, and Scotland is being dragged down a route that is not best suited to our needs or to our attitudes towards immigration and asylum.

The UK Government’s immigration and asylum policy increasingly appears to be led by trying to ‘kowtow’ to an agenda driven by UKIP and elements of a hostile media. At the beginning of this year there was a huge media and political hype on the potential flood or influx of migrants from Bulgaria and Romania following these country’s citizens gaining the same rights to work in the UK as other EU citizens. However this hysteria was shown to be unfounded, as the predicted ‘flood’ turned out only to be an estimated trickle of under 30 people coming to the UK. The language used to describe the potential arrival of new migrants from Romania and Bulgaria had the potential to heighten or inflame tensions between communities, which was irresponsible of politicians and the press alike.

The difference in tone and approach between the UK and Scottish Government is becoming increasingly clear, and Scotland is being dragged down a route that is not best suited to our needs or to our attitudes towards immigration and asylum

In stark contrast, the Scottish Government has put forward inclusive and humane policies for immigration and asylum in an independent Scotland. We already do things differently in Scotland from the rest of the UK – here we recognise the skills asylum seekers bring and the contribution they can make to our society, and make an effort to help them to integrate with the rest of the community from day one as opposed to waiting years until their status settled and their fate sealed.

The Scottish Government’s White Paper has set out our pragmatic, practical policies for an independent Scotland, based on Scotland’s needs, interests but also our values. Rather than having an unwelcoming attitude to refugees and asylum seekers, an independent Scotland would offer a more inclusive approach, where individuals are integrated into the community from the first day they are in Scotland, rather than once their application is approved – which can take years under the current system. We will also enable asylum seekers to work while waiting for a decision on their application, to allow them to share their skills which could benefit Scotland and contribute to society through their experiences. It defies logic to prevent asylum seekers the opportunity to work and contribute to local services by paying tax when they want to.

Scotland has already shown itself to be compassionate and welcoming towards those fleeing persecution and conflict, and an independent Scotland would continue this sentiment by ending inhumane practices such as dawn raids, where children are dragged out of their beds and families forced out of their homes, and closing Dungavel detention centre to ensure that no asylum seeking child or their families are detained on our soil.

An independent Scotland will have an inclusive approach to citizenship. We will allow citizens of any country who have spent at least ten years living in Scotland at any time and who have an on-going connection with Scotland to apply for naturalisation as a Scottish citizen. Furthermore, people will be able to claim Scottish citizenship not just going back to their parents heritage but also their grandparents – a truly inclusive model.

Powers over immigration policy would allow an independent Scotland to attract talent from overseas and to meet the needs of Scottish society with greater flexibility. The current UK Government is damaging our valuable universities and college sector by making it extremely difficult for students from some countries to come to study in Scotland and the rest of the UK; in an independent Scotland we could reintroduce student visas removed by Westminster to encourage talented people from around the world to choose Scotland as their place of study. We will also reintroduce the post-study work visa, which was abolished by Westminster in April 2012.

Even with independence Scotland will still face the challenge of racism and bigotry – like any normal nation does. We will continue to stand up and reject racists who come to peddle their filth on our streets. In the past I have been heartened to see that when the SDL have organised demonstrations in places such as the South Side of Glasgow, residents and others have come together to create larger counter-demonstrations to show these bigots and racists they are not welcome and they do not speak in our name. I am sure that Scotland will continue to welcome people from all walks of life and be proud of the rich diversity that reflects our country’s multiculturalism.

In Glasgow, the city I represent in the Scottish Parliament, there are many reminders of Scotland’s role in the UK’s dark past throughout the city. However, I see the 2014 Commonwealth Games as a chance for us to learn lessons from our past, and look forward to a new relationship with the Commonwealth, which includes a large proportion of African and Caribbean countries.

This new relationship will be built on partnership and collaboration, rather than a relationship where one country is superior to the others.

The cultural programme which will run alongside the sporting element of the Commonwealth Games will explore Glasgow and Scotland’s involvement with the North Atlantic Slave trade through the Empire Café. The café, based in Glasgow’s Merchant City, will host debates, readings, films, workshops and art installations on the theme of Scotland and slavery. I hope that by acknowledging this part of our history, Glasgow’s Commonwealth Games will allow us to move towards a more positive future and a relationship with Commonwealth countries which is a partnership of equals.

Last year the world lost a father in Nelson Mandela – a towering statesman and an inspiration to the entire human race. However his legacy will live on, and I know that here in Scotland we will continue to campaign for equality, to fight against persecution and to stand up those who need protected.