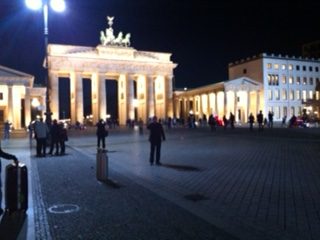 Victor Grossman argues much was lost and not much gained by East Germans under the new Germany.

Despite being the thirty-year anniversary of German unification, this year’s 3rd October speeches seemed more restrained, without balloons, laser shows and packed auditoriums. The blame lay largely on the virus but also reflected fears about the economy, the environment, the EU and eastern Germany. I thought back to that fateful autumn in 1989 when people in Leipzig poured into streets to voice anger at shortages, a scarcity of fashionable, modern goods, restrictions on western travel, misleading reports on the economy, falsified electoral results and the weakness of a new leadership.

Then standing in Leipzig’s main square in late November 1989 and reflecting on the choruses of ‘We are the people’, I noticed threatening-looking young men shouting instead, ‘We are one people’, a clear call to join West Germany and terminate the GDR. Later, I saw similar young men unloading bundles of leaflets from a van with a West German licence plate. Within two weeks, I read of attacks by young men in Leipzig on students carrying a GDR flag and against a Somalian woman student.

Until then I think that many, while demanding changes, improvements and new leaders they could trust, did not wish to give up the GDR. But in the tumultuous months which led up to the decisive 18 March election, a powerful, highly experienced, well-financed campaign by Westerners, headed by Helmut Kohl, had its effect. While calling movingly for freedom and democracy, their undertone offered other prizes: Hershey bars, Cokes and Big Whoppers as well as hitherto scarce bananas and oranges, Opels, VWs, maybe Mercedes, foreign travel and the key to all such delights, the ‘West (Deutsch) Mark’. When Kohl promised a quick realisation of this dream, it brought election victory to his Christian Democratic Union. A big majority in the East German parliament approved unification for 3rd October, while the successor to the GDR’s leading party, despite its pledge to abandon all traces of ‘Stalinism’ and which received only 16% in the election, stood almost alone in opposing unification. Those promised delights did become available. Many are doubtless happy with them. But jubilant East Germans soon discovered that the magic marks (and later euros) must somehow be earned. No easy matter; within three years the entire GDR economy was closed down.

Despite distortion, it had much to be proud of. Built up without millions based on wartime slave-labour, or Marshall Plan aid, but paying over 90% of war reparations, possessing almost no resources beside crumbly lignite coal, it had created a broad industrial base, a product of gritty sacrifice and dedication without profits being pilfered. But in the 1980s, confronted by the need to build an electronics industry with no aid from Sony, IBM or the USSR, a mounting military threat, and engaged in a giant effort to provide cheap, modern housing for everyone, it could not match super-wealthy West Germany, especially in its consumer goods sector. This, plus some planning missteps, lay behind most difficulties and dissatisfaction leading to 3 October.

The price paid was a heavy one. Not only were small out-dated factories shut down, often a town’s main basis, but also modern industrial ‘Kombinats’ producing top-quality goods, the centres of whole new communities, were taken over for a song by former rivals. Some became low-wage adjuncts making parts; a high proportion were purchased by speculators, West German or foreign, who dismantled the machinery and let the buildings rust away. Almost all the 8,400 publicly-owned enterprises were eradicated; millions were thrown out of work.

Soon West Germans seized every administrative job, from waterworks to sewage control, traffic planning, law courts and police officialdom. For their sacrifice in moving to the ‘Wild East’, they received a so-called ‘bush bonus’. Universities and scientific institutes were cleansed by mass firing exceeding that by Hitler against Jewish intelligentsia. Newspaper, magazine, radio and TV staffs were replaced by Western journalists, and every positive mention of GDR life was tabooed.

There had been many positive features. Workers were secure in their jobs. Even when a pit ran out of coal, or a factory moved, all were guaranteed new jobs. Evictions were legally outlawed. Unchangeable rents cost less than 10-15% of income. I never saw one person sleeping in the street – or begging. One tax covered all medical and dental expenses, prescription drugs, four-week rehab trips, six months paid maternity leave, free abortions, child care and summer camps, three-week holidays at lakes, mountains or beach for thirty marks – and much more. The cultural scene was also hit hard; cheap books, theatre and opera seats became sad memories, libraries and youth clubs were defunded.

Worst of all, the evil giants returned; the Deutsche Bank, Hitler’s financier, Krupp, Siemens, Auschwitz-profiteers Bayer and BASF, the producers of Hitler’s tanks, bombers and guns regained lost sites. The GDR had aided ANC and Algeria, Vietnam and Allende, Cuba and the Sandinistas; it represented a moral anti-pole to neo-colonial exploitation and expansion. After its demise a monolithic Germany, eager to build its military might and extend its power, joined unashamedly in bombing chemical plants and bridges in Serbia, sending soldiers to battle in Afghan mountains and Saharan deserts and heavy weapons to Near East aggressors.

And what is next? The GDR’s holiday military marches are constantly ridiculed. Yet today, almost every weekend in Germany, East and West, neo-Nazis march with banners, jackets and tattoos, frighteningly demanding a return to an earlier past! Will the approaching crisis strengthen them? October 3rd is praised as a democratic revolution – though somewhat less jubilantly this year. Is perhaps ‘counter-revolution’ more apt?

Defecting to the GDR in 1952, Victor Grossman writes the ‘Berlin Bulletins’ and his autobiographies are ‘Crossing the River, A Memoir of the American Left, the Cold War, and Life in East Germany’ (2003) and ‘A Socialist Defector: From Harvard to Karl-Marx-Allee’ (2019)