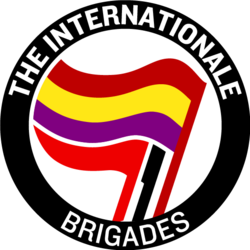 Graham Wallace explains the what Glasgow’s new memorial is all about.

The Glasgow Shipping branch of the RMT union recently hosted a gathering of local, national and international supporters at the unveiling of a plaque and statue on the banks of the Clyde at Broomielaw, in memory of the seafarers who ran vessels to break the blockades during the 1936-1939 Spanish Civil War. People came from all over Scotland, Britain and Europe to attend.

It is an international memorial to seafarers who left their home ports from all over the world to support and bring supplies to the Spanish people, who were fighting the fascist Franco. In Britain, they especially came from the ports of Cardiff, Liverpool and Glasgow. And the people of Glasgow played their part too. When the working class of the city didn’t have much, what little they could spare they used to help the Spanish people in the plight they faced.

We hope the memorial will be the catalyst for other memorials in these proud seafaring cities. It took us 15 years to complete, but the proudest thing about it is that it’s there for all us of forever, especially now at a time when the far right and fascism are on the rise again. So, it’s both a memorial and a warning for future generations.

Frank Casey, the sculptor who designed the plaque and memorial, is an old communist from Glasgow. About 15 years ago, he saw Harry Secombe on Songs of Praise interview an old captain in Greenock. When asked what his greatest achievement was, he declared it was running the blockades in the civil war. Frank took this on board, ran with it, and approached our Glasgow Shipping branch.

Of the 61 merchant vessels sunk between 1936-1939, 29 of them were flying the Red Ensign. Normally, such an action by a foreign power would be seen as an act of war, and be met with force, but such was the appeasement mood in the British government that they let it pass.

The plinth features a stanza from Herbert Peacock’s 1938 poem, A Ship for Spain:

‘I had a ship,’ the captain said,
‘A ship that sailed for Spain,
And if I had that ship right now
I’d sail there once again.
‘I’d take a story with me then
And let the people know
In Barcelona why their bread
Is fathoms deep below.
‘With my own lips I’d to them say:
The English people true
Want you to hold against a foe
But it’s more than the Government do.
‘Any fool with eyes could see
When the planes swept over low
They didn’t give a damn for the Union Jack
Spread-out across the bow.
‘And why don’t they care for the English flag
And the rules of the bloody game?
Because they know that Chamberlain
Has traded the English name.
‘Has traded the name to the Japanese,
Licked Mussolini’s boots,
Let Hitler get hold of the Austrian lands
For you doesn’t care two hoots.
‘We sent a wire when we got to land,
And in Parliament next day,
Franco’s lackey got up and said
We just went there for our pay.
‘These are the taunts we have to bear
From the traitors we’ve got at home.
From the traitors who sullied the English name
And played second fiddle to Rome.
‘I had a ship,’the captain said,
‘A ship that sailed for Spain,
And when I get another ship
I’ll sail there once again.’
Then, as now, and forever, no pasaran!

Graham Wallace is the branch secretary of the RMT Glasgow Shipping Branch.