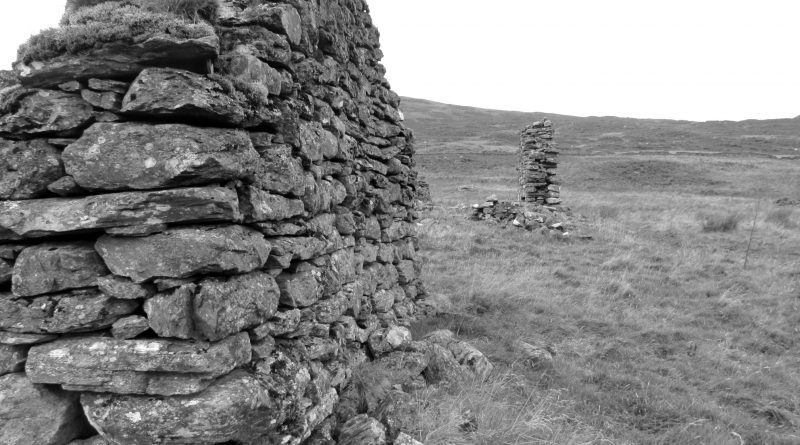 Patrick Phillips looks at the social aspects of anthropology and architecture of a lost village in Scotland.

On maps today, ruins are simply known as shielings. Without roofs, they cannot be considered as bothies either. A shieling is defined as ‘a mountain hut used as a shelter by shepherds‘, or from another perspective, ‘a summer pasture in the mountains‘. Some ruins are the ruins of villages. When you encounter such places, you can sense here was once a village and wondering what happened to reduce such spaces to shielings. How therefore did this Highland village become deserted? How long had the inhabitants lived here? For when you look at their homes, you begin to realise these people’s stories are invisible to us.

Yet, their stories are preserved around the stones of each wall they built because they are still standing, showing us how, in some way, they sustained the land, animals and themselves. It is not surprising that the Gaelic name given to this village is Tirai, meaning ‘land of joy’.

Knowing their stories more fully would mean living there, spending time sitting next to their homes, looking at how each home nestles into the landscape, where becoming intimate with the landscape is essential to knowing their struggles and joys.

The questions to be asked of them are: How happy were they? How did they see life? How did they see their future? Were their needs met? In the modern world, the quality of a person’s life is often measured by their mortality. But the actual quality of life in terms of experience and fulfilment may vary whether or not you have lived a short or a long life. So, the only way to measure the quality of a life is through people’s experience.

A census of 1871 recorded that ‘no one’ remained ‘living in Tirai’. And there are no other records of life existing there after that date. Tirai had come to an end. If we go back to trace the beginning of Tirai, the earliest and at present only record we have is the village being mentioned ‘in 1451 in the Exchequer Rolls of Scotland’, meaning that Tirai had lasted as a village for 420 years up until 1871.

In 1797, it was stated that ‘there are eleven families on the farm’ and that was ‘considered to be too many’. Yet, they had each other, there was the family unit, and the village itself, a family – not made up of separated fragments. It seems the collapse of the village was a gradual process – as opposed to a sudden, single event or crisis. Therefore, the end of Tirai, I believe, would have been made up of a series of critical events that would have led to its eventual collapse. An example of a critical event was ‘in 1807 farming became difficult with tenants unable to meet their rents’. Big landowners, with a desire to increase their profits, once again forced the tenants to abandon their livelihoods and their lives for the sake of profit.

The people of Tirai, therefore, did not voluntarily abandon their village: they were forced to do so. Indeed, the decision to abandon their village was not theirs for they could have continued to sustain their lives there by subsistence farming. The villagers were no longer considered by the landlords to be profitable because they could not meet the ‘increase in rents’, and yet as a village they had managed to survive for over four centuries. What the village of Tirai exemplifies is the effect of the profit motive which is in itself unsustainable, and persistently pushes out the needs of others. Where something is gained, elsewhere something is most definitely lost. In a new economic exchange without profit, the folk of Tirai would have been able to sustain itself and critically its culture too for well over 1,000 years.

Roles within the village were many – shepherd, ploughman, tack (carpenter), miller, general labourer, housekeeper and servant. Some of the inhabitants had to leave the village to earn a living as some of these job titles suggest. But before this transition, self-sufficient crofters were persistent in finding ways in which they could carve out their independent way of life in and around the village.

There was also a lime kiln based in the Tirai, which we could consider part of a micro-green industrial revolution. This suggests the villagers managed economic survival through their existing connection with nature, knowing that they could transform Glen Lochay into something of a serious commercial limestone quarry. But their little lime kiln suggests that they had no desire to exploit nature, only to sustain and make the most of what resources they had available to them.

Imagine if the village of Tirai could once again be brought back to life, becoming a Highland eco-village using renewable energy and sustainable agriculture methods so that life was made for living and not just existing.

Patrick Phillips is an eternal revolutionary, writer, artist and environmental guide (https://www.eternalmountaintourguide.co.uk/). He lives and works in a mountain village in Scotland. and has written articles for The Stage, Elsewhere Journal, CommonSpace, Freedom Press, Scottish Farmer and The National. In summer 2021, he published his first book of essays, Eternal Mountain: Essays from Afar. He is now working on his latest project to be published in 2023: The Modern Giant: How to Be A Giant In An Age of Neo Ontology.