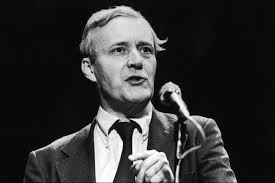 I first met Tony Benn in Manchester in 1980, when we were both addressing a huge rally in the Manchester Free Trade Hall in support of the steelworkers during their strike. I was somewhat nervous, and Tony’s immediate supportive ‘well done’ comment after I had spoken, stayed with me in the years to come. I moved back to Scotland in 1981, and worked with Tony with comrades in the Campaign Group in Scotland, and on the Labour Leadership campaign, co-ordinating meetings, visiting picket lines and factory occupations, and sharing platforms. We became good friends, and I took great pleasure in his infectious enthusiasm for life, combined with a strong interest in Scottish politics, in the history of women’s emancipation, in organising, and in encouraging others. We explored the new Scottish Parliament building together during construction, and I know that Tony was thrilled to be able to give the Time for Reflection contribution in the Scottish Parliament, on 19 March 2008.

It is not only memories of Tony with political meetings and campaigns, but also of meeting my family, and of sharing each stage of my son Iain’s life, now 19, as they enjoyed a mutual interest in technology, gadgets, and making little films.

I watched how Tony made time for so many people, despite failing health – responding to so many requests to speak, travelling up and down the country. October 2011 saw us walking through Glasgow on one of the wettest days ever, on the STUC People First demonstration. The weather was so bad that the STUC decision was taken to cancel all the speakers – except Tony – a decision that was very well received by all concerned!

There is so much to be shared and treasured, by all those who knew Tony and all who were encouraged by his words and actions.

Bringing traffic to a standstill, crowds gathered in Parliament Square on Thursday 27th March to join with family, friends and comrades at Tony Benn’s funeral, held in St Margaret’s Church, Westminster Abbey. I joined in the applause, tears, and song, as time was taken to reflect on Tony’s contribution to fighting for a better world. The Durham Miners banner took pride of place outside the Church, and the crowds and mourners reflected the breadth of campaigns, struggles and progressive causes to which Tony had contributed. The obituaries have recorded that Tony Benn served as Secretary of State for Industry, then for Energy, in Harold Wilson’s Cabinet; and that Tony stood against Dennis Healey in a contest for Labour’s Deputy Leadership in 1981, achieving 49.457% against Dennis Healey’s 50.426%. The media vilification of Tony Benn during the Deputy Leadership campaign in 1981, including harassment of his family, gives an indication of how seriously the establishment took that challenge from the left.

Tony’s contribution in supporting workers in struggle has been recorded too, as with the UCS and shipbuilding on the Clyde; the Miners’ strike 1984-85; Liverpool dockers; and then his total commitment to the movement against nuclear weapons, supporting the Greenham Common women and heading up many CND marches. Tony was at the forefront on international solidarity with the anti-apartheid struggle; speaking out against the invasion of Iraq in 2003; and consistently speaking up for the Palestinian people.

The memories from Scotland include not only the solidarity with UCS, the NUM, Caterpillar, Lee Jeans, British Leyland at Bathgate, May Day demonstrations – but also the huge meetings that were held during the Deputy Leadership campaign, the annual Campaign Group fringe meetings at Scottish Labour Party conferences that incorporated the Labour self-organisation of women and black members to the platforms too, and the thousands that attended the rallies during the 1988 Labour Leadership campaign. Tony Benn always spoke warmly of his own family connection with Scotland, with his great grandfather James Holmes being a steeplejack from Irvine who went on to become the MP for Govan. Tony’s father was MP for Leith, creating a home in which politics was familiar, and Tony often spoke too of the influence his mother, who had grown up in Paisley becoming an active member of the church, had in his life. He was a keen supporter of devolution, and the campaign against the poll tax featured highly during the 1988 Leadership campaign mass meetings in Scotland.

Listening back to many of Tony’s speeches from that time, all met with standing ovations, I hear him reiterating passionately the simple message ‘united we stand, divided we fall’ and, in challenging the notion that there is some common interest between those who produce the wealth and those who own the wealth, to remind us all to ask the question ‘whose side are we on?’

Tony always used to say that all he wanted to be remembered for, was as having encouraged others. I think there is rather more to it than that, but I can still see the gentle smile, the twinkling eyes, and the calm words of encouragement to that young woman speaking in Manchester in 1980…..before he spoke himself to the steelworkers in the Free Trade Hall, leaving them, and me, in absolutely no doubt as to whose side he was on.