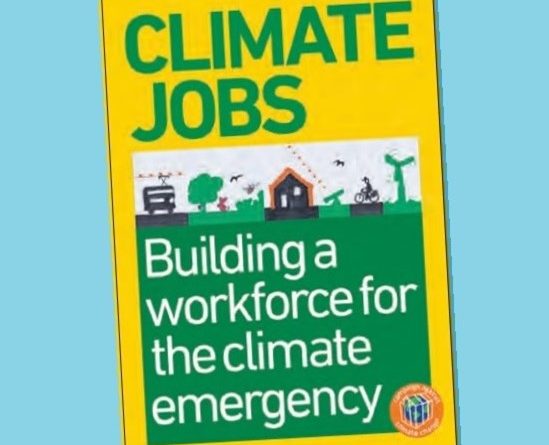 Climate Jobs: Building a workforce for the climate was written and published by the Campaign Against Climate Change Trade Union Group (CACCTU) to coincide with COP26. It is a response to the urgency of the climate crisis and lays out the type and scale of the transition needed to match it. It is essential reading for every trade unionist and climate activist.

It provides a detailed, in-depth update of the earlier work produced by CACCTU, One Million Climate Jobs (2014), showing that there are many more than a million, well paid, skilled jobs that could be created if we get serious and urgently tackle the climate emergency. Packed with ideas, examples, and accompanying technical resources, it outlines the type of workforce needed and argues that to deliver it we need to break from the failed reliance on the market and instead invest in a huge expansion of public sector jobs across all sectors – from transport, energy and food to homes, education and more.

The pamphlet argues this will require a National Climate Service, which can organise, plan and train workers as well as deliver the jobs so urgently needed, amounting to a radical transformation which will improve our lives, ensuring among other things we have warm, affordable homes, a fully integrated public transport system and most importantly a safe climate and ecology now and in the future.

World leaders, NGOs, pressure groups and corporates jetted into Glasgow for COP26. Like previous summits, it saw major corporations vie with each other in the dark arts of greenwashing, having paid millions to sponsor the event itself. COP1 met in Berlin in 1995. Since then, the process has seen a quarter-century of failure with the environmental crisis becoming rapidly and terrifyingly worse.

Failure has much to do with the fact that the COP process has never been short of corporate influence. Glasgow had 11 major sponsors, including the energy giants Hitachi, National Grid, Scottish Power and SSE. Other sponsors included Microsoft, Sky media and NatWest. Boris Johnson, Jeff Bezos, Joe Biden, Barack Obama and India’s Narendra Modi arrived in town with the world’s media touting Glasgow as the ‘last chance saloon’. But Glasgow proved to be CON26. In the run-up activists around the world were already claiming it would be the most elitist, least democratic COP ever, with the politicians of the rich countries dominating the agenda and excluding representatives of the people bearing the brunt of the crisis. And, so it proved.

Now that the circus has left town every day that passes rams home its failure and the growing existential threat we face. 2021 was a year of unprecedented climate crisis marked by terrifying floods, wildfires, hurricanes and droughts. Tipping points, like the collapse of the Gulf Stream and the Greenland ice sheet, are in danger of being crossed. Meanwhile, the Amazon rainforest now emits more carbon dioxide than it absorbs, making it a source of, rather than a sink for, greenhouse gas emissions.

The crisis is spiralling out of control because capitalism’s inherent inequalities of class, race and gender block any prospect of climate justice. Estimates of who’ll be displaced by climate change vary dramatically. The most cited figure is that by 2050 there will be 200m climate refugees fleeing harvest failures, droughts and floods. No wonder the UN Climate Report flashed up Code Red for humanity, warning that the worst scenarios can only be avoided by immediate government action.

The COP process cannot deliver because it seeks to contain climate change through market forces. COP economics are rooted in the logic of capitalism and its drive to accumulate. False panaceas – whether nuclear energy, electric cars, geo-engineering, or emissions trading – all fail because we cannot solve environmental problems by trying to recast them as part of the capitalist market.

Instead, we need to force governments to shut down and replace fossil fuel with renewable energy now. If we rely on what happened inside COP26 and see that as our last and only chance, then we’re doomed. It failed to offer even the most basic measures to halt environmental destruction – no surprise given that over 500 fossil fuel lobbyists were admitted to it. The global corporations and their political pals will not be reformed or regulated into thinking the future of humanity and the planet we live on matters more than their profits.

But there was another presence in Glasgow. Hundreds of thousands on the streets showed the rage against inaction at the top. Fortunately, many more people in Glasgow and around the globe -especially young people – are well aware of this and are angered into action by it. Credit to Greta Thunberg for calling on striking Glasgow workers to join the Friday youth strike and the giant protest march the next day. The workers’ response to her call was marvellous! The slogan ‘System Change not Climate Change’ makes sense to more and more people. It is to this growing audience – especially organised workers and community groups – that this pamphlet is aimed.

• Climate Jobs: Building a workforce for the climate emergency is available from the Campaign against Climate Change Trade Union Group – see https://www.cacctu.org.uk/climatejobs – either for paid hard copies or a free pdf download