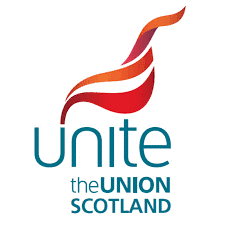 Scotland is being hit with job losses, factory closures and firms going bust. Unite has been involved in a long line of fights to save jobs including the Caley rail depot, Michelin (Dundee), RBS branches, Jamie Oliver restaurants and Thomas Cook. We’ve been campaigning hard to save jobs at BiFab’s Arnish and Fife yards and CS Wind (Campbeltown). Our officers and reps have worked flat out to develop alternative plans to save jobs at Cummins in Cumbernauld and API Foils in Livingston. The scale of these losses is devastating for everyone involved.

If things weren’t tough enough, there is an ongoing destructive tit-for-tat trade war between Europe and the US which will significantly harm jobs in Scotland’s whisky and textile industries. With up to 25% tariffs being imposed on the £1bn Scotch exports to the US from previously 0%, hundreds of jobs and communities built around the industry are now on the line. Now the Trump administration is threatening to further increase tariffs.

A new Tory majority Government, trade wars – and a still possible ‘no-deal’ Brexit. It’s difficult not to feel overwhelmed at the strong head winds facing us in the union movement. We need to ask not only what kind of country do we want Scotland to be but how we can make that happen now. What powers does Scotland need to protect working people and how do we ensure workers are treated and paid fairly?

Unite believes Scotland should have control over employment law, and health and safety. We have also criticised the unacceptable delay in Employment Tribunals operating on a devolved basis. We need to hold the Scottish Government to account, which is why we have asked for clarity on how its new Fair Work First criteria are being applied. There remains a great deal of confusion on what now determines whether a company gets public funds through an enterprise agency grant or on what grounds will a company be refused a public procurement contract.

Unite has made repeated representations to Scottish Government Ministers, including the First Minister, in order to clarify what the new criteria means in reality. For example, what are the conditions regarding the £1.7m award to Bhagat Holdings Limited? The company has taken over the site of the former Pinneys of Scotland seafood plant in Annan but to date we have received no assurances that in return for taxpayers’ money, zero-hours contracts will be banned and unions will have access to the workforce. In contrast, the criteria remain that there should be ‘no inappropriate use’ of zero-hour contracts.

The Scottish Government’s Fair Work Convention, therefore, must start to show its teeth rather than be caricatured as a talking-shop. Job creation should come with guarantees around collective bargaining and union recognition. Companies should face sanctions when they renege on such promises. Bad employers including those that have blacklisted workers should be denied procurement contracts.

The debate around the new economy should also be focussed on how the Scottish Government can use and enforce the existing powers at the parliament’s disposal. We need to call out the false claims made by the Scottish Government alongside praising it when it does get things right (such as saving BiFab and Ferguson Marine). In 2010, John Swinney said that developing a low-carbon economy would create up to 28,000 direct jobs in off-shore wind by 2020. This has turned out to be a fantasy. The fact is that there have been fewer than 2,000 direct jobs created. Scotland has lost out on billions of pounds worth of contracts to foreign based firms. Even more scandalous is the work that has been denied to local and regional supply chain firms based in Scotland, while outsourcing the manufacturing work to Asia.

Unite welcomed the Scottish Government’s intention to ensure that local and regional supply chains would benefit from contracts in the renewables sector. Yet, just several days later, American and Dutch-owned companies were feeding off the Neart na Gaoithe (NnG) contract when this work should have been going to locally based companies such as BiFab. SSE is also set to announce the contract work on the Seagreen project in the Forth. Shockingly, supply chain jobs for this project are reported to have been lost to China. The irony should be lost on no one that a company with ‘Scottish’ in its corporate name is rumoured to be awarding work to companies based in China who are supported by the state.

The Westminster Government’s Contracts for Difference scheme is in need of urgent reform. However, the Scottish Government for years should have been doing more to effectively use consent, planning and procurement powers in coordination with the Crown Estate and Marine Scotland. The Scottish Government has for too long passed the blame on to Westminster, while absolving itself for the failure to act. Failures by both governments have resulted in the exporting of thousands of jobs and billions of pounds which should have stayed in Scotland. In these dangerous and unstable times, Unite is determined to hold every government and company to account.

Pat Rafferty is the Scottish regional secretary of UNITE the union.

Don’t throw our members under the bus

‘Unite and fight’: It’s why we’re a success story during the combined COVID and cost-of-living challenges