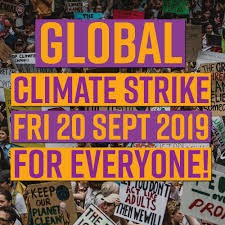 Thousands of young people across the world are preparing for strike action on 20 September. However, it is not unions or any leftist parties that are organising and leading this strike movement. Instead, hundreds of school students, co-ordinating through social media, have been educating, agitating and organising their peers to take part in strikes from attending school to demand action by governments to slow down and stop global warming and climate change.

When Swedish school student, Greta Thunberg, decided to stand outside the Swedish parliament instead of going to school, she sparked a movement that has been more successful in pressurising governments on climate change than almost any other campaign before.

Unions should be hugely grateful that Greta didn’t just say it was a protest or an action. Instead, she called it ‘Skolstrejk for Klimatet’ – School Strike for Climate – and immediately re-introduced to young people’s consciousness the idea that to challenge power taking strike action was a powerful and energising action. From this, an opportunity has been created to develop a ‘trade union consciousness’ amongst young people by demonstrating the progressiveness of unions, engaging with their movement and offering support for their aims and actions.

Less than a year after Greta’s first solitary Skolstrejk, Friday 20 September looks like being a massive day of action with demonstrations being planned for Glasgow and Edinburgh and across Europe, America and around the world. Several of these events have taken place in the past months but in addition to school students taking action, Greta and her supporters have called on ‘adults’ to also take action and to join what has become known as the Climate Strike.

Whilst this includes asking businesses to take action on the day, it is a clear call for workers and their unions to step up to the challenge of combatting climate change and to be inspired by the actions of the school students – in many cases our children and grandchildren.

The TUC at its congress in early September this year will be debating a UCU motion calling for lunch time stoppages on the 20 September in support of the young people. UNISON, taking a lead from its Scottish branches who have declared the 20 September a ‘Green UNISON Day’. This means calling upon branches to take actions on the day and having declared the week leading up to this Friday a ‘Green UNISON Week’. Other unions are making similar declarations.

The STUC is briefing affiliates on the aims of the climate strike and encouraging them to show support for the aims of the school students. They are acting as a liaison between the climate strike co-ordinators and unions and will themselves co-ordinate any financial support that can be offered to assist with the cost of organising the demonstrations on the 20 September. The STUC Young Workers Committee has decided that they will play a role in the action. In addition to the official structures of unions making preparations, various branches of Unite, PCS, UCU and EIS, have been discussing motions and making plans for supportive actions.

None will be taking industrial action. The anti-union laws don’t allow even consideration of this. Yet is also clear that workers and their unions are not at the level of consciousness on this issue to be ready to take strike action. Therefore, the activities being planned must look to raise that consciousness within unions and their members of why the climate change issue is important and deserves to be a far greater priority for them.
Actions that are being considered for the 20 September include lunchtime meetings including inviting school strikers to visit workplaces, union banners being present on demonstrations, union leaders making public statements in support, union branches calling on their employers, public and private sector, to declare a ‘Climate Emergency’ and work on action plans to address this, planting trees to symbolise the need to protect and grow more forests with attention on the plight of the Amazon, using social media to express solidarity with the school students, calling for the switching off of all non-essential lights and electrical equipment.

Unions in the school sector have a key role to play. The climate strikers have called for a day in the week after the 20 September where the normal curriculum is cancelled and they have a ‘teach-in’ where lessons are focussed on climate change. Teachers and school support staff, and their unions, should engage with this initiative and make plans with school students for this.

The news that Glasgow looks set to host the next United Nations Climate Conference, COP 26, in December 2020 adds a further challenge to every politician, local and national, in Scotland to ensure that rhetoric about world-leading climate legislation is made manifest before the world descends on the Clyde. Unions and other civic organisations must ensure that, along with the young climate strikers, we use the 20 September as the launch of a broad, mass movement to ensure young people and workers’ voices are heard and that we see Scotland actually leading on climate change, a Just Transition for workers and a future for our young people.

Time is tight: revolting against extinction