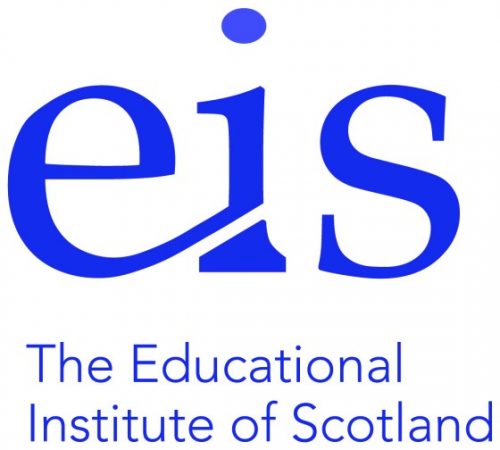 Larry Flanagan explains the magnificent mobilisation of teachers so far

The Educational Institute of Scotland (EIS) launched its Value Education, Value Teachers (VEVT) campaign last January. The aim of the campaign was simple: to seek to reverse the decade-long decline in the value of teachers’ salaries by achieving a significant pay rise for Scotland’s teaching professionals. Since the financial crash and the imposition of austerity, Scotland’s teachers have seen the value of their take-home pay decline by over 24% in real terms through a decade of pay freezes, sub-inflation pay settlements, and increases in pension and national insurance contributions.

While pay has declined workload has soared. Scotland has 3,000 fewer teachers than it did a decade ago, with pupil numbers on the rise. This toxic combination created a growing crisis in teacher recruitment and retention across Scotland. Student teacher places remain unfilled, local authorities struggle to fill vacant posts, and experienced teachers are increasingly walking away from the profession early in search of less stressful, better paid jobs.

Against this backdrop, the VEVT campaign has become a lightning rod for the discontent amongst teachers. Whilst pay is a key issue, EIS members have been clear that excessive workload, the developing crisis around inadequate support for pupils with additional support needs, and the relentless changes in curriculum and assessment are all equally critical.

All public sector workers have suffered under austerity, of course, and the EIS has been clear from the outset that the campaigns of all unions in the various sectors would benefit from synergies and solidarity actions. 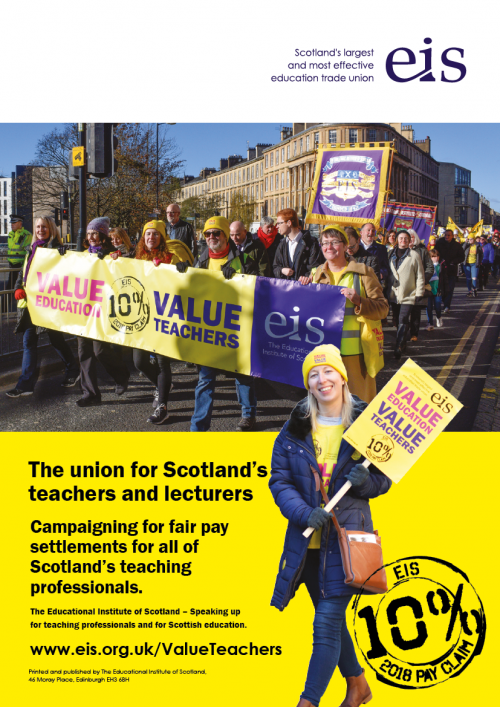 In terms of the teachers’ campaign, the 10% claim immediately signalled to members that this year was different. It emerged from our previous AGM which had demanded a major fight back on pay – inspired in particular by the successful strike action of EIS FELA in the college sector and by our members in West Dunbartonshire.

In the first phase of the campaign, the tactic was to build the narrative around the claim – aiming at members as much as the public and politicians. Our Ten for 10% tagline allowed us to evidence the case, and slowly but surely build support for the campaign from the ground up.

Active engagement by the membership was always the target. Branch meetings started getting a little bigger and then bigger still. Regional campaign events were organised and well attended. And, the lobbying of local councillors and a ‘Message the Minister’ campaign saw thousands of members who had never been active in the union before getting involved.

Whilst the pay talks dragged – almost a full year now – the EIS continued to work to build the campaign, leading to a massive turnout in our National Demonstration in Glasgow in late October, when more than 30,000 people hit the streets to demand a fair pay rise for Scotland’s teachers. Such was the scale of the protest that as the front of the march reached George Square, those at the back of the line in Kelvingrove Park (2.5 miles away) had not even moved off. The demonstration sent a very clear message that Scotland’s teachers were united in their anger.

Shortly after the demo, the EIS opened a consultative ballot on a ‘final’ pay offer that had been proposed by the employers and the Scottish Government. The EIS urged members to reject the offer, while the Scottish Government and COSLA attempted to ‘sell’ the pay offer to teachers by writing to them directly, in defiance of established protocols processes and, indeed, the Fair Work Convention. Members voted overwhelmingly (98%) to reject the offer on a 74% turnout.

These figures are significant because we have been aware throughout the campaign that the Tory Trade Union Act 2016 would come into play if we moved to a statutory ballot – for education unions, it means not only do we require a 50% turnout, we also need to secure 40% of our entire membership voting ‘yes’ to striking. In effect, someone not voting is counted as a ‘no’. The ballot result has left us confident, but absolutely not complacent, that we can beat the Tory thresholds, if required. And as things stand, we may need to do so. Learning from the CWU and PCS unions, we mapped the returns in our consultative ballot and so stand well placed to maximise our campaigning in any statutory ballot process.

At the time of writing, we are still in negotiations but to prevent the constant procrastination which is the hallmark of COSLA, we also set out our own timetable for decision making which means that January is the key month. A special Council meeting has been set for 12 January and that will consider the move towards a strike ballot, if no acceptable offer has been made. Ultimately, it will for our members to decide what we do next, but in my view the campaign has already succeeded in building enough confidence, engagement and justified anger that if strike action is required, members will vote for it.

Larry Flanagan has been the general secretary of the EIS union since 2012. He is a former teacher.