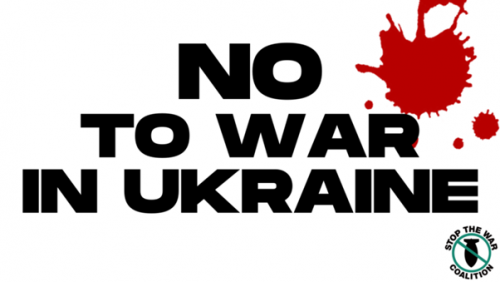 Bill Bonnar examines the background to the war in Ukraine.

To be clear from the outset: The Russian invasion of Ukraine should be completely condemned as should the appalling consequences of that invasion in terms of the death and destruction which has rained down on the people of that country. Whatever justification the Kremlin offers, there can be no excuse for this attack on a sovereign country. However, as we are being swamped by anti-Russian propaganda which has reached a state of mass hysteria, it is important to look at the background to this conflict. To recognise that the Russian invasion is not the cause of the crisis but rather a dramatic response to a much wider crisis that has been developing since 1991 and more particularly since 2013. It is a crisis in which NATO and the current Ukrainian government carry heavy responsibility.

Much has been made of Ukraine’s sovereignty, yet it should be recognised that Ukraine as a modern nation state is a recent construct. Ukraine as we know it today was a by-product of the Russian Revolution of 1917 and first emerged as the Soviet Republic of Ukraine in 1918 before being incorporated into the Soviet Union in 1922. Ukraine only became an independent country in 1991 after the breakup of the Soviet Union. The country which emerged was very varied with a large ethnic Russian population in the southeast with only tenuous links with the Kiev and other ethnic minorities. Or if one looks at the situation with Crimea which was annexed by Russia in 2014. Crimea only became part of Ukraine in 1956 following a deal between the Ukrainian Communist Party and Nikita Khrushchev. Before it was a separate autonomous republic.

When an independent Ukraine emerged in 1991, it was based on two firm principles. The first was that Ukraine should be a neutral, non-aligned country which would develop equally friendly relations with both Russia and the West. The second, recognising the multi-national nature of the new country, was that a degree of nation-building was necessary to create a state for all the peoples not just ethnic Ukrainians. For more than 20 years this two-fold strategy was carried out bring about a period in which there was little or no international or internal conflict.

This came to an end in 2013 when a ‘revolution’ overthrew the elected president Victor Yanukovych and brought the current regime to power. This ‘revolution’ was part nationalist movement, part coup and with a significant element of foreign interference. The new, nationalist regime effectively tore up the protocols that had been established in 1991. It abandoned the idea of neutrality, adopting a fiercely anti-Russian and pro-western position including a clear statement of intent that it wished to join NATO. It also abandoned the aim of a Ukraine for all the peoples replacing it with an essentially ethnic Ukrainian agenda. This immediately alienated the largely Russian population in the Donbass Region prompting mass protests in support of the former president which quickly escalated into an insurgency and the formation of two breakaway People’s Republic. This was met by an aggressive military campaign by Ukrainian forces in which an estimated 14,000 people were killed and hundreds of thousands forces to flee their homes. Most of those killed were ethnic Russians at the hands of the Ukrainian army and Ukrainian militia groups; many with strong fascist links dating back to the Nazi occupation of the Second World War. In the current situation with Ukraine the victim of a brutal Russian invasion, this can make uncomfortable reading, but it needs to be said. The present regime in Kiev are not simply the innocent victims of this crisis. It has been many of their actions since 2013 which has precipitated current events.

Another factor has been a campaign of aggressive NATO expansion pushing the western military alliance to the borders of Russia. Since 1991 Poland, Lithuania, Estonia, Latvia, Czech Republic and Slovakia have all joined NATO. This has been followed with a massive expansion of military bases, troops and missile sites all pointed at Russia. From a Russian point of view, they have been the victim of NATO aggression which has severely undermined their sense of national security. This is a key point. Any visitor to Russia and before that the Soviet Union would be struck by the constant references to the Second World War and with little wonder. The Nazi attack on the Soviet Union left 26 million people dead, destroyed thousands of towns and cities and devasted Soviet society. Anyone who reads about the sieges of Leningrad or Stalingrad would feel they were reading about the apocalypse. For the Nazis, this was not simply a war of conquest; it was a war of genocide and is deeply burned into the collective memory of the Russian people. When the Russians talk of a threat to their sense of national security, it is not empty propaganda. It really means something; particularly when most of the German invasion was through Ukraine. After 1945 Soviet policy towards western Europe was based on a simple principle that they would never again be left so vulnerable yet with the NATO expansion in the last 30 years that is exactly what has happened. Then Ukraine stated their intension to join NATO. To believe there wouldn’t be a Russian response to this threat was naïve in the extreme.

Of course, none of the above justifies the Russian invasion and scale of death and destruction now being witnessed. So why has Russia taken such extreme action? This has a lot to do with the nature of the current Russian regime and the need for Vladimir Putin to secure his legacy. The fact is his tenure in office can be categorised as almost complete failure both in terms of defending Russian security and in building a successful capitalist economy. The Soviet Union ended 31 years ago and with it the attempt to build a particular model of socialism. The collapse of that system was a disaster for the peoples of Russia by just about every definition of the term disaster one can imagine. The economy completely collapsed and has never really recovered. Today, the Russian economy is about half the size it was in Soviet times. Then it was the second largest economy in the world; now it would struggle to be included in the top twenty. Living standards for most Russians are significantly less in real terms than in Soviet times. The vast infrastructure of social provision; everything from health care, education, childcare, care for the elderly, cheap heating and housing was swept away as was the colossal investment in culture, art and sport.

As for the establishment of democracy, what emerged was an overt capitalist dictatorship – government by the oligarchs masquerading as a democracy. At the same time, Soviet Russia has gone from a world superpower to a weak and vulnerable country encircled by hostile western powers. Putin came to power replacing Boris Yeltsin; a weak, alcoholic, mentally unstable character who quickly became a puppet of the West, with the task of restoring Russia to something like its former self. He has failed completely to achieve this and his military adventure into Ukraine has perhaps been an attempt to salvage legacy. That failure has extended to the war in Ukraine. What was clearly planned as a quick decisive victory has descended into a brutal war of attrition. At its heart has been a series of miscalculations. The Russian armed forces are clearly not as strong as believed while the Ukrainian resistance, bolstered by massive military support from the West, has been much stronger than anticipated. More alarmingly for the Kremlin has been the re-invigoration of NATO. If one of the aims was to weaken NATO and push it back, then the exact opposite has happened. Non-NATO countries are now queuing up to join while others, like Germany, are taking on a more active role. The invasion has also given NATO a new reason for existing. Prior to these events one of the main arguments against NATO was its post-Soviet role. Before 1991, its declared purpose was to defend Western Europe against the aggressive intentions of the Warsaw Pact. This was never true. The Warsaw Pact was a defence against western aggression, yet this was not how it was presented to the public. With the collapse of the Warsaw Pact and many former Warsaw Pact countries joining NATO, this argument collapsed. Now a new narrative has developed. NATO is needed as a deterrent against modern Russian aggression.

All of this will have seriously weakened Putin’s position. His power rests on two foundations; the oligarchy and the army. The oligarchy, because he protects their wealth and interests and the armed forces because he keeps levels of military expenditure high. If either or both withdraw their support, then he is in trouble. At some point there will need to be a negotiated end to this war given the failure by Russia to inflict a decisive defeat and the inability of Ukrainian forces to achieve victory. What would the basis of such a negotiated settlement? This must be based on the following principles; Russia must recognise the sovereignty of Ukraine; Russian must pay reparations for the massive damage inflicted on the country by its invasion; the principle of sovereignty must be extended to those parts of Ukraine who may not wish to continue as part of that country. This particularly applies to the Donbass Region; Ukraine must not join NATO. It could be argued that as a sovereign country it has the right to apply for membership. This is true but NATO could refuse that application. Particularly as Article 6 of the NATO Charter states: ‘member states should settle any international disputes which they may be involved by peaceful means in such a manner that international peace and security is maintained’; and there should be an end to all foreign intervention in Ukraine both Russian and Western; of which the latter has been significant over the past decade. Only an agreement based on the above can be the basis of a settlement in the interests of the peoples of Ukraine and the international community. The alternative is a war with no end in sight.