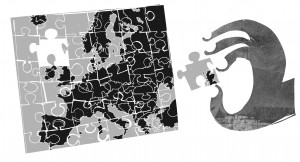 Over the past few months several referendums on self-determination have been held in Catalonia. These public consultations have taken place in hundreds of cities and towns with the collaboration of thousands of private citizens without the financial backing or support of any political party.

As it was expected the position of Spanish political parties and media, has been against this exercise of direct democracy and direct political participation. The reactions have ranged from the criminalisation of the popular referendums to the denial of legal effects regardless the outcome of participation and the results of the elections. The first message to the Spanish national discourse has been that over two hundred thousand people have already voted in a non politically-binding consultation, showing that the national self-determination necessarily requires personal self-determination. The main purpose of this paper is to explain how these popular consultations have been forged, the democratic and political meaning of these democratic movements and finally how this experience can be positive for other constitutionally oppressed nations without State.

In May 6th of 2009 a public legislative petition was presented in the President Board of the Parliament of Catalonia to enact a binding referendum of self-determination. In June 16th of 2009 the parliamentary body rejected the proposal arguing that such initiative was unconstitutional and against the Catalan statute of autonomy. In other words, a political entity such as the President Board of the Parliament of Catalonia, representative of the people of Catalonia, limiting itself and assuming an exclusive competence of the Spanish Constitutional Court decided to disallow a debate in our House of Representatives on the status of Catalonia within the Kingdom of Spain. This refusal was against two resolutions of the Catalan Parliament (December 12 1989 and October 1, 1998) that states:

”The Parliament of Catalonia, in the 50th anniversary of the Universal Declaration of Human Rights confirms once more the Catalan people’s right to determine freely their future as a people in peace, democracy and solidarity”.

In some sense the resolution of the President Board of the Parliament of Catalonia was coincident with the failure to conduct a referendum by the Lehendakari Ibarretxe (Basque President) in 2007. Although in this case the Lehendakari was threaten by the Spanish judiciary for an ad hoc political felony because of his intention to develop a binding referendum in the Basque Country.

Following the refusal of the political representatives, the people decided to organise a popular consultation by themselves. Therefore in September 13, 2009 the town of Arenys de Munt decided to organize the first referendum of independence. Before the completion of the consultation the Spanish political apparatus attempt to limit the right to political participation of the citizens of the Catalan town prohibiting the popular consultation. The injunction of the consultation, the threats of the organisers and the judicial authorisation of a fascist Spanish demonstration in Arenys de Munt did not prevent the realisation of the referendum. The Query was formulated exclusively for residents of this village on the following question: Do you agree on Catalonia becoming an independent, democratic and social State of law, integrated in the European Union? This query was the first democratic one on Catalonia independence and, despite being municipal and symbolic, had a remarkable influence on Catalan and Spanish politics. After this first experience queries have spread throughout the nation, on December 13, 2009 several hundred thousand people in small towns and villages across Catalonia voted and the next queries are planned February 28, 2010 and April 25, 2010, when Barcelona will vote.

The Spanish Government has restricted the political debate on the nonbinding effect of the consultations. Certainly, no much can be done against the people democratically exercising their right of political participation. Although the Spanish Constitutional text legitimates the armed forces to defend the Spanish territorial integrity, nobody doubted the Spanish reaction to the consultations and most importantly is that nobody seems to matter the reaction. What really matters is the decision of the Catalan people and how the international community will respect our democratic decision. In this last sense, as a citizen of Catalonia I want to thank the work of the international observes (Christopher White, Jan Jambon, Xose Manel Beiras, Agurne Barrusa, Gaizka Amorrortu, and others) as guarantors of the queries’ transparency and international emissaries of the will of the people of Catalonia. The significance of the observers is also transcendent from an ideological point of view since they directly affect the Catalan and Spanish popular belief.

But the popular consultations of self-determination are also an excellent exercise of political theory. One of the main issues that emerge is related to the constitutional and democratic legitimacy of this sort of queries. Relations between democracy and constitutionalism have been analysed from Aristotle, Cicero and Polybius until today. This is clear evidence of the unresolved problematic of this issue. The topic appears and disappears in our systems as a kind of eternal return, in a Nietzschean sense, because it has not given a real solution (if there is one). There are basically three theoretical options for conceiving of the relationships between constitutionalism and democracy (Zurn): they can be equivalent, in this sense both concepts can be seen as more or less synonymous, so that use of one of the terms necessarily implies all of the various principles, ideas, institutions and practices involved with the other as well. They can be seen as basically, antithetical: constitutional concerns pull one way, democracy concerns pull the other. And finally they can be seen as mutually presuppositional: according to this view, democracy in some important sense cannot be realised independently of constitutionalism, and constitutionalism likewise inevitably requires forms of popular participation in government.

The assumptions that have caused the cyclical appearance of this ancient conflict in modern constitutional democracies are partially based on the semantic indeterminacy (Derrida) of concepts such as democracy and sovereignty, popular consultation or referenda. Another factor to be considered is the political manipulation that occurs through legal constitutional interpretation.

Nowadays there are several champions of the people (Cicero), excellent authors like Mark Tushnet, Larry Kramer, Bruce Ackerman, and others who are trying to bring more transcendence to the people; they are trying to situate the people in the center of the political and juridical system. These theories are important because they educate people to participate in the contemporary decisions-making. Referenda and popular queries such as those related can be understood as an example of direct democracy.

Certain doctrinal and politic sectors in Catalonia have been trying to legitimize these popular queries based on Spanish Constitutional law. The Spanish Constitution of 1978 did not establish a completed or closed model for the territorial organisation of the State that can be subsumed into one of the two great types of State (federal or unitary). The constitutional text does not contain a particular model of territorial organisation because it does not expressly define one: it does not say whether the Spanish State is federal, integrated, unitary or regional; the Spanish State is not even defined as a “State of Autonomous Communities”. We cannot fail to mention the fact that the State of Autonomous Communities appeared at a delicate moment of the modern history of the Spanish State and after 40 years of Fascist dictatorship. The Constitution a system biased in favor of the central government.

The Court has jurisdiction over conflicts between state authorities (including nations and regions), the lawfulness of international treaties according with the constitution, and the constitutionality of laws. In the Spanish case, the dispute over the scope of jurisdiction of each unit of government can legally be channelled through the conflict of powers between governments. Compared to the most of the federal systems, this institutional weakness exacerbates a higher level of conflict between the different levels of government. The Spanish Constitutional system does not facilitate communication and negotiation between the autonomous communities and the central state. Furthermore, the Constitutional Court is de facto the only institution that can provide solutions to these conflicts.

I will not deny that some of these arguments appear to be rational and very well grounded. But this strategy loses any sort of potential success in the fact that the only valid and binding constitutional interpretation is performed by the Spanish Constitutional Court, where Catalonia as such, has no representation in the style of Quebec in the Canadian Supreme Court.

Unlike the fascist demonstration that occurred on the day of consultation in Arenys de Munt, to consult the Demos is to expand the country’s democratic roots. It is a matter of time that Catalonia will organise a legal binding referendum of self-determination, then we expect a response from the international community by rewarding a democratic, non-violent and open process.