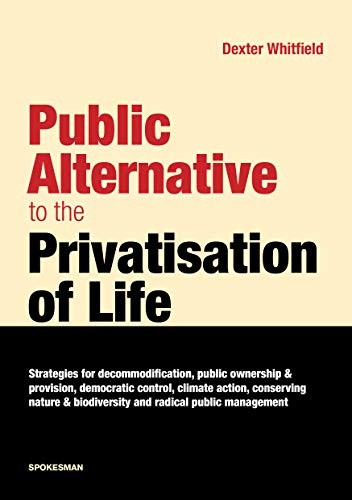 Public Alternative to The Privatisation of Life is the shortened title of Whitfield’s latest book. The notion of the privatisation of life is dramatic in language and scope. This is appropriate given the enormity of the task that Whitfield looks to take on. A task that does not merely involve the descriptive but one that includes outlining the actions required to challenge privatisation and the ideology that underpins it.

The result is a book that will be a useful resource for trade unionists and environmental, political and community campaigners everywhere because of the book’s global outlook. Privatisation and the commodification of all things ‘public and planet’ has been an overarching aspiration of neo-liberalism over the last three decades. Whitfield attempts to respond to this. International examples, comparisons, case studies and analysis are all employed to illustrate the impact of the ideology of privatisation.

Helpfully, a structure is suggested for those using the book as a starting point to respond to that ideology. Three sections are provided to assist the reader. The first explains the thrust of financialisation, marketisation, individualisation and privatisation. These connected policies are assessed in scope and scale. The second provides evidence on the impact of the policies associated with privatisation detailing the extraction of profit and its negative impact on democracy, accountability and equality. The third attempts to set out a ‘radical agenda for decommodification’ doing this by asserting an alternative, one that promotes public ownership, re-municipalisation, democracy, ‘radical public management’ and investment.

How far does the book go in addressing the purpose of each section mentioned above? From the perspective of this Scottish local government trade unionist, it goes a long way. Over the last ten years I have been directly involved in organising demonstrations and deputations to oppose cuts to council services. During that period the spectre of privatisation has increasingly permeated the thinking of managers and politicians. Relationships of care for citizens, communities and the environment have been rebranded as relationships of consumption. ‘Public Alternative’ offers a challenge to this.

It does this by reminding us in section one of the close relationships between privatisation and the global move towards automation and mega-cities. Here in Scotland, we know about centralisation and city deals. We also know about the impact of new technology. In this context, Whitfield highlights that the ‘tech industry is gender-biased’, focusing on assumed male interests that impacts algorithms, robots and the tasks they might do. It is IBM, Cisco and Software AG which are benefitting financially and influencing this agenda and not female social care workers. The first section also restates the danger of cities and councils going bust. Privatisation and austerity have driven up poverty. The impact has been on jobs and services. We are reminded that ‘inequality and insecurity should be jointly addressed’.

Section two draws on David Harvey’s work and talks about ‘accumulation by dispossession’. Private capital benefits from the removal of provision from the public. It benefits from contracts but also from greater capacity to extract surplus value from workers pushed into new parts of the private sector. The profits generated create greater capacity for challenging the public sector and targeting its infrastructure. Prices can then be attached to services expanding the opportunity for more exploitation. This has happened because of politicians and the managers they employ embracing a value base ‘limited to outcomes’. Narrow outcomes that fail to see local government’s broader role in relation to the welfare state, climate action or reducing inequality. All this leaves space for ever greater individualisation within society.

The third and final section ask us to think about how we respond. Throughout the book examples are given of opposition and of alternatives being put into place. But for the ideology of privatisation to be fully challenged more is required. Involving citizens, public employees and unions is required. As is a fundamental belief in transparency and accountability. This all needs to be located in a plan to bring services back into the public sphere and to protect them from attack from those who would put profit before people and planet.

Whitfield says that language is a place to start: people should be treated as citizens or passengers not customers. Beyond this, employee conditions should be considered in relation to assessing the contribution of a service to wellbeing. Additionally, radical public management is needed to defend public services from financiers and corporate interests.

Taking on privatisation and all that surrounds it may seem like an enormous task. Unfortunately, failing to respond to this challenge will see the privatisation of everything. Some may level criticism at the concluding chapters for their limited ability to fully describe the way forward. That would be to largely miss the point as this book provides a resource. It is a tool and it is our responsibility to use it.

Power to the people right now

Dundonians doing it for a decent Dundee