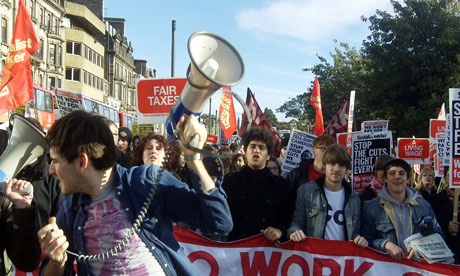 The trade union movement in Scotland faces challenges on many fronts.  It continues to have a major role to play in forming and articulating the arguments against austerity and for a fundamentally new approach to the economy and social justice.  It does so at a time of renewed attack on trade union organising and employment rights and at a time when the future of Scotland has been brought into sharp focus by the election of a majority SNP Government in Scotland and the promise of a referendum on Scotland’s future at some stage during the current parliamentary term.

This time last year, trade unions led one of the largest ever public demonstrations seen in the United Kingdom.  In March 2011 over half a million people descended on London to ‘March for the Alternative’ in an action which underlined the continuing capacity of unions to mobilise, both their own membership and to reach out to wider communities. STUC and affiliated unions chartered  trains and buses to make the journey south as it became clear that, building on its own Better Way demonstration on October 2010, STUC and Scottish unions had no intention other than to be in the leadership of protest.

The STUC is also seen by some as the ‘natural creator’ for, and sponsor of, ‘the third option’ – some form of enhanced devolution. Our approach thus far has been more circumspect. Assumptions that the Scottish Trade Union Movement can automatically put forward a ‘Home Rule short of full independence’ position based on its traditional role require further examination in the context of last year’s election result.

In conjunction with such ‘traditional’ forms of protest, unions have upped their game in respect of the quality of economic arguments employed and the means of communication.  Thus we have seen improved use of digital technology and social networking to improve communication and organising as well as increased co-operation between individual unions and those championing non-traditional activities such as occupation and civil disobedience.

STUC’s own ‘There is a Better Way’ campaign seeks to maintain a clear economic alternative, to strengthen the understanding and confidence of its owns members that our arguments are right and provide the platform and support for community organisations and reinvigorated Trades Union Councils to strengthen local activity.  The campaign uniting Edinburgh local government unions and the local community in successful opposition to service privatisation was an outstanding example of how the combination of detailed policy analysis and organising activity can achieve positive results.

Whether locally or nationally, it will be a challenge to maintain and enhance the trade union position as an engine for economic and social policy alternatives in current circumstances.  The Europe-wide austerity drive, whilst confirming the fundamentals of our policy critique, has also provided a fillip for the ‘no alternative’ brigade.  The apparent uncertainty of the UK Labour leadership in its approach to economic growth, pay and cuts to public services has at times weakened the developing consensus on alternatives to austerity. Equally unions continue to face a hostile media limiting available avenues for communicating our position, whilst the job losses across the economy and attacks on facility time impacts on organising and pressurises membership levels. 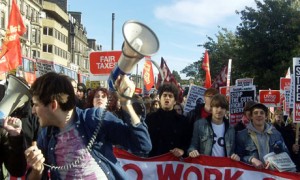 In this context, the November 30th Pensions’ Day of Action was a vital show of strength, indicating the capacity of the trade union movement across Scotland and the United Kingdom to mobilise on an almost unprecedented scale and increasing union membership density even while overall employment continued to fall.

Equally, the patient approach to building the case for the alternative appeared to pay some dividends. The Coalition Government clearly calculated it would win the propaganda war over the facts of the pensions’ dispute and the consequent battle for public opinion.  It seemed particularly certain that its cynical attempt to divide public and private sector workers would be effective. The reality was different.  An opinion poll commissioned by BBC News on 28th November suggested that 61 per cent of people believed public sector workers were justified in going on strike over pension changes and younger people showed particular sympathy – nearly 80 per cent of 18-24 year olds supported the action.  Particularly heartening for us were figures finding unions to be the most trusted body on the provision of accurate information on the affordability of public sector pensions, with 33 per cent of those asked rating unions most highly and the government scoring just nine per cent, with business leaders on 13 per cent.

Notably a number of disputes centering on private sector pensions, not to mention other conditions of employment have developed giving the lie to the propaganda that unions are uniquely public sector organisations.

The Scottish Government’s statements opposing UK Government pensions’ proposals was welcome, but was, in the eyes of many union members, undermined by its subsequent decision to continue with Parliamentary  Business on November 30th rather than support a Green/Labour motion to show full solidarity with the strike. The warm words also belied a willingness to propose any real alternatives in pension schemes where the Scottish Government have discretion.

Some scheme-specific talks have now opened at a Scottish level and while negotiations continue down south, the potential for further industrial action is a clear possibility.

STUC’s main campaign and policy themes continue to be jobs, services, fair taxes and a living wage.  Not only does unemployment continue to rise, but such employment as is being created is overwhelmingly part-time and low paid.  The flip-side of a lower-than-expected fall in unemployment at the worst of the recession has been the expectation of a largely jobless recovery if and when improvement begins.  Youth unemployment is a national disgrace, as are the workfare policies being promoted in the stead of meaningful investment in people.  STUC is also working to ensure that the highly worrying recent trend on women’s unemployment is addressed.  In both these respects, unions expect to continue a clear focus on defending public services and to highlight the importance of public sector procurement as a driver both of employment, proper employment standards and training.

The Congress 2012 agenda reflects many of the aforementioned concerns. As well as unemployment, debate can be expected to centre on trade union and employment rights, pensions and public services.  But the agenda will also reflect the massively-increased interest in Scotland’s constitutional future with motions and amendments on the subject from many of STUC’s major affiliates.

Much is expected of the trade union role in shaping the arguments and playing role in deciding the future of Scotland – both in respect of policy and process.   This is partly due to the historical role of STUC as a driver for devolution and the creation of the Scottish Parliament. It has thus been assumed by many that STUC will adopt its ‘traditional’ civic role, akin to that played as part of the Constitutional Convention. It is also seen by some as the ‘natural creator’ for, and sponsor of, ‘the third option’ – some form of enhanced devolution.

Our approach thus far has been more circumspect.  Whilst STUC continues to see a central role for unions in civil society and whilst it believes all options must remain in the table at this stage, it also recognises that objective conditions have changed. There is now a Scottish Parliament, and it is at least arguable that a need for a civic/political body to articulate Scotland’s views has been superseded.

Equally, assumptions that the Scottish Trade Union Movement can automatically put forward a ‘Home Rule short of full independence’ position based on its traditional role, require further examination in the context of last year’s election result.

This not withstanding, there is an appetite among trade unions to consult members – a process which is some cases is already underway. We also see the need for a deeper, fuller, calmer, more rational debate than we have hitherto seen – a discourse which needs to take place throughout Scotland’s communities.  If we can play a positive role in facilitating that, we will.

Fundamentally however, Scotland’s unions will wish to see all future constitutional options, including the potential for enhanced devolution, considered through the prism of economic and social justice, environmental sustainability and the empowerment of communities.  The current economic crisis is not a passing phenomenon.  As our ‘There is a Better Way’ campaign argues, a fundamental shift in economic power and democratic accountability is required.  Assessing what type of Scotland will be best empowered to meet that challenge is not a decision to be taken lightly.