From a contemporary perspective, it is strange to think that much of the debate in the 1950s and 60s on ‘automation’ and the future of work was about the opportunities and challenges of the huge increase in mass leisure and the end of scarcity that was about to come. How then did we get to where we are now in the UK with a high proportion of those in employment who are ‘time poor’, experiencing ever-increasing intensity of effort at work with long hours and later retiral? The outcome of forty years of economic development has been a vast expansion of things, the commodification of many services, greater inequality and high-pressure lives. For the minority who are unemployed, poverty, social rejection and low morale make it difficult to use time constructively.

The Anglo-Saxon model has been more extreme in these respects than most other developed countries. In the UK there are some pre-Thatcherite origins to this. Trade unions here in the post-war period prioritised wages over working hours. I can recall doing some research in an Italian-owned factory in Glasgow in the 1970s and finding that workers did not know that in the same factories in Italy, employees had much longer holidays. The shop stewards’ convener did know but did not think it was an important issue. Matt McGinn’s song – Two Nights and a Sunday Double Time – was not so far off the mark. Continental workers, then as now, had better holidays and hours and it was the Scandinavians who led the way in parental leave. Nor did the French and Germans and Swedes have to sacrifice earnings and other financial benefits for the sake of more leisure. It is difficult to know whether this failure to promote better working- time conditions in Britain arose because of lack of political and trade union vision or because this was simply a response to the priorities of employees. Since few UK workers were (or are) aware of their disadvantaged position, we do need to look at the reasons for the lack of aspirations. The closed shops in Germany for much of the weekend to enable people to have social time together would be a culture shock for the younger generation here who have been socialised into the assumption of seven day consumerism as the bedrock of our society.

The Thatcher period and the continuity of neo-liberalism through the New Labour years removed much of the choice from workers. Weakened unions and the fear of unemployment greatly strengthened managerial power to dictate the terms of work. There is extensive unpaid overtime because jobs depend on being seen to be keen. This applies at all levels and particularly at middle-management. In addition the past few decades of hyper-commercialism has driven people to maximise earnings as the over-riding priority. The housing market was used initially by Thatcher to tie people into high mortgage dependency and the Blair/Brown use of spiralling housing costs and high personal debt to fuel economic growth resulted in the pressure to make money taking precedence over everything else and the two-wage family becoming a necessity for many households. For those who are graduates, student debt adds to that personal debt burden (a much bigger problem in England) and now many students have to work long hours in paid employment throughout the year at the expense of their studies.

Apart from mortgage payments, the constant multi-media promotion of ever-changing goods and services as essential to social status and personal fulfilment has increased people’s money dependency. Contemporary capitalism cannot sustain itself without constantly speeding up the frequency of consumption while ironically undermining this by trying to reduce the costs of labour through increasing the intensity of work and keeping earnings for the majority low. Each company has to hope that others will increase the consumption capacity of the public. If it were not for public expenditure, cyclical crises would be more frequent. Yet the result of so much of this consumption is to make us run fast to stand still. More care services have to be commodified because people are short of time. More expensive pre-prepared food is bought because people are short of time. More recreation is bought because it seems easier for stressed workers. The peak financial pressures come at a point in the life-cycle when the need for personal time is greatest. Young families need time but they are under pressure to maximise earnings rather than leisure in order to buy and furnish homes, to pay for child-care, to pay for cars because of so much geographical centralisation, and for graduates to pay off student loans. Time poverty and the stress it produces have become a taken for granted aspect of modern life.

In his 1974 book, Labour and Monopoly Capitalism, Harry Braverman predicted that new technology and new managerial practices would sharply increase managerial control of the labour process, not only for manual workers but significantly also for white-collar workers. Thirty years later the extent of that centralised control has been one of the defining features of the modern workplace, depersonalising the work and leaving the employee as subject rather than agent. Most striking has been the extent to which this has spread to the traditional professions. New Labour has been characterised by its obsession with the control of everyone except those at the top in business. The ‘light touch’ applied to the senior people in financial services contrasts with the constant micro-management of everyone in the public sector and support for the same ethos in the private sector. This control is imposed through excessively detailed job specifications, constant measurement, ‘naming and shaming’ with league tables. The same values that produced the call centre have been applied to the health service, to education, to policing, to postal services and throughout the private sector. New technology has enabled management in public and private services to keep tight control of what each worker is doing from portion control in catering to hourly sales figures in retail to patient throughput in hospitals to access to the content of telephone calls and emails. One of the most consistent complaints when people talk about their work is about this micro-management with its lack of personal discretion, its constant reorganisations to meet imposed targets and to be seen to be showing initiative, and its frequent rigid irrationality that junior employees dare not challenge. This creates a stressful work environment with no shortage of evidence that the outcome frequently involves displacement of goals – working time channelled into box-ticking rather than thinking about how to achieve the real objectives of the organisation. All the old research into assembly-line work identified lack of any personal control over the job as the most disliked aspect. That feeling has seeped into many other areas of employment. At least the public sector should be able to move away from these managerial approaches and engage with its employees in genuine co-management. 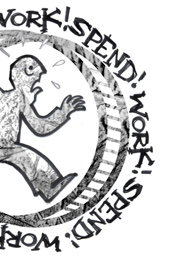 Add all of this to the most basic change that has been prevalent since the 1980s – job cuts to boost profits – and we have millions of employees with increased workloads who feel they haven’t time to do their job thoroughly and also lack discretion and control.

Our intellectual heritage has provided us with a rich source of material on the significance of work in our lives. In the 19th century Marx, Ruskin, Morris were outstandingly perceptive in identifying the social and spiritual/psychological aspects of work as well as the importance of fair economic rewards. From the 1960s and 1970s there was a growing interest in Marx’s concept of alienation, in industrial democracy and in job enrichment. The 1980s saw a new interest in understanding the role of informal labour or ‘self-provisioning’ and the past decade has seen ‘happiness’ and ‘well-being’ research and the relationship to work.

Unfortunately little of this has found its way into mainstream party political discourse. More accurately, none of it has. The outstanding late 20th century theorist on rethinking work was Andre Gorz who challenged the Left to question traditional patterns of employment. Why, he asked, are we not benefiting from new technology by sharing work and radically reducing working hours? Why not the 30 hour week or the six month working year? Why are we not spending more time on labour for our own use/own choice rather than on exchange value labour? This, after all, was Marx’s vision for communism. This is certainly not a private enterprise vision. A strong state would be necessary to regulate hours, essential production and a guaranteed social wage. Strong local government would be necessary to provide some of the amenities to enable people to make best use of their increased free time. Recreation facilities, workshop and studio space, shared access to equipment would provide us with the opportunity to improve the quality of life for ourselves and the community. Many of the services that have become commodities to be purchased because we are time-poor could be provided from the skills of family and friends.

A serious initiative to develop a programme across all areas of employment to reduce working hours would address many of our current problems. Child-care, a major expense for young families and a bar to employment for many single parents, would be radically cheaper if all parents were working much shorter hours. A later retiral age would not be problematic if the working week or the working year was much shorter. Voluntary work would have a much wider range of participants. There could be more genuine care in the community. Gorz’s assumption was that more free time and support for creative work and community involvement would reduce the demand for constantly accelerating consumption as the principal source of status and meaning, that more control over time would contribute to a more sustainable society.

Of course, far from rethinking the meaning of work and giving people more control over time, British Governments have been the worst in Europe in opposing reform in employment conditions and British business has been among the most regressive in demanding worse conditions than their continental competitors. The opt-out from the working time directive, shamefully demanded by Labour as well as Conservatives, has made it easy for employers to impose long working hours and unsocial hours. The trend towards centralisation of public and private services has imposed longer travel to work on employees. The financial services were encouraged to trap increasing numbers in high debt. Developing new objectives for work and time needs to be the start of a radical process of change that brings together the traditional aspirations of socialists and the social and environmental aspirations of Greens. Above all, it will resonate with the day to day experience of most workers