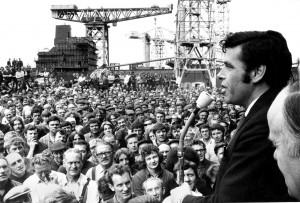 In summer 1971, with every active communist in Glasgow, I was aware that something was fomenting in the shipyards on the upper Clyde. I was also very aware that we had a university Rectorial election that October. We needed a candidate. The two events were to come together to an extent.

The most highly articulate and widely-reported – though not by any means the only able – spokesperson of the shipyard workers was then-communist, Jimmy Reid. His ability ensured that he was a well-known public figure in Glasgow long before the workers of Upper Clyde Shipbuilders became, with good reason, internationally famous.

I recall visiting Jimmy in his council flat in Swallow Road, Faifley, above Clydebank, to discuss whether it would be helpful if he were nominated as a candidate. He simply said: ‘Aye’. The initial meeting of left-wing students agreed to nominate him – he was very deliberately not proposed by a Communist Party member. Jimmy’s first encounter with some of his student supporters was held in the Criterion pub in Dumbarton Road, Partick in Glasgow, but moved just along the road to a ‘posher’ pub, rare in Partick then, at his request. I think these all took place in June 1971, in the hiatus between me sitting my ‘finals’ exams, and the publication of the exam results. Some weeks before, the letters UCS were known to everyone in Britain, and in time internationally, as eight thousand or so Scots shipyard workers became heroes for one of the most audacious, and successful, workers’ actions in recent history.

By August, two months before the Rectorial election, the shop stewards had announced the work-in. The Rectorial campaign was fascinating, and to our delight, successful. I am not being immodest when I claim I played a wee role in its success. I drafted the final campaign leaflet, ‘Reid for Rector’, and did a few other things. Including a lot of fly-posting, a largely nocturnal (because of its illegality) art in which I perforce learned to become fairly proficient.

At some stage, before term started in October, we had wind that the right in the university, worried that we had a strong candidate who had at least a chance of winning, was seeking a credible candidate who might split the leftish vote. We heard that Michael Parkinson, widely known as an able interviewer and attractive TV celebrity, was their choice.

Parkinson had interviewed Jimmy for his programme, and we hoped that if he knew big Reid was a candidate, he wouldn’t stand against him. So, on behalf of the campaign, I wrote to him, inviting him to speak for Jimmy in the Rectorial debate. During a subsequent phone-call to his office, I was told he couldn’t attend the debate, but would have been proud to do so, or some such supportive comment. It was the only phone call in my life which I tape-recorded, although I never had to use the tape. Parkinson was notan opposing candidate – for some strange reason, his application was wrongly completed. I leave the reader to speculate why a normally meticulous man should have wrongly completed something of importance.

It must have been one of the most tightly-fought Rectorial elections ever. Reid won and his ‘rat-race’ speech after his election became, deservedly, world-famous. To the best of my knowledge, and I’m more likely to know than most folk, he wrote it all himself. The New York Times published the speech in full and called it ‘the greatest speech since President Lincoln’s Gettysburg Address’.

Dougie Harrison is a former STUC Assistant Secretary (1976-1990). He has been a school teacher, student union president, bus driver and director of a number of charities and campaigns.