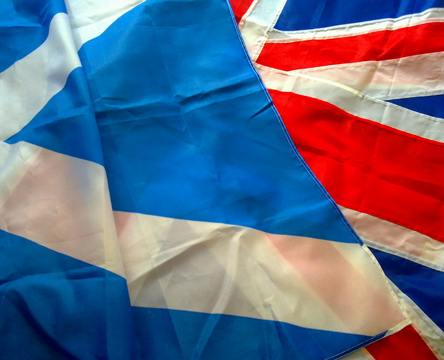 Reading through the Yes Scotland response to the STUC’s A Just Scotland report published in February, one might be mistaken for thinking that this group of keen positivists believe the STUC to have endless resources and that our movement should be charged to scribe the welfare, defence and taxation blueprints for a possible future independent government that our members, and the Scottish people at large, as of yet appear indifferent towards.

But, I do not wish to make a narrow partisan point, because at least the Yes campaign is engaging in A Just Scotland, unlike the other side. Better Together are once again silent and absent on anything that could be called debate. This dreary lack of engagement makes for a lacklustre political climate in Scotland, reflecting badly on us all.

A Just Scotland correctly identifies that the real debate on Scotland’s future is not polarised by the Yes or No camps. Personally, I remain sceptical about the value of the formal campaigns. Some notable exceptions aside, both are populated with hacks, harbingers and has-beens of the Scottish political establishment. The reality for the Left and progressive forces is that however Scotland votes, our future is tied in to monetary, fiscal, policy, services and structural transfers with the rest of the UK. Capital is concentrated in the City of London, the European super market and the international global forces of capitalism, militarism and repression remain intact. Therefore, the real debate for the labour and trade union movement is not if or how we may achieve a separate Scottish socialist nirvana or rally to the defence of British collective social solidarity, but how we tackle class inequalities, poverty and exclusion within Scotland and how we deliver our society and services to a more socialistic model and in doing so, protect public services from the dominance of the market.

25 September 2012 will be remembered as a mile stone in Scottish politics. It was the day that Johann Lamont, Scottish Labour leader, abandoned support for universal provision and instead pinned her mast to means testing. Ironically, Labour’s withdrawal from a fundamental principle of universalism drew light away from the fundamental issue of the low tax agenda of the SNP. Both parties have it wrong!

The day of dialectical debate being led by Scottish political parties, however has long since gone, if it were ever there. In Scotland today, there is no left-right division between Scottish Labour and the SNP at a leadership level. Both are firmly embedded in the centrist social democrat politic. The emphasis may vary from time to time, but both would hold true that advanced market capitalist economics can co-exist with socially just objectives. As the STUC puts in A Just Scotland – Scandinavian style social justice with US style low taxation? It just doesn’t add up.

The real debate, if it is to take off, must come from inside the workplaces and gathering places of Scotland, organised amongst those who are already organised and trusted – our own representative structures. The real debate must be open, inclusive and engaging to seek the genuine participation and contribution from of members of our movement and community organisations. It must be educational and firmly challenging of the austerity defeatists, the narrow “something for nothing” welfare apologists and the flawed Left analysis that calls on the class to wait until after Independence Day before any improvements to our conditions can be possible. The real alternative must be routed in a strong belief that Scotland can become a better collective, socialised society regardless of the constitution and that must be presented through a clear class analysis and a popular economic alternative.

The Scottish trade union movement is once again charged to take up its historic lead to make the demands for Home Rule in the interest of the workers, their communities, in support of those in need and in solidarity with those in struggle here and globally. For the Public and Commercial Services Union, engagement and education on the future of Scotland is part of our ongoing messages themed under “Austerity Isn’t Working: Tax Justice, the Economic Alternative, and the Welfare Alternative”.

PCS is engaging members on what kind of Scotland we wish to live in; powers over how and where we live; how as civil and public servants our work contributes to that society and how it is valued and how we can receive a living wage and fair pay, terms and conditions in exchange for our labour; whether the services we deliver can be more publicly accountable, less market-driven and that internal industrial democracy can be developed in the workplace and throughout the structures of our employment; trade union freedoms, employment rights, health and safety regulation and equalities and human rights regulation with real protection and enforcement; how we seek to participate economically, as citizens and in our communities; how our children are educated as future citizens and how our dependents are cared for by society; what kind of social security and assistance we should expect in return for our national insurance contributions when we are ill, out of work, vulnerable or elderly; how justice can be accessible, fair and restorative; how our natural and carbon environment can be protected and secured for future generations; how our transport and technology can be improved; how we rid these waters of nuclear weapons; and on retirement from work; what sort of pensions and dignity we require to sustain us into old age.

And here is the beef that neither Yes Scotland, advocates for independence including late-comer to the debate, Steven Purcell (Sunday Herald 24.2.13) seem to get. An independent Scotland would require to transfer, retain or find new jobs for tens of thousands of existing UK civil servants already working in Scotland – before any new jobs can be created. The majority of civil servants in Scotland (and almost two thirds of PCS members) work for UK departments, delivering services from within Scotland to the public throughout the UK on welfare, taxation, defence, borders, immigration, passports, transport, tribunals, equalities, health and safety regulation, food standards and other public services. Competent, skilled, motivated and loyal public sector workers.

What are we to do with this cadre of civil servants at the heart of central government services in Scotland? How should they be incorporated into a more socialistic, egalitarian Scottish public service, along with their colleagues in local government, health and the emergency services? Four sentences in Yes Scotland’s response don’t even consider that it is time to challenge the antiquated and outdated notion of these workers as “servants” to the Crown. Currently, Her Majesty’s Home Civil Servants as employees of the Crown, are not accountable to the UK or Scottish Parliaments, but retain statutory responsibilities and protections to ensure their political neutrality. Their job is to implement the executive decisions of Ministers and elected administrations.

Since Chancellor Gordon Brown’s 2005 announcement that 100,000 civil service posts would be slashed, we have seen the haemorrhaging of hundreds of thousands of jobs, taxes going uncollected, benefits delays, IT failures and long queues at airports and ports. Devolved areas are not immune – although PCS campaigned for, negotiated and won a no compulsory redundancy guarantee with the SNP administration in 2008 – over a quarter of jobs have been lost to the sector over that period, with many more to go this side of the 2016 Scottish Parliament election.

Yes Scotland could do well by dropping the shared service and accountability rhetoric and examine more closely the PCS alternative vision of the civil service as an essential part of democratic society, not the economic orthodoxy of privatisation and marketisation and cost cutting equating to greater efficiency. Further devolved, delegated or post-independence transitional powers to Scotland will be subject to scrutiny, negotiation and may take years, if not decades in some cases to transfer. What is clear though is that in the event of a Yes vote, the post-referendum period between 2014 and the 2016 Scottish Parliament elections, it would be the current SNP administration not the radical indy Left that would be laying down the terms of that engagement.

Post election 2016, SNP or Labour are likeliest to be running Scotland. Concerns over Labour’s withdrawal from the principal of universal provision, and the SNP’s obsession with low taxation, reducing corporation tax etc remain a central concern, and one which the Yes Scotland response to A Just Scotland doesn’t begin to tackle.

Anyone interested in changing the constitutional make up of a country should pay more attention to the role of its civil service. Civil and public services must be placed in a more socialised democratic context – one which I would hope advocates of a future Indy Scotland will share.